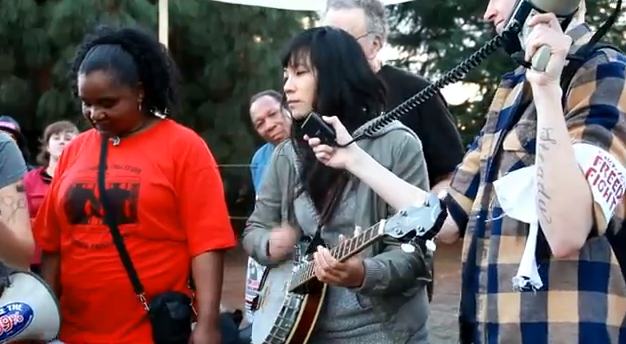 Thao Nguyen plays “We the Common” on banjo, through a megaphone, at a prison (playing Underground Arts on 3/23)

For all their snappy indie-rock hooks, Thao and the Get Down Stay Down are activistic folksingers at the core. In this new video, we see frontwoman Thao Nguyen performing at the Chowchilla Freedom Rally at the Central California Women’s Correctional Facility on Saturday, January 26 – which spoke out against overcrowding in the state’s prison system. Nguyen delivers a powerful, crowd-participatory performance of the title track of her new record We the Common, and in it (since we were speaking earlier today of the many definitions of folk music) there’s a snapshot of folk in the 60s sense, as a vehicle for protest and social change. Watch it below; Thao and the Get Down Stay Down plays at Underground Arts in Philadelphia on March 23. Get more information at the WXPN Concert Calendar.