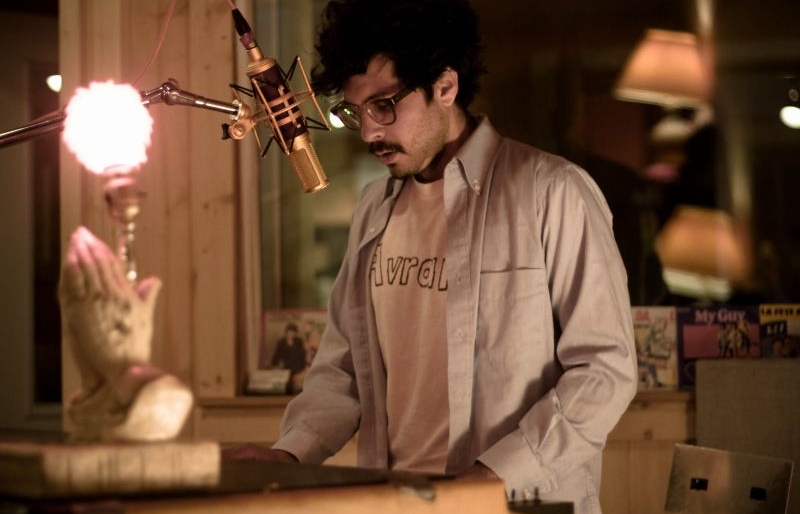 Yoni Wolf sounds like he could use a vacation, but instead he is going to spend the next couple weeks like he has spent the last couple months, sleeping in a bunk on a bus and preparing meals like a college freshman.  Luckily for all the Why? fans, the more Yoni may need to chill, the more he gets done.  The perverted romanticism and reoccurring death threats within Wolf’s lyrics constantly reel in and cast away the reader from a shrouded yet confessional protagonist.  With a headlining show at Union Transfer tomorrow, we caught Yoni post-practice and pre-dinner to talk Hot Plates, lyrical evolution and their brutal Pitchfork review.

TK: You posted a pretty tasty looking burger on your blog recently. Do you do a lot of cooking when home?

TK: How do you adapt that on tour?

YW: Normally you just try and eat whatever you can at restaurant, but this Tour I am actually bringing a toaster over and I bought a hot plate and I am going to cook for myself. Its my fist time trying it out, so I am going to give it a shot and see how it goes.

TK: Before releasing Mumps, etc. I saw you and your brother Josiah do a stripped down show at the First Unitarian Church in the Side Chapel.  How did that tour come about, and would you do something like that again?

YW: We might want to do something like that again. That came about because I had finished all the writing for the Mumps album, and we knew we were recording in May, and we just had that time free and decided to go out and try the songs out super stripped down. There was no real rhyme or reason, and it wasn’t a calculated promotional move, we just did it.  I would do something like that again some day, yeah.

TK: I have noticed a change in writing style between Elephant Eyelash and Mumps, etc.  Has the change been a conscious decision or more of an organic evolution?

YW: It is an organic evolution, but that being said, I think one of the things that happened is that I started writing in rhyme. Before that I never wrote in rhyme. In fact, I looked down on people who did that, in a way.  Me and Adam Drucker (Doseone), we would write whatever and then figure out how to make it rhyme later, kinda. And we always thought people who wrote rhymes, couplets that rhyme and the end of the line, we thought that was too easy.  And then later I found it and fell in love with it.  You just have to work harder to not make things cliché.  But, I think, if you use rhyme to your advantage it can be very be very powerful, and it can be very fun, and can add another whole set of challenges. I think since the Elephant Eyelash times I have gotten much tighter with my writing. I don’t know what I will write next or how it will be, but I will try and let it be a natural thing and have it come to me, you know.  But yeah, I just got tighter and tighter as time went on.  I don’t know where I am going next, but I feel like I need to relax a little bit.

YW: Yeah, just loosen up a little bit, for my own health, for my sanity.  I like the way Mumps came out, but it was a total mind fuck to do it all.

TK: You’ve mentioned that songs from the Sod in the Seed EP, specifically “27” were some of the favorite from the lot, but just didn’t fit on Mumps, etc.  I was wondering what you meant by that.  Did “27” not fit atmospherically or tonally? Or was it lyrical?

YW: I think it was the vibe of the song. It feels lighter.  It’s not the subject matter, I don’t think, other than the fact that there were no other references to that relationship within the album, so it felt a little weird having it in. The subject matter could have slithered in somehow, but I felt the vibe of it, and the other guys agreed as well, was too whimsical or something, with that push and pull thing and the chords, it just didn’t fit right.  For a while I had it between “Bitter Thoughts” and “Paper Hearts”, I just couldn’t make it work and I had to get it off there.

TK: You have released the demos for Alopecia, Eskimo Snow, and Mumps, etc. Is if fair to compare that to a writer releasing the drafts to their story or poem?

TK: You have a line on the new album, “men and women might yet quote his modicum of the truth/ But never will they get right close to Jonathan Avram Wolf” Do you desire to keep a distance from your audience?  Or is it something that you find is inescapable?

YW: I don’t know.  It does happen though. It can be a tad isolating too, it is weird.  The whole business of all of it is a little weird, but yeah, I don’t know, it does seem like it happens.  It’s weird. There is a closeness though, you know, that I’ve had with a lot of people that have heard and listened to a lot of my pretty intimate thoughts, but it’s a one way street, you know. So you kind of think at some point you feel like you are invisible unless people are watching you or something like that, it is a weird occupation that I have.

TK: Does that scare you, the thought of not making music and being in the public eye?

YW: I am decently healthy about it. I’m not on drugs and stuff, paranoid and freaked out.  Nah, I’m alright.

TK: You have done some producing in the past, most recently with Serengeti.  How do you like producing and how does it compare to working on your own stuff?

YW: Oh I love producing.  That is, like, my favorite thing.  Especially working with an artist that you really like, their lyrics and stuff like that, its’ great. That is where I really have to draw blood is the lyrics, the other stuff is really easy, it’s just kinda fun.  Lyrics in a way can be more satisfying at times, but I love the craft of producing, I just love working on something until it sounds right.  You know, it’s different than working on my own stuff, but it’s also similar.

TK: Did you have any part in the Dream Tiger LP?

YW: No, I didn’t have any part in the LP I don’t think, other than I wrote some of the music for one of the song she covered. I don’t know if it’s on the LP. Me and my friend Anna wrote a song, we have a project called Divorcee that I am actually finishing up an EP for in the next couple days, and Liz covered one of our songs, but I can’t remember if it’s going to be on the full length or not. I haven’t heard the full length all the way done yet.

TK: But neither version is released yet?

TK: Your show in Philadelphia happens to be on Valentines Day.  Any thoughts about the Holiday?

YW: It’s a lonely holiday for those of us who don’t have no one, but I am sure it’s great for other people, but probably not actually.  If you have a significant other then it’s stressful.  It seems like a stressful holiday but maybe that’s because relationships stress me out.  I like Christmas.  I am Jewish but give me Christmas over that one.

TK: I wanted to know your thoughts about the Mumps, etc. Pitchfork review, and how you felt about someone getting paid to write it?

YW: I feel like the pitchfork review was whack.  It was bogus.  The guy was malicious, and it was bad for us because they have so much weird power. I think it is waning now, I don’t know anyone who looks at Pitchfork personally, and I think they will be less and less important over time, but they still have a lot of power.  I felt pretty wronged about it and I don’t agree with anything he said, really.  I feel like it was just an attack, which I don’t think journalism should be. It almost seemed like a joke.  Like he was seeing how mean he could be.  Like, how much can he really roast this guy, but it wasn’t roasting in a fun way, it was seriously malicious.  It made me seriously question the dude. I am not making art as weapons, you know, to be shot back at. I am being true to myself and making something that I feel is what I want to say as art, it’s not pointed at anyone, it’s not mean or anything like that, so it is strange for someone to respond to something I do with such acid, you know what I’m sayin?  It was a bit surprising to me.

The positive way to look at it is that we’ve gotten to a level where this dude feels like it’s not even cool to listen to Why? anymore.  It’s gotten to a level where it’s okay to bash me. Otherwise it just looks really, really bad, you know, if he squashed this guy that is just budding or something, but I guess I’ve bloomed to the point where he can cut me off the vine and burn me, so I guess that’s good for my achievements.

Why? performs with Astronautalis and Dream Tiger at Union Transfer, 1024 Spring Garden Street. For tickets and more information on the all-ages show, go here.