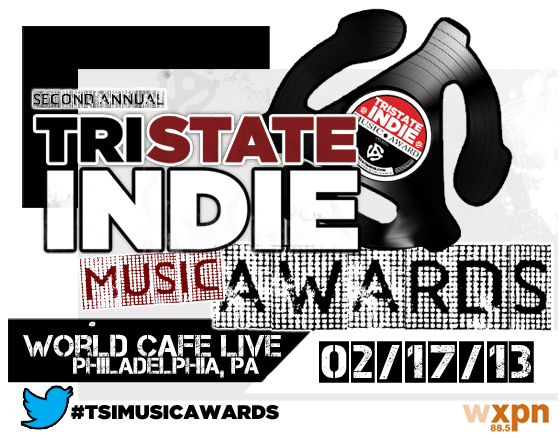 This Sunday night, our friends at Tri-State Indie are throwing their second annual awards bash at World Café Live. Dozens of artists, local and national, are competing in almost 30 categories, with a slate of performers lined up as well. Last year’s show was a lively spectacle. Here are five things to look for this year. 1. Philly music folks decked out in their finery on the red carpet

Confession time: red carpets make me uncomfortable. It’s totally not my scene. I’ll probably be hiding in a corner somewhere when the various nominees and presenters file in to World Café Live starting around 5:00. But even I’ve got to admit that it was fun and kind of inspiring to see musicians, bloggers, DJs and producers queued all the way up the World Café staircase, decked to the nines, during last year’s awards. Some folks just adorned scraggly jeans with a suit jacket and tie. Others went all out, with sharp suits, fancy dresses and, uh, costumes (pictured). When you work in a dress-down industry, it’s a rare and kinda nice occasion to see your peers get so excited about dressing up. Kuf the man was everywhere at last year’s event. Performing onstage with his band, hosting the show between songs, working the crowd when he wasn’t doing that, singlehandedly striking the stage and loading out the backline out after the show was done, shutting off the lights and locking the doors. Okay, maybe some of those aren’t true. But this year, Kuf’s role is a lot more low-key; he’s nominated for Indie Hip Hop Artist of the year, he’s presenting an award for National Overall Indie Band of the Year, and he’s also performing at a pre-game show of sorts. Aside from that, he’ll be relaxing and enjoying the festivities. Which he earned after working so hard last year, no doubt. But there’s always room for more Kufie. Maybe he’ll be inspired to spit a verse on a Sweet Leda or Nicos Gun song. Speaking of Sweet Leda and Nicos Gun, those are just two of the artists whose music will keep the show moving at a brisk and lively pace. Also in the mix are Wilmington folkies New Sweden, West Philly pop-rockers Cold Fronts and a whole bunch more. These are familiar names to those who frequent Philly’s live music scene, so if you haven’t gone to a show in the past few years, here’s your chance to catch up.

4. Me, presenting an award for Philadelphia Indie Rock Band Of The Year

Golly I hope I don’t screw this up. I know all I need to remember is the band names and “The award goes to,” but still…the PRESSURE. I do know that the nominees in my category are Toy Soldiers, Cheers Elephant, and Hop Along – all bands I’ve recorded for The Key Studio Sessions, all good people and solid musicians, all worthy contenders. We’ll see what the voters chose. The TSI folks, once again, have brought in Vitamin Water as a sponsor of the event. And Vitamin Water, in all likelihood, will provide more Vitamin Water than anybody knows what on earth to do with. Last year, a few days after the TSI Awards, I ran into Kuf at the SoFAR Philly show starring The Spinto Band. He offered to give me a ride to the Broad Street Line from the Kensington house hosting the show, and upon opening his car door, bottles of leftover Vitamin Water literally spilled out. His car was stuffed floor to ceiling with hundreds of them. Yellow Vitamin Water. Fuchsia Vitamin Water. He opened his trunk for me to stash my camera bag, and that was brimming with Vitamin Water too. And when we got to Broad and Girard, he would not let me get out of the car until I was loaded down with every ounce of Vitamin Water I could possibly carry. Okay, again, kidding about some of this. Maybe. But arrive thirsty, since you’ll likely be able to score a case or three.

WXPN Welcoems The Second Annual Tri-State Indie Awards to World Cafe Live, 3025 Walnut Street, on Sunday February 17th at 6 p.m. Tickets are available at the door, or through the World Cafe Live website.