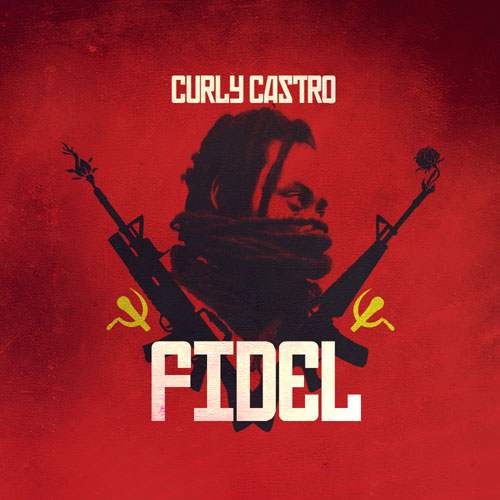 Unlocked: Read The Key’s review of Fidel by Curly Castro

Philly rapper Curly Castro isn’t trying to be shocking for shock value, he’s not provocative without substance – he wants to make you think.

Yes, the emcee born Kinte McDaniel took his stage name from the Cuban leader widely regarded as a despot in the United States. By calling his sophomore album Fidel, he pushes that parallel more to the front – something that, depending on what political era the listener grew up during, what part of the country they were raised in, and so forth, might be read as a massively controversial statement.

But there’s another thing that the record’s title does – it humanizes its polarizing namesake by using his first name, the familiar form of address. When I interviewed the emcee, he discussed this very conscious decision – he’s a human being, as we all are human beings, and the new album is a reflection of the journey of humanity from pre-post-racial America to the world today. It’s a world where problems persist, but are addressed in a lively manner through Curly Castro’s funky / jazzy / cinematic hip-hop tapestries.

The moniker is the subject of the opening song, “Call Me Castro” – it’s about him reading up on revolutionary figures and shaping his own character accordingly. “When I finally knew the deal than I turned Bobby Seale,” he raps, a nod to the co-founder of the Black Panther party. “I settled some scores and now I’m ten points up.”

The Wall of Sound-sampling “Starch” is the first of many figurative songs on the record. It’s a three verse story (with a great guest spot from Philly’s Has-Lo, part of Castro’s Wrecking Crew collective) that involves a shakedown at the 24-hour laundromat at Sixth and Girard. Through the comical story, Castro weaves a tale about gentrification.

Equally poignant, but more direct, is “Winter ’87.” The song’s “’twas the night before Christmas” verse gives it a nursery rhyme undertone, but as Castro reminds us, it’s a “true story – and I’m not just sayin’ that.” Over samples of Vince Guaraldi from A Charlie Brown Christmas, Castro tells about one holiday growing up in the Bedford-Stuy section of Brooklyn where his mother and siblings were robbed in an elevator on the way home from a family holiday gathering. The choice of the music takes something that much of America has a very specific, sentimental association with, and spins it to say that, well, for some other folks, this is what Christmas is like.

“Coal,” a song out of a David Lynch soundtrack which we heard in yesterday’s featured download, also works in the world of parable – which is the distinct difference between this album and Castro’s 2011 debut, Winston’s Appeal. That time out, he was overtly relating his own story in a straightforward narrative – this time, the songs reflect back on his life, but through metaphor and allegory. The most entertaining example of this is “Colored Water Fountain,” where Castro sings a jingle for a restaurant in a Louis Armstrong voice, but uses the restaurant as a way to enact a twisted revenge on notable bigots of modern society.

Elsewhere, an extrapolation of Johnny Cash’s “Cocaine Blues,” could be interpreted as a simple chauvenistic party cut, but it works in a few other ways as well. There’s the empathetic, unflinching account of a hardened criminal – something not unlike Truman Capote’s In Cold Blood or Norman Mailer’s The Executioner’s Song. There’s also the parallel it draws between rebel country music of the 50s and rebel hip-hop a half century later – topically, they’re not all that different.

With Fidel, Curly Castro’s ambition continues to grow as his songs become more lyrically sophisticated and musically pointed, but also energetic and engrossing. It’s not without its challenges – Castro’s voice is always so much in the forefront, that it’s all but impossible to allow his heavy topical matter recede into the background, and just listen because you want to bump a high-energy track. Castro wants to capture that energy and transform it, putting it towards examining the rights and wrongs and inbetweens of society. And with Fidel, he succeeds in a massive way.

Fidel is the featured album in this edition of Unlocked; hear the spotlighted single “Coal” in yesterday’s post, and check back later in the week for interviews, video and more.