On a recent Thursday morning, I went to the new headquarters of TSVG, the boutique effects pedal company that relocated from West Philadelphia to the Fairmount neighborhood a few weeks ago. “Headquarters” is actually the home of Mike Klein, the pedal designer who founded TSVG in 2011. He has two designated workspaces in his new home, one in a small spare bedroom, and the other in the basement. Making pedals is now Klein’s full-time job, but he claims there aren’t any plans to move TSVG into a larger, separate workshop.

“I really don’t need any more room than I already have,” explains Klein while standing in his kitchen. “It’s not like there are a bunch of people working in here. It’s just me and sometimes one other person. I eat my breakfast, and then I go downstairs and start making pedals. That’s what my days are like now.”

Klein’s living room is doubling as a conference room this morning. On top of his coffee table are the six pedals TSVG is currently pushing: a fuzz box called the Angry Jeff; the Emperor, an overdrive pedal; two boost pedals called Hard Stuff (one designed specifically for basses, the other for guitars); a 1960s/70s-inspired fuzz pedal called Keystone Fuzz; and the Red Eye, an overdrive pedal TSVG’s website describes as “perfect for living out your ‘Arena Rock’ fantasy.”

Sitting around the table with Klein are his high school pal Perry Shall, whose artwork appears on all of the pedals, and Yamil Emedan, a longtime friend who has recently become Klein’s apprentice. All three of them are pedal-junkies who play in local bands. Shall’s in Dry Feet, Emedan is in Can You Canoe and Tortuga, and both Klein and Shall are in Hound. As you might expect, they all use TSVG pedals. 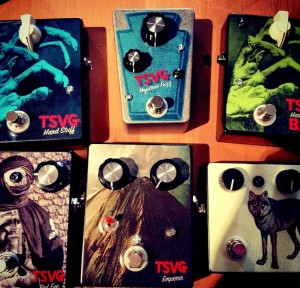 “I’ve played a million boost pedals before, but these are the first ones that actually work,” says Shall, who admits he’s incredibly biased. “Most boost pedals just don’t boost. I play loud music all the time, and these pedals really explode, man!”

Shall’s not alone. Among the musicians currently using TSVG pedals are Best Coast’s Bobb Bruno, Screaming Females’ Marissa Paternoster, Circa Survive’s Brendan Ekstrom and Philadelphia guitarist Nick Millevoi, of Many Arms. “The Hard Stuff pushes my tone into some seriously aggressive territory,” says Millevoi. “I’ve never used another pedal that’s able to overdrive my amp in this way. The fact that it’s hand-wired point-to-point is a serious bonus. I think it gives them a vintage tone you won’t find on any pedal that was built from a circuit board.”

After graduating from University of Delaware with a degree in economics, Klein got a job working for a big mutual funds company. He began making pedals as a hobby, learning through trial and error, and by tweaking other people’s designs. He gave friends in bands some of his pedals to sample, and all of them had positive things to say. He’d been planning to quit his job (which he hated) to start an online amp and guitar shop, but instead decided to start selling his pedals. Klein is confident he has made the right decision, as TSVG is quickly carving out a niche market for itself.

“The pedal market is saturated with crap,” says Klein. “They’re built on awful circuit boards, and with cheap parts, but they cost $300. A machine can’t make the pedals we build. I make each one with my hands, and I take my time. From start to finish, I have a physical connection to every single pedal. Every pedal is a labor of love… each one is a piece of art.” 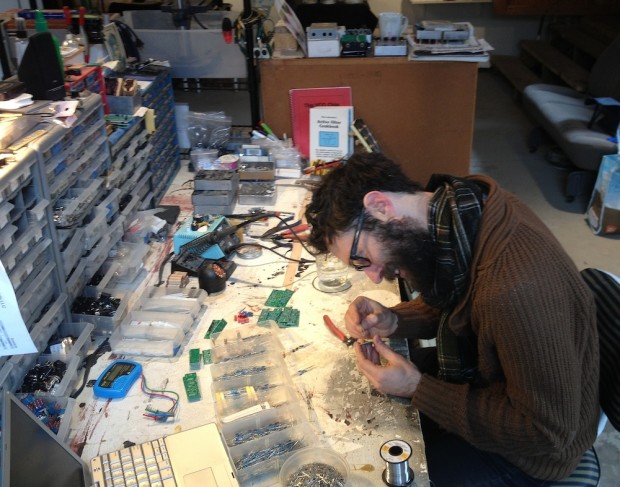 TSVG isn’t the only boutique pedal company in Philadelphia these days. A few miles away, in Fishtown’s Viking Mill building, is the studio headquarters of smallsound/bigsound. The pedal company was founded by Brian Hamilton in 2008, and has been based in Philadelphia for about three years. Like the team at TSVG, Hamilton is also a musician. He studied at Berklee College of Music, and currently plays keyboards in Cymbals Eat Guitars.

Hamilton started making pedals back in college, when he became interested in sound design, and when he discovered that other boutique pedal companies were unable to build exactly what he wanted. So he started making them himself. “At first I was just Frankenstein-ing different circuits together,” says Hamilton.“I still don’t know what everything does, but I learn so much by just tinkering. I took a few to Main Drag, a music store in Brooklyn, and they agreed to sell some. They sold really quickly, so then I realized I was onto something. There was no website or advertising, it was all just word-of-mouth.” 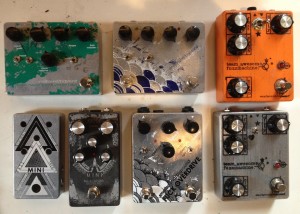 With the exception of the screenprinted graphics that appear on the pedals, Hamilton does all the work himself. Smallsound/bigsound currently has four pedals available: two fuzz pedals named Team Awesome! and the Hawk; a big overdrive pedal called Fuck Overdrive; and a “slimmed-down” version of the Fuck Overdrive called the Mini. Some of the musicians currently using Hamilton’s pedals are Grizzly Bear’s Chris Taylor, and members of Les Savy Fav and Modest Mouse.

Having worked as a touring musician for many years, Hamilton thinks his pedals will meet the needs of other working musicians. And, as most pedals are designed for guitarists, he feels his experiences as a keyboardist and synth player allow him to approach pedal-making from a unique perspective. “I’m always on the road playing tons of rooms, so I know what works and what doesn’t,” says Hamilton. “I can make pedals that work for many different, unpredictable environments. Also, I’m not a guitarist. I’m coming to sound design from more of a modular synth approach, and synth players think about making sound in a way guitarists do not.”

“But I’m always striving for something more and something new,” says Hamilton about building a pedal that sounds exactly how he wants it to sound. “It’s a lifelong quest.”