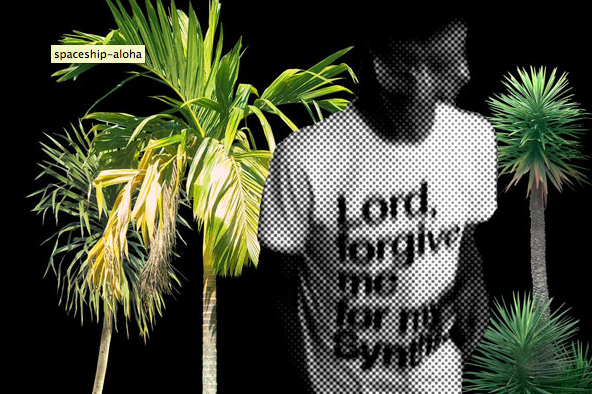 Perhaps it’s because he’s a drummer, or maybe he’s a drummer because of it, but Chris Powell has a knack for juggling multiple things at once. Onstage behind a kit – in present day avant-popsters Man Man and going back a dozen or more years with his formative group Need New Body – it’s rhythms, tempos and even percussion instruments Powell mixes up. In a broader sense, it’s projects: he’s a producer and collaborator with Grant$, a band leader with Adventuredrum, and a cosmic one-man dance-maker in his new-ish electronic project Spaceship Aloha.

Last year, Powell launched the Spaceship with Universe Mahalo: Volume #1, his debut LP on the local experimental label Data Garden. It’s a heady potpourri of body-moving dub beats, exotic tropical instrumentation, futuristic electro-pop textures, and samples of that lean both towards science fiction (humming lasers, pinging radar) and summer vacation (breezy surf and seagulls). The followup, Tropical Information Systems, will be out this summer on Data Garden, and tonight he makes his second-ever live appearance at Johnny Brenda’s, opening for Mouse on Mars – who rang among his electronic music heroes. Powell and I swapped emails to get to the root of Spaceship Aloha.

The Key: The project emerged when you got married in Hawaii a few years ago. Was that trip your first full-on exposure to Polynesian music? What about the music hooked you so much?

Chris Powell: I’ve been obsessed with Hawaii ever since childhood. It’s this beautiful, magical, exotic, tropical destination – I love the vibe of Hawaii generally, and the music is a big part of that. But I’ve been familiar with Polynesian music since I was very young, thanks to growing up in a part of the country with wonderful local radio stations that played music from all over the world.

TK: The sci-fi / spacey electronic element of the band is great, because for the listener, it’s such an unexpected sonic twist. I have a hunch, however, that for you it was a natural fit – of course you’d think to mix the two styles! Is that right – did it come together really that quickly? Or was it more of an evolution?

CP: The sci-fi sonic style comes very naturally to me. I’m a huge science fiction fan – it just makes sense that those sounds would make their way into my music. I love the old sound effects that were used for UFO’s and spaceships. The Jetsons‘ sound design is amazing. And in terms of fantastical and exotic travel, it doesn’t get much more fantastic than outer space.

There was an evolution, to incorporate sci-fi elements into this work – but it was mostly sorting out what instruments, synths, and sequencers worked best for creating these sounds. Working with local synth makers Critter & Guitari has been a huge opportunity – I’m using their synths to take the music to new places.

TK: The incorporation of different instruments really jumps out – the uke, the acoustic guitar, the horns and strings. Is that you playing all that stuff (in addition to the stuff that’s more obviously sampled)?

CP: The instruments on Universe Mahalo: Volume #1 are mostly sampled, though they are chopped up, performed, and played like drums and keyboards. There are multiple layers constantly working together at all times. All sound sources and instruments are resampled and re-contextualized. There’s a lot more acoustic instrumentation in the newer material, though it’s drastically different from song to song.

TK: For the part that is culled from samples, what were you seeking out in source material?

CP: I used some random elements from the older Hawaiian pop songs (kick drums, bass notes, guitar strumming) that were playing on the Maui radio stations in heavy rotation during my visit there. Most of the samples on Universe Mahalo: Volume #1 were chopped up from YouTube clips. YouTube is an absolute goldmine when working on collage-style sound design. I also used old tapes of music I recorded from the radio when I was about ten years old.

TK: With all your other musical projects, how did this fit in? Were you tracking Spaceship Aloha songs on the Man Man Tour Van or between takes during the Grant$ sessions?

CP: I keep getting less and less sleep, though I seem to have worked out getting just enough to maintain and keep sharp enough through the days! I was working on new Spaceship Aloha material all during last month’s Man Man tour, mostly in the van. It takes awhile to figure out what you can do on the road but I now have the perfect tools to work while traveling from city to city.

TK: I saw your set at Bartram’s Garden last year for the Data Garden show. Was that your first show, and have you performed much since then?

CP: The Bartram’s Garden Oct show was my first live set as Spaceship Aloha. This will be my second show on Monday. I’ve been hard at work on the new Spaceship record, as well as the new Man Man and Grant$ records, so I decided to wait a while before taking on any other SA shows. I’m also a big believer in not performing too much in town. It keeps things fresh and exciting.

TK: I loved that your live show is such an audiovisual experience. To what degree does the imagery inspire the music? Do you use songs to score scenes, or do you make music first and then find footage etc. to pair with it?

CP: The Bartram’s show was a great experience, because I always wanted to work with visuals in a live setting. I think of music visually – I was a visual artist first, so it comes naturally to think about how to expand a live show past the music. Data Garden curated the visual performers for the Bartram’s set. I invited Michael Dur to collaborate with me on the visuals for tonight’s set at Johnny Brenda’s.

TK: Tonight, you’re playing with Mouse on Mars, one of your favorite electronic bands. What about them do you dig? Have they influenced your own writing?

CP: Mouse On Mars is the reason I make electronic music. They have always been so far ahead of the curve, it’s dizzying. This last record MOM released is rhythmically compelling, and compositionally adventurous – the sonic landscape shifts though rhythms and melodies so quickly, it always sounds fresh. They have profoundly influenced my writing, performing, and how I approach music overall. Simply put, they’re my musical heroes.

Spaceship Aloha performs tonight with Mouse on Mars at Johnny Brenda’s, 1201 North Frankford Avenue. The 21+ show begins at 9 p.m., tickets and more information can be found at the venue’s website.