The SXSW PHL showcase wasn’t the only place to see musicians from the Delaware Valley last week. A wide variety of musicians from the region made the trek, with a wide variety of approaches. For instance, Wilmington’s New Sweden did the barn-burning powerhouse thing, not only playing a packed tour on the way down, but jamming in an impressive (and as yet unquantified) number of SXSW showcases into its itinerary between Monday and Saturday. Other artists took it light, by comparison. 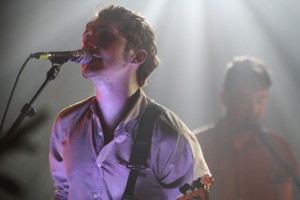 We caught Kenny Vasoli’s Vacationer in their last show of South By Southwest on Saturday night at the infamous Hype Hotel venue, sponsored by The Hype Machine. It was the breezy electronic pop band’s second of two shows, and the relaxed pace left Vasoli in the most exuberant of exuberant moods during their set.

“This has been the best experience I’ve ever had at South by Southwest,” he reminded the crowd at uber-frequent intervals. Like, seriously, in between every song of their 30-minute set. “It’s been such a great few days, and I’ve got all of you to thank for that.” Back in his old pop-punk band The Starting Line, Vasoli probably got swept awat in the hammering gauntlet that the industry festival can be – hence the easygoing approach this time. He’s not alone. 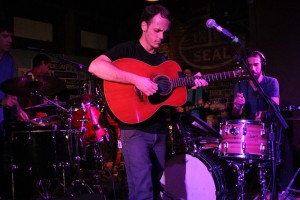 “We’ve come to South By every year for the past five years,” Aleks Martray of Grandchildren told me as he and his bandmates packed up the van after their only official showcase – Thursday night at the Medusa Lounge. “We only did two shows this year. Tomorrow we play a festival in Oklahoma on the drive back to Philly. It’s so much better this way.”

Martray says he too got caught up in the barnburner, fill-your-day-with-shows approach earlier on, but realized how exhausting it can be – and, as his band grew in complexity (and instrumentally), how logistically tough as well. “This is much more enjoyable,” he says. “We saw our label, we saw our friends, and we played a couple good shows.” The last one of which had Ryan “Honus Honus” Kattner of Man Man cheering them on. 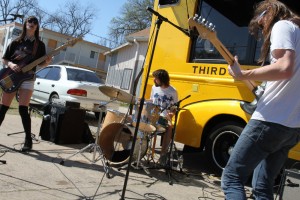 By comparison, Lantern took a more filled approach – at least a show a day – and had a generally positive experience. I caught up with them at a few points (Philly writer and regular Key contributor Elliott Sharp was tagging along with them, working on a long form independent piece on the festival and touring in general), and I finally took in a full Lantern set on Saturday afternoon when they played the Third Man Records Rolling Store showcase.

If you’re not familiar with this oddity of Jack White’s label – it’s a basically big yellow van with a PA built in, microphone inputs on the outside and a mixing console behind a sliding glass window. It pops up at random spots with bands in tow – this time, Lantern was featured along with Pujol performing in an East Austin parking lot. 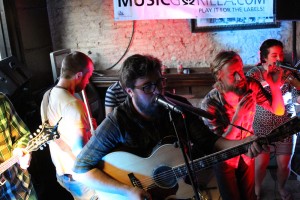 “This show and the showcase yesterday for Tiny Mix Tapes were probably our two best,” singer-guitarist Zachary Fairbrother told me. “Or the most positive. We played one showcase for [blog name redacted] and there were maybe 500 people there, but they were just there for the scene, they’re not listening and you can tell. The crowd at these past two have been here for the music. It’s a much better environment.”

Free Energy (pictured up top) played an exhuberant Saturday night set to a packed crowd at The Iron Bear – the scene of Bleeding Rainbow’s equipment carnage of last year, an uncanny coincidence since both bands appeared on a recent show at Arden Gild Hall. (Free Energy did not smash anything, however.)

In another coincidence, on Saturday evening I headed down Austin’s 6th Street – a scene of mayhem and madness that falls somewhere between Mardi Gras and the Philadelphia Folk Festival campground – making my way to a bar / venue called The Lodge to catch TJ Kong and the Atomic Bomb. When I arrived, the stage was still being set up, but I heard a very recognizable blend of acoustic punk fervor and violin in the near-distance. I poked my head next door, and saw New Sweden, wailing away to a packed bar for their final show. 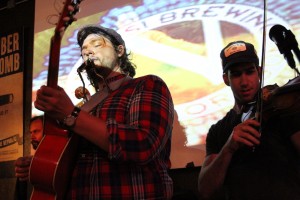 TJ Kong and the Atomic Bomb | Photo by John Vettese

I watched Kong and their gritty folk brethren and thought about their respective tactics: New Sweden playing near-constantly all week, Kong popping in and out at the end of the week. Each has their merits – getting your name out there as much as possible, versus playing it cool and avoiding burnout. Both played to crowds bobbing along to their raucous and enjoyable sound (especially to folks indulging in pre-St. Patrick’s Day whiskey drinks). Both handed out free CDs.

And both are probably in the same predicament in the end – the music may be listened to by people who have been grabbing free CDs all week, the crowd may remember them in a way more specific than “that cool folk band we saw on Saturday,” the band may have a somewhat bigger crowd the next time they play Austin on tour. Or their southwestern fan base may remain at the same level, and this will have just been an exercise in performing live and having fun on the road.

Which is all part of the gamble of the South by Southwest festival, and of a music career in general. When you have name recognition of Vacationer, Free Energy and Grandchildren – and the label support that two out of those three artists have – it’s easier to be relaxed at SXSW. When you’re going it your own, you’re playing by your own rules, and going H.A.M. like is an admirable and respectable option. But in the all-around scheme of things – the knowns, the lesser-knowns, the hectic and relaxed – all of these locals in Austin did Philly proud.