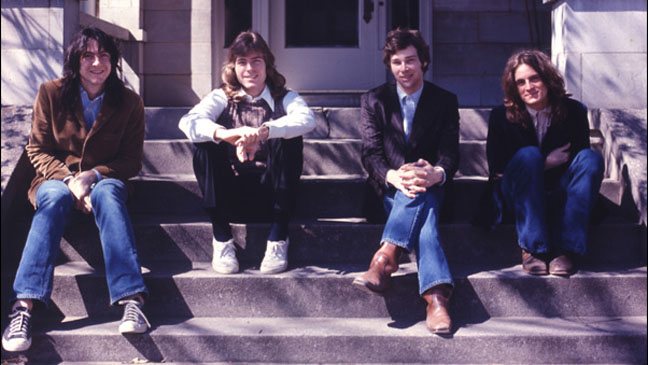 By John Vettese
March 20, 2013
04:03 PM
Share
Big Star: Nothing Can Hurt Me is one of the featured films in the Second Annual XPN Music Film Festival

The WXPN Music Film Festival returns for a second year this spring, April 12th-14th, and its lineup once again covers the musical and cinematic gamut. Blues fans can experience the southern juke joint circuit with We Juke Up In Here; b-movie lovers can nerd out to The History of Future Folk; 70s music buffs and present day indie heads can bond over the heartbreaking story of rock’s greatest unknown band in Big Star: Nothing Can Hurt Me; andjust about anybody over the age of 25 will have a blast singing along to Grease. Also in the mix are a screening of The Flaming Lips’ 2012 Halloween concert film Freak Night, a documentary on archetypal riot grrl Kathleen Hannah, the heartwarming Once in a Lullaby: The P.S. 22 Chorus Story, and many more. Check out the full lineup below; tickets and all-access passes are on sale to the general public on Monday, March 25th through the XPN website.

Big Star: Nothing Can Hurt Me (USA, 2012)
Director:  Drew DeNicola
Description:  Plagued by commercial failure, the career of critically acclaimed Memphis rock group Big Star never really lived up to their name despite being a key influence for groups like R.E.M., The Replacements and The Flaming Lips. This comprehensive documentary uses never-before-seen footage to detail the story of Big Star’s artistic and musical salvation.

Freak Night (USA, 2012)
Description:  A party, a concert, a portrait of fandom and a haunted excursion all rolled into one, this video document of The Flaming Lips’ famed 2012 Halloween show has enough blood, ghouls and goblins to keep you rockin’ all night long. Join us for a special costume/dance party screening of the Delo Creative’s beautiful concert doc.

Good Ol’ Freda (USA, 2013)
Director:  Ryan White
Description:  An intimate look into the life of the woman who spent 11 years working for the Beatles, Good Ol’ Freda is an endearing first person account of the hysteria surrounding the most popular band in music history. Centered around one in-depth interview, the Beatles’ former secretary tells all about the spiciest fan mail and the most hilarious interactions with John, Paul, George and Ringo.

Grease (USA, 1978)
Director:  Randal Kleiser
Description:  Put on your best leather jacket or poodle skirt for an exuberant adventure into the highest-grossing musical of all time! Telling the story of the two star-crossed teenage lovers, good girl Sandy and bad boy Danny, Grease is the unforgettable ‘50s-based classic we can all sing along to.

The History of Future Folk (USA, 2012)
Directors:  John Mitchell, Jeremy Kipp Walker
Description:  Earthlings – Meet Future Folk, a New York folk band duo whose “out of this world” origin is shared through this thoroughly original musical sci-fi adventure. Winner of the Audience Award at The Philadelphia Film Festival, this special encore screening will include a live performance from the band themselves.

Jake Shimabukuro: Life on Four Strings (USA, 2012)
Director:  Tadashi Makamura
Description:  At times hilarious, at times heartfelt, this inspiring documentary tells the story of Jake Shimabukuro, a brilliantly gifted ukulele player out to soothe the world with his beautiful Hawaiian sounds. Follow Shimabukuro as he teaches children and wows audiences, armed only with his tiny, four-stringed instrument.

Kinshasa Kids (Belgium, 2012)
Director:  Marc-Henri Wajnberg
Description:  In this lyrical hybrid of documentary and fiction, filmmaker Marc-Henri Wajnberg utilizes everything from staged scenes to animation to tell the empowering story of a group of Congolese street kids. Cast out of their homes under suspicion of witchcraft, the children decide to fight back against society by forming a band.

Los Wild Ones (USA, 2013)
Director:  Elise Salomon
Description:  Chronicling the history of the fiercely independent Wild Ones Records in LA, Elise Salomon’s documentary debut focuses on gritty Irishman Reb Kennedy, who builds a family of young Hispanic musicians to write and perform ‘50s rock n’ roll. Recognizing changes in the industry, Kennedy must figure out how to survive while staying true to his label.

Muscle Shoals (USA, 2012)
Director:  Greg “Freddy” Camalier
Description:  Miraculously birthed during a time of intense racial division, the legendary music studio Muscle Shoals brought blacks and whites together to create hits from some of music’s greatest artists. Greg “Freddy” Camalier’s engrossing documentary shows us how the studio produced the work of Aretha Franklin, Wilson Pickett, The Rolling Stones, Allman Brothers and Simon and Garfunkel, among others.

Narco Cultura (USA, 2012)
Director:  Shaul Schwarz
Description:  Interweaving four amazing stories, Narco Cultura paints a portrait of the iconicism surrounding contemporary Mexican outlaws known as “Narcos.” Building a brand around themselves, many Narcos have lyrical songs called corridos, written for them to detail their exploits. Shaul Schwarz’s Sundance hit is a gripping journey through the explosive collision between drugs, violence and pop culture.

Once in a Lullaby: The P.S. 22 Chorus Story (USA, 2012)
Director:  Jonathan Kalafer
Description:  On the eve of their big appearance in the 2011 Academy Awards, the country’s most prestigious and spirited public school chorus faces creative differences, lost voices and homesickness in this adorable documentary that celebrates youth and arts education to the highest degree.

Pleased To Meet Me (USA, 2013)
Director:  Archie Borders
Description: Based on Starlee Kine’s “Everybody Speaks Elton John,” Pleased to Meet Me stars John Doe and Aimee Mann as an aging punk rocker and his former producer who reunite for a single song.  The pair searches the classifieds and assembles a ragtag group of musicians to write, produce, and record a song in 24 hours.

The Punk Singer (USA, 2013)
Director:  Sini Anderson
Description:  Musician, feminist, provocateur – Kathleen Hanna is one of the revolutionary artists of our time. This eye-opening new documentary tracks the renegade spirit of Hanna, from her roots in Bikini Kill, through her subsequent projects of Le Tigre and The Julie Ruin, all the way up to her mysterious and sudden disappearance from the music scene.

Twenty Feet From Stardom (USA, 2012)
Director:  Morgan Neville
Description:   A hit at the opening night of Sundance, this rousing crowd-pleaser shines light on the untold story of back-up singers, the true heroes when creating a full musical sound. Legends from Bruce Springsteen to Bette Midler tout the greatness of these marvelous women in Morgan Neville’s captivating documentary.

Unfinished Song (UK, 2012)
Director:  Paul Andrew Williams
Description:  Shortly after the death of his loving wife, the disgruntled and reserved Arthur joins an unconventional choir for the elderly in an attempt to repair a relationship with his estranged son in this heartwarming drama starring Terence Stamp and Vanessa Redgrave.

We Juke Up In Here (USA, 2012)
Directors:  Jeff Konkel, Roger Stolle
Description:  Honoring the memory of the juke joints of Mississippi, Jeff Konkel and Roger Stolle’s toe-tappin’ documentary takes a journey through a time of transition, when many of these famous clubs switched to more economically viable options. After the screening, for one night only, World Cafe Live will transform into a juke joint with special live performances.