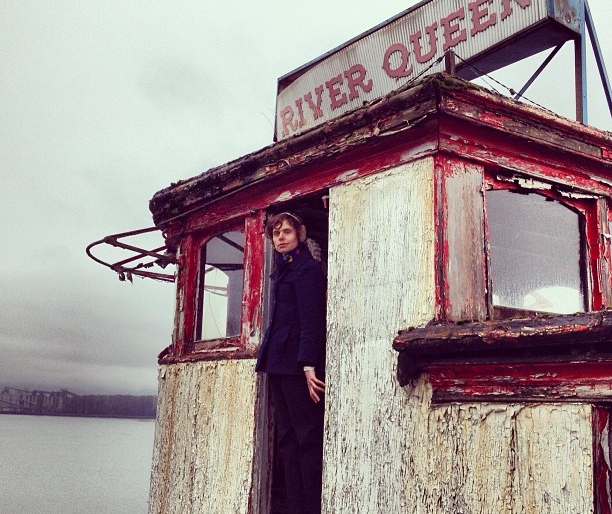 Parenthetical Girls are on a boat, playing PhilaMOCA tomorrow

The internet is a crazy place. You can find anything through a search. You can find an abandoned riverboat with a decaying dining room, or an Oregon winery that’s also part volcano. At least that was the Parenthetical Girls‘ experience. The avant-pop group teamed up with Pacific Northwest production company Into The Woods to film a 4-piece video series to promote its fourth full-length record, Privilege (Abridged), released last February.

The series focuses on group performances in delicately forgotten places across Oregon, including an old showboat still floating off of the Columbia River. The boat had no apparent owner and was in serious disrepair.

Zac Pennington, PG founder (and only remaining original member), says that the boat was even selling for one dollar on one of the websites they found. “We kind of stumbled upon this ship. Rodrigo Melgarejo, who was the director for this project, was trying to figure out a location that would be interesting and would fit dramatically with this idea of different notions of what privilege means. [Melgarejo] spent some time looking up urban exploration forums on the internet and he was deep in this thread of Portland area abandoned structures. We tried to get a hold of the people who owned it and we couldn’t find anyone.”

The ship shoot is the first installment in the series and features the androgynous front man in crisp white gloves, rainbow scarf and earmuffs bellowing “Curtains” with visible breath. His glamorous, dinner theater-like showmanship is the antithesis of the bleak, crumbling space and maybe the only glimpse of life that the retired vessel has seen since its heyday. It’s a perfect moment in two different times, a perfect contrast.

And then something even more perfect happened.

“About a week after the video came out we got a message on our Facebook page from a woman who had I guess been [searching for] the ship,” Pennington says, kind of still in awe. The woman turned out to be the granddaughter of the ship’s previous owners, who ran it as a restaurant. Pennington was nervous that this woman might be angry that they’d used the ship for the shoot, but she was the opposite.

“She was very excited [about the shoot] and upset about what had happened to the ship [since her grandparents sold it]. She told me she would be sending me photos of the inside of the boat so we could all see what it looked like in it’s prime. It was a very important part of her childhood.”

The group is currently touring for Privilege, calling it a “compiled, abridged version” of the five EPs that the group previously released (which were “hand numbered in blood, real fetish pieces” Pennington says).

“These are the 12 songs on the album essentially because it made sense to us to have it be a cohesive album. The other records were so limited that the audience was fairly small for those songs and we felt good enough about these [particular] songs that we wanted to have them next to a larger audience.”

While Parenthetical Girls has been around for over 8 years, the current roster has only played together for a few of the more recent ones. Pennington teamed up with drummer Paul Alcott after, he admits, the previous formation kind of “imploded.”

“It’s Portland, you know? Needlessly antiquated forms of communications. She knew about Parenthetical Girls and I sent her a package, she bought a CD online and I realized it was [being shipped] four blocks away. She even wrote me a ‘thank you’ note in response and we sort of got to talking and developed a pen pal-ship.”

Proof that the good ol’ fashioned internet isn’t the only way a search can furnish results.

Parenthetical Girls plays PhilaMOCA, 12th and Spring Garden, with The So So Glos and The Interest Group Saturday March 23rd at 8 p.m. More information can be found at the venue’s website. Be on the lookout for the rest of the Parenthetical Girls’ series to be released at intothewoods.tv, including the third installment, which was filmed on an old fashioned carousel during the off-season at a Portland amusement park, and the final episode that’s inside of a freaking volcano.