Interview: Local Natives’ Taylor Rice on Instagram, catharsis, and their favorite song to listen to right before a show - WXPN | Vinyl At Heart

Interview: Local Natives’ Taylor Rice on Instagram, catharsis, and their favorite song to listen to right before a show
WXPN Local

Interview: Local Natives’ Taylor Rice on Instagram, catharsis, and their favorite song to listen to right before a show

For over three years now, LA’s Local Natives have wooed audiences with their unique blend of Afro-pop guitars, lush vocal harmonies, and lively, frenetic drumming. Their debut record, 2010’s Gorilla Manor, was a gem of playful, sun-dappled melodies that launched the (previously little-known) group to the indie fore; a string of memorable, high-energy shows helped cement their status as a band to watch.

Now, three years after Gorilla Manor’s release, Local Natives are back with Hummingbird, a decidedly more introspective record that forgoes boisterousness in favor of more nuanced, emotional growers—like the rich, sweeping “Breakers” and the stirringly gorgeous “Colombia.” The record, the band has shared, was inspired by both personal growth and tragedies, such as the death of vocalist/keyboardist Kelcey Ayer’s mother and the departure of bassist Andy Hamm.

Now the band is on the road supporting Hummingbird,and will play Union Transfer this Thursday, April 4. We caught up with singer/guitarist Taylor Rice a few days before the show…to talk Instagram, catharsis, and their favorite song to listen to right before a show. 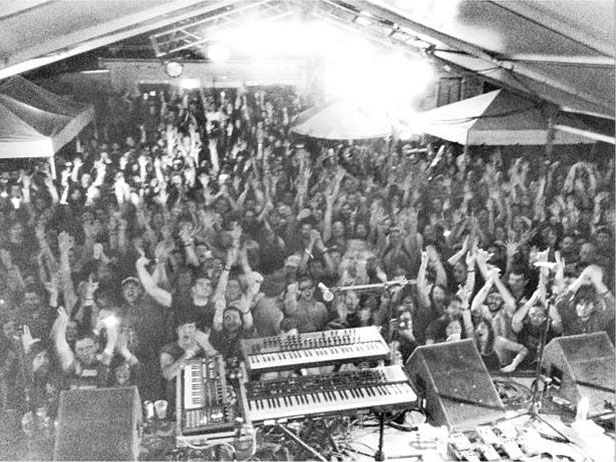 The Key: I love following you guys on Instagram and seeing all the amazing places you visit. Who’s in charge of the band’s Instagram?

Taylor Rice: It’s a communally-shared task. Most of the photos probably come from me or Matt, our drummer. If you’re referring to the crowd shots, those come from Matt. Usually at the end of each show, Matt will take a photo of the crowd, which is fun.

TK: So you guys have been very open with the press, as far as delving into some of the driving forces behind Hummingbird—did you guys make a conscious decision at some point to share the details?

TR: We did a make a conscious effort. It was something we talked about, and actually there’s quite a lot that we left out. You know, it’s one of those situations where we don’t want to share everything, but at the same time we did make a decision to talk about some of the things that were really important, just to be direct and honest. It is a very direct and personal record.

TK: Do you think people listen to Hummingbird differently knowing the back story?

TR: Maybe…yeah. I think it can have an effect if you’re in the same emotional spot. But I’ve also heard a lot of people say they think a particular song is about… something that it’s absolutely not about. So that happens too.

TK: Since Gorilla Manor, you guys have grown exponentially in popularity—you toured with The National and The Arcade Fire, you were on Jimmy Fallon, etc. How has the day-to-day life of the band changed as a result? How are things different now, than say three years ago?

TR: Well, on this current U.S. tour, one major change is that we actually have a little more free time, because we have a couple more helping hands to help us set up and sound check and that gives us more time to visit every city we play in. Touring can definitely be a whirlwind of venues sometimes and far less glamorous than I think people on the outside realize. But it’s been really awesome to have time to ourselves and to investigate the cities we’re in.

TK: I saw you guys last time you came to town, and it was such a joyous, celebratory vibe, which I also sorta got listening to Gorilla Manor. Hummingbird, of course, is a bit more nuanced and emotional—how does this change your live show?

TR: The record is maybe less buoyant and energetic than Gorilla Manor, but it’s a very cathartic record, and there’s this undercurrent of joy and catharsis throughout, so playing, especially live, our music tends to take on its own communal, celebratory energy. This tour is also really fun because now we have two records, so we’re able to play music from both, just trading out songs every night. It’s the first time where we actually have more songs than we can play live in a night. So it’s worked really well having the two records to pull from.

TK: Do you have any traditions or rituals you use to get psyched for a show?

TR: (laughs) We have a little ritual to get ready where we kinda take a moment, and get psyched. And every tour has a different song that we play we beforehand. (Pauses.) Do you remember where you saw us last time we toured?

TK: It was upstairs at the First Unitarian Church in Philly.

TR: Ahh. That tour, I think we played [Prince’s] “I Would Die for You” before we would go on. This tour, we’re doing “Young Americans” by David Bowie.

TK: Nice! So do you guys just sit around in a circle and listen to “Young Americans”, or do you all fist-pump and do a little dance?

TR: (laughs) That will remain behind the curtain. But definitely part of it is getting psyched up together.

TK: So you guys spend a lot of time in the van. What do you like to listen to on the road?

TR: Tons of stuff.  Lately, the new Nick Cave record, and the new Atoms for Peace record, Amok. Those are my most played…I think they’re both really incredible records. But we’ve been listening to tons of new music, and also we have our faves. Like I had a pretty intense Leonard Cohen phase. My obsession period is sorta over for now, but I’ll return to that later I’m sure.

TK: What’s coming up next for you guys?

TR: Well, the tour goes until early April, and then after that, we head over to Coachella. That’s actually a really big deal for us; it’s one of our favorite festivals to play because it’s the one that we all grew up going to. We’re all from Southern California. So we’re really excited about that one.

Then after that, it just keeps going, like, forever. After Coachella, we have a West Coast tour…then we have a few days off, and then we go to Australia. Then it’s festival season, and then another tour.

TK: Wow, that sounds crazy!  Any immediate plans to make a new record?

TR: No, no, no, not yet (laughs). We’ll definitely work on music on the road, but with this [last] record in particular, it was really important that we took our time. The way that we write is very collaborative and communal, so it’s hard for us to really be in record mode unless we’re giving EVERYTHING to that. So when we’re touring, it’s a good time to write and be creative, but it can be hard to really focus and think about the big picture.

But it’s hard to even THINK about another record now, because it still feels like this one is just kicking off. And we’re still getting comfortable with it. So a new record feels distant at this point. For now, we’re focusing on Hummingbird.

TK: We don’t blame you, and can’t wait to hear it live!