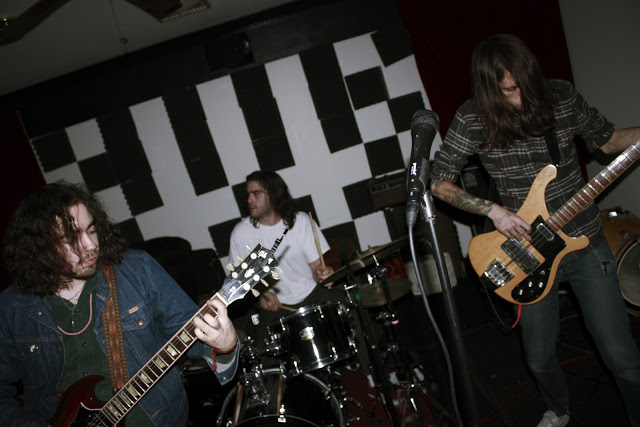 Interview: Keil Everett of Tin Horses on guitar jams, writing on the road and his favorite Dinosaur Jr. album

Not to be overshadowed by his gig in Philly noisemakers Purling Hiss, singer-guitarist Keil Everett and his band Tin Horses released their second LP, A Life Of Trouble, earlier this month as a free download on their Bandcamp page. Everett started the group as an outlet for his own songwriting style – a mixture of twangy Americana and long, gritty guitar freakouts reminiscent of Neil Young’s work with Crazy Horse (if they were into late-80s’ indie rock like Dinosaur Jr). Despite being busy with the release of Purling Hiss’ new album Water On Mars release last week, Everett took some time out of his hectic schedule to swap emails with The Key about the origin of Tin Horses’, playing guitar versus playing bass, creative influences and more.

The Key: Who is Tin Horses? How did you all meet and start playing music together?

Kiel Everett: Currently, Tin Horses is Kiel Everett, Mike Sobel and Patrick Hickey. I met both these guys working at a job years ago and played music with them individually at random points. When the idea for a band came up, they were the guys that I wanted to play with.

TK: Band names can be difficult to come up with. Was that true for you guys? Where did the name Tin Horses come from?

KE: Before Tin Horses I was doing more of a solo acoustic sound, I had the name Ol’ Balthazar. When we started playing and writing together, it naturally became more of a rock band, so Ol’ Balthazar had to go. Before practice one day I was looking through a notebook and saw that I wrote down the words Tin Horses long before and decided that’s gonna be the name of this band. I don’t like to think too hard about things.

TK: Kiel, I know you’ve been pretty busy lately as the bassist in Purling Hiss. How do you manage doing both bands?

KE: I’m always thinking about Tin Horses, that’s my band and my creative outlet. I was doing Tin Horses long before I started playing with Purling Hiss. Even when The Hiss is on the road I’m writing the new batch of Tin Horses songs. That’s how I wrote A Life of Trouble, on tour.

TK: What have you been playing longer, guitar or bass?
KE: I’m a guitar player, started when I was 16. I never really played bass, never in a band, not until Purling Hiss. Bass is a real tough instrument especially if you want to be good. I still don’t consider myself a bass player.

TK: How does your approach to the song writing process differ between bands/instruments?

KE: Well, in Tin Horses, I write the songs (lyrics, guitar). Pat and Mike write their parts to the music. In Purling Hiss, Mike Polizze writes everything, I just play it.

TK: There is a interesting balance on both Tin Horses between acoustic based songs and longer electric guitar jams. Were the longer songs like “Hitch-Hiker in the Wind”, “Dead Horse,” and “A Life of Trouble” written that way or is there a lot of jamming/improvising on the extended instrumental parts?

KE: When I write songs it all starts on an acoustic guitar, I’ve written all of my songs on this one guitar. I definitely have a hard time with time. When we record and a song turns out to be 7 or 8 minutes long I’m always thinking “holy shit, I didn’t realize this song was so long.” Maybe I need to be a little better at editing but I really like playing loud electric songs with my band.

TK: I can’t help but think of Neil Young and Crazy and Dinosaur Jr. when listening to both American Radiance and your latest album, A Life of Trouble. What is your favorite album by those artists?

KE: We have gotten both those comparisons a lot, I think Polizze was the first to make it. I have to say I love both those bands and I always have, I just don’t really hear it but I will take the compliment anytime, I think it’s a kind one. As for favorite albums: Neil Young and Crazy Horse, I love it all but I’ll pick Rust Never Sleeps. Dinosaur Jr.: Where You Been.

TK: What were some of your other influences for A Life of Trouble…musical and otherwise?

KE: When It comes to this album I think my influences come a lot from bands like Wilco and Tom Petty and The Heartbreakers. It always depends on what I’m listening to the most at the time. Lyrically, I would say my influences are Beck, Elliott Smith and Townes Van Zandt. Also I get really inspired by reading so that helps to. These last few Purling Hiss tours I read a lot of Henry Miller and John Fante.

TK: Are there any plans to perform live for the new album?

KE: Right now we are looking for a new drummer. After we recorded the new album our drummer Stephen decided he didn’t want to play drums anymore.

TK: Kiel, how does the live performance differ for you being out in front of the stage on vocals/guitar then your role in Purling Hiss’ live show?

KE: When it comes to playing live in Purling Hiss, there is no stress for me, I just go out and play. It’s great. When I am singing and playing guitar it’s my favorite thing in the world, it just feels natural.

TK: What is your favorite venue to play in the city?

KE: I’ve gotten the chance to play a lot of venues in the past two years but I’m always excited to play Johnny Brenda’s. The people there are the best, they really know how to run a venue.

TK:  What do you guys do when you aren’t playing music?

KE: I don’t really know how to answer this question, I pretty much stare at the wall until it’s time to play more music…. also i like to read.

TK: Are there any future plans for Tin Horses? Live shows, tours, videos, another record?

KE: Until we get a permanent drummer there is no plans for any shows. I have about 7 acoustic songs we are about to start recording, so hopefully that will be done in the next few months.