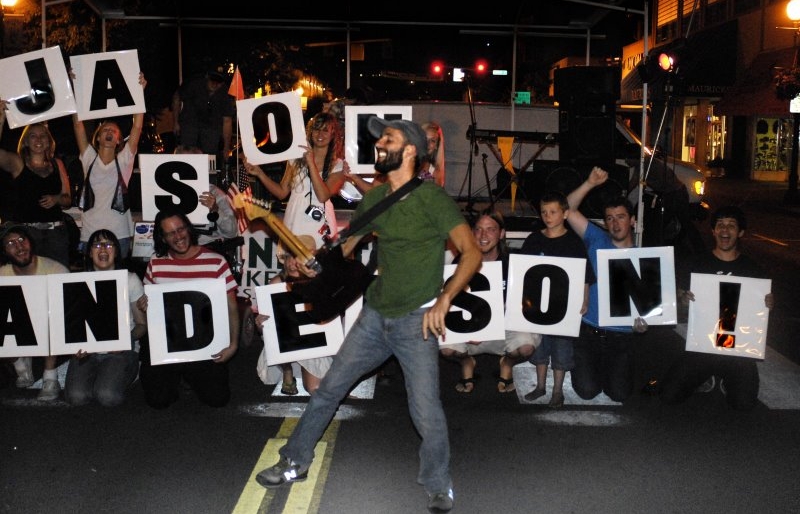 I started listening to Jason Anderson in earnest about three years ago after my buddy and Strand of Oaks mastermind Timothy Showalter strongly encouraged me to revisit Anderson’s previous releases. However, it was not until 2011’s Summer Style that I really began forming a deeper connection with Jason’s music.

On a cursory listening level, Summer Style is an undeniably catchy set of affecting anthems constructed around Anderson’s strong vocals and guitar playing. Dig a little deeper and you enter a world of honest lyricism and energetic writing. You might call it enthusiastic or impassioned, but I call it honesty. Jason hits upon much of what makes up the universality of the human condition and is able to present it in a way that manifests itself with extraordinary intensity, truthfulness, and particular poignancy for often short songs. I sincerely get goosebumps every time.

I knew I needed to work with Jason, so last year we recorded a Folkadelphia Session. So, we’ve has been sitting on this session for a while, since November of 2012 to be more specific. Back then, I knew that Jason Anderson and I were also working on booking a show for this current year, so I figured that we would eventually use the tracks that he recorded at the XPN Studio as fuel to stoke the fire to get folks excited to attend the concert. Fast forward to now and here it is, the latest Folkadelphia Session featuring our man Jason Anderson and the concert we’ve been planning this coming Wednesday, April 3rd at Studio 34 in West Philly.

I hope that you’ll investigate Jason’s music from this session or his albums, and consider coming out to see his performance this week; his shows have been described as life-changing and I anticipate some serious sing-a-longs. Good times for all-ages.

Jason Anderson performs at Studio 34 with Arrah & the Ferns and John Craigie & Leigh Jones this Wednesday, April 3rd at Studio 34. He recorded this session for Folkadelphia on November 14th, 2011 at the XPN Performance Studio.