Unlocked: Restorations and the ever-improving sound of new punk - WXPN 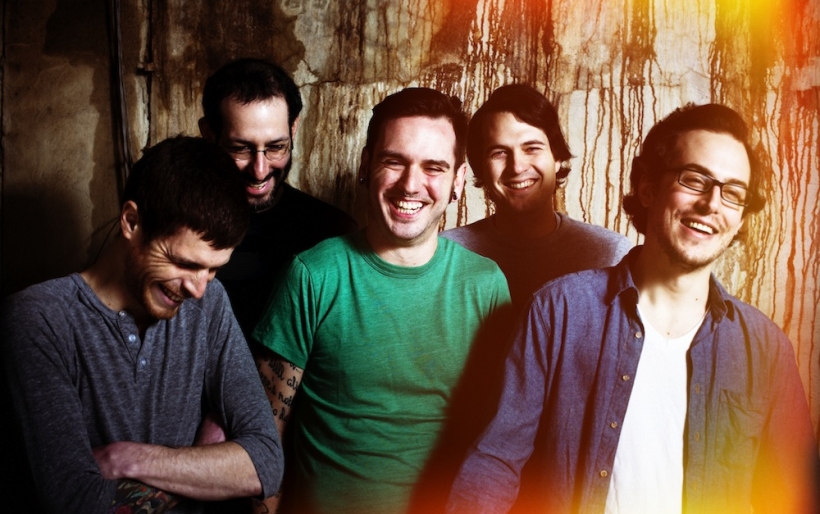 Unlocked: Restorations and the ever-improving sound of new punk

Philly punk outfit Restorations seems to have carved out its own little corner of Fishtown.

Right across from Miner Street Studios, where the band recorded its last three releases, is their warehouse practice space. A series of doors open into cold, dank space, then to a homier environment with a kitchen and sofas. Someone there has jokingly crossed out part of the “Restroom” sign so that it now bears the band’s name. The five-piece squeezes into a tiny, sealed-off room, sometimes also visited or accompanied on a fourth guitar by their producer, Jon Low.

Tonight, songs like “D” and “Let’s Blow Up the Sun” off the band’s newly released LP2 are blaring – seeping through the walls and wafting out on to the adjacent street. Past favorites like “When You’re Older” join the new ones, as do laughs and the spontaneous 30-second launch into a cover of “Slide” by the Goo Goo Dolls.

This little corner of Fishtown is where the fun and the magic happen, but a far journey from where Restorations started with the project in 2008.

“We had all come in as defeated, resigned musicians being like, ‘Who cares, we’ll play for a couple of beers and gas money,” said frontman Jon Loudon, who started the band with guitarist Dave Klyman after the split of their post-hardcore band, Jena Berlin. “That’s all we really wanted. If we recorded, great! Cool! And that was it, we’d have something to do on Thursday nights. That was the M.O. of the band for the longest time.”

In the beginning, it was never the intention for Restorations to be the band they are today — one with an extensive and constantly maturing discography, a new record deal and the ability and opportunity to soon tour the country. They agree that the August announcement of their signing to SideOneDummy Records — home to bands like Anti-Flag and The Gaslight Anthem — was a “we made it” moment for this collection of musicians who had given up on that dream multiple times before.

“We finally just got the job that we wanted,” said drummer Carlin Brown. “So now, it’s actually time to work.”

“I feel really, kind of little kid-ish about it,” added Loudon. “It’s been so surreal, I guess, because I think getting into it, we thought there were going to be a lot of concessions on our end, and things that they would want us to do and a lot of negotiating things. Basically it just boiled down to, ‘Hey, you guys have fun. Let us know if you need any help.’ … They’ve just been really helpful and really nice. Not that we’ve been jerks about it, but they’ve just stayed out of our way in general. They’ve helped us get all of the stuff that we’ve always wanted, more or less, and it’s been all of the right people, all of the right situations.”

The support from the label allowed Restorations to make LP2 in the best way possible – without worry. Logistics aside, the band was able to focus on writing and recording this faster, tighter, more rhythmic and rockin’ LP.

“You would wake up and it was a nice, beautiful day in Philadelphia,” said Brown of the recording experience. “You’d see the sun and you’d walk in and you’d go (sighs), ‘This is everything I want to do, is just drink coffee and play music all day.”

“And I didn’t play percussion in my bedroom,” added Low, referencing his work mixing the band’s first self-titled full-length record. Low added percussion accents to several songs for the band after they ran out pretty much run out of money for more studio time to do it themselves.

Loudon credits Low for LP2’s cleaner, more edited and more purposeful sound. Gone are the days of the band’s less precise, floaty rhythm section and adding feedback or other elements to a recording without reason.

But lyrically, Loudon said he still followed the same process and drew from the same pools of emotional inspiration for LP2.

“I feel like I’m writing the same song every time we make a song,” Loudon said with a laugh. “A lot of the songs are sort of building off of one basic idea, you know, one riff. There’s a certain way that I think we write songs. I’ve tried to sort of, lyrically, have that happen too. So it just sort of tumbles, and everything that is going to happen in the band is already there and it just sort of comes together in different ways as it goes along. … I like the idea of drone and repetition, and just sort of sticking with things. I like that as a theme.”

“There is a story in there somewhere,” added Klyman. “You don’t have to describe the plot, it just sort of happens.”

Songs on LP2 like album opener “D” took just a week for Restorations to write. Others, including “New/Old,” have been more than two years in the making. That track was a cast-off from the band’s first LP that was then revisited, and finally finished, for this record.

“It’s great that people are like, really into it, because that was a song we thought sucked,” Loudon says. “We sort of have a long history of just being like ‘Nope, it’s not going on the record. Then we swat songs down and never release them.”

The meandering, post-rock influenced and half percussion-less “0.014MPH” didn’t make the cut for LP2. Instead of keeping it in the vault, the band released it on a 7-inch record that preceded the full-length.

“We put it out as a B-side thinking some people would appreciate it, and people that give a shit like that, they could have it.” Loudon said.

Criticism for LP2 has been overwhelmingly shadowed by praise since the album was released Tuesday. Kind words any many other factors have helped Restorations build a vote of confidence in their abilities and place in the punk scene. Loudon said some of this is also due to the band’s unconditionally supportive fan base.

“I look at a lot of bands and I feel like their fans are super demanding and entitled and really picky about what the band is doing,” Loudon said. “For us, I feel like we could put out a smooth jazz record and people would be like ‘Hell yea, that’s great, guys. Nice job.’ People don’t get mad at us about stuff. I don’t know why that is with our band, but in general we don’t seem to get that backlash that most bands seem to get. “

No matter what successes or failures the future holds, Restorations has no intention of becoming complacent. The idea of constantly improving is all but ingrained in the band’s namesake.

“I wasn’t even in the band and I said ‘Well, why are you calling it Restorations?’” bassist Dan Zimmerman recalled. “[Loudon said] ‘You know, we’re always try to make improvements, no matter what.’ That was something that stuck with me when I was not even in the band … and it’s still the same concept. No matter what we write, we’re always going, ‘Oh man wait we could do this! Oh hold on, hold on, stop, you do that now.’”

LP2 is the featured album in this edition of Unlocked; hear the spotlighted single “Kind of Comfort” in Monday’s post, read Tuesday’s album review, watch a live chronology of the band in yesterday’s post and check back tomorrow as we travel into the kitchen with drummer Carlin Brown.