An Interview with Johnny Marr (playing the Trocadero on Tuesday, April 30) - WXPN 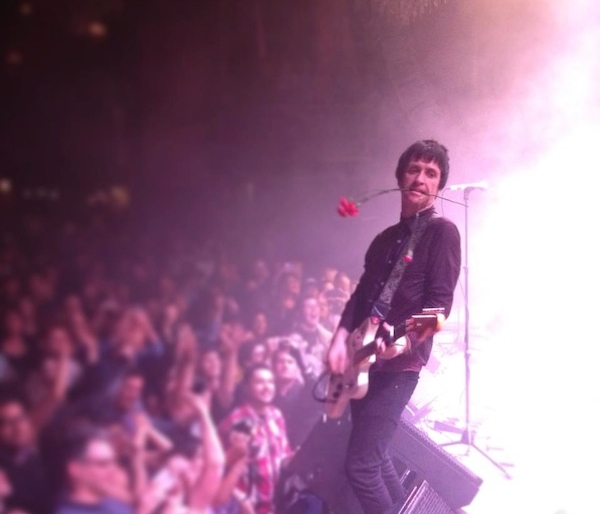 An Interview with Johnny Marr (playing the Trocadero on Tuesday, April 30)

“The best advice I’ve been able to give is that [learning guitar] is a little like swimming. Just dive into it and splash around and be kind of crappy for a few minutes and don’t worry about being too noisy or out of time. You will get there a lot quicker [as opposed to] treating the guitar like an egg. That approach is too fragile, just dive in and be really raucous and rowdy and you will get there a lot quicker.”

That’s Johnny Marr’s advice. Performing next Tuesday, April 30th at the Trocadero, the 49-year-old guitar god is responsible for co-founding the pivotal rock outfit The Smiths, where he shared songwriting duties and played lead guitar. Since the group disbanded in 1987, he’s worked on countless projects with notable artists including the Talking Heads, Modest Mouse, J. Mascis and the Cribs. The “rock god” title is no joke, either. Earlier this year, NME magazine presented him with the “Godlike Genius Award” for his contribution to the world of music, so you should you should pretty much listen to any advice he wants to give you.

Marr played a show the night before our phone conversation at Aladdin Theater in Portland, Oregon, where the Manchester native relocated with his wife and two kids after coming to the Northwest city to work on Modest Mouse’s 2007 album, We Were Dead Before The Ship Even Sank. Today, he’s touring in support of The Messenger, his first full-length solo record in his over 30 year career, which was released this past February. He says an independent project was never part of his bucket list, but he had an idea for a sound and he wanted to “see if it was poetic enough to make into songs.”

It worked. Marr says he’s been able to perform 11 of the 12 songs from the album during live shows, which is “a very good sign. It means the songs are doing what I wanted [them to do] when I wrote them.” The record is a true affirmation of his lifetime of experience, and obviously influenced by his collaborative history.

“I think working with so many different people has, in a way, shown me what it is that I bring to a situation and then I bring the best of it to my own stuff. I have a sense now of why Beck asked me to play with him or what the Talking Heads wanted me to do with them and I kind of employ myself to do that in my own records.”

The Messenger is urgent in form, with strong, polished power chords and a heavy Britpop influence flooding almost every track. His lyrics relay a sincere aching for life back in the UK, which is where he decided to record most of the record. “European Me” is the most obvious tie-in, with a jangly, Smith-like guitar introduction and honest, I-am-who-I-am verses (“Now there is no turning back/ Once gone the traces impact/ Watch out, there’s no changing”). Conversely, there’s a gravelly, Pacific Northwest connection that opens through gravely guitar riffs in “Sun & Moon” and “Word Starts Attack,” fitting throwbacks to his Modest Mouse days.

It’s uncommon that an artist’s career can breach decades (and genres) without becoming stale, forced or phony, but Marr’s evolution has grown organically. He’s able to continually shine through his timeless musical contributions and cultural effect.

“You meet people who are different because of the bands they liked when they were teenagers, they make different life choices,” he says, and I can attest to that. When I first heard The Smiths’ “Asleep,” I was 15-years-old. I spent two weeks trying to go to bed with it playing in my ears but I couldn’t, I was too focused on the song to fall out of consciousness. It was then that I stopped looking for my life in Top 40 radio and started actively exploring music, searching for another four minutes and 11 seconds that could give me that level of self-fulfillment. I found it, coincidentally through some of Marr’s other musical collaborations, including Modest Mouse, Dinosaur Jr. and the Talking Heads. It’s a fact: I wouldn’t be who I am today without alternative music. I certainly wouldn’t be interviewing Johnny Marr right now if it wasn’t for Johnny Marr back then.

Marr can say the same about the iconic musicians he followed as a kid. He learned to play guitar by listening to Sparks’ records and learning the songs, part by part. If there was a long piano introduction to a certain song, he’d play it on guitar until the guitar part came in. By 18, he managed to spawn one of the most influential rock institutions of the century, making music that would inevitably change so many young, introspective lives. Through his own advice, by being “raucous and rowdy,” he got where he was going quickly, and he continues to push his career forward. Just like a great swimmer, he’s never stopped splashing around, wading and creating.

“I totally agree that rock and pop culture can change the world,” he says, “For example, because of a band I was who made a record called “Meat is Murder,” there are more animals alive, and [so] I’m kind of living proof of that.”