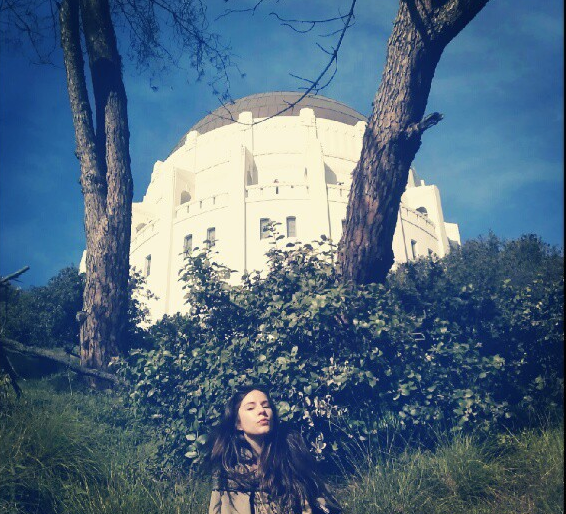 I didn’t set out to write a “walking” review of Bad Braids’Supreme Parallel, but once I started I couldn’t stop finding the, uh, parallels, between the songs and the scenes around me. The second record from local singer-guitarist Megan Biscieglia’s dark art/folk project is a longtime journey of ritualistic storytelling and gypsy-like instrumental concoctions. There is a vein of solitude that runs deeply through the album, making it best experienced alone. For me, it was while walking through my neighborhood on a damp, overcast Monday morning when no one else seemed to be out in the world. Suddenly, my surroundings became foreign and open to interpretation, and my imagination went wild running through the songs on the record.

It hit me during “Clover,” (the third track off of the group’s intimate second record), that I was experiencing some form of serendipity. I passed a church on Hewson street just as a pickup truck drove by with a bed of bright, fresh flower arrangements. A funeral. Cars blocked the street with nobody in them, just tiny orange flags fluttering from their antennas. “Clover” is an eerie outcast of a song. It’s sounds like being a stranger passing a stranger’s funeral. It’s a different kind of lonely, with recurring Braids’ collaborator Paul Christian on organ creating haunting, church-based harmonies.

“Ships” dives deeper into that solitude, suggesting the idea of tiny vessels in the mind that can take you far away. You can embark on your own wild adventures without actually going anywhere. I pass a place called the Penn Home, which is carved out like the White House with red, white and blue flags and ribbons wrapping around every window and a well kept green yard out front, between right and left wings. It’s not until I see a tiny wooden sign on the corner of the building advertising “three meals daily, laundry and housekeeping,” that I realized I let my imagination sail away for awhile, maybe a little too far.

But it’s so easy to do with this record. Each song straddles the line between dream and reality through the introduction of exotic instrumental elements like the lap harp, theremin and the vibraphone. Biscieglia is an expert at vocal transitions, from soft, barely-there whispers to strong, stark serenades, she leads with melodies that are wintery and warm, like a hot, spiced something on a snowy night.

It’s interesting that there are so many instrumental collaborations on Supreme Parallel, considering how individualistic it still ends up sounding. Biscieglia chooses a wide array of choir-like characteristics to display throughout the record, enlisting in the help of a multitude friends including Paul Christian, Jesse Sparhawk and Mike Bruno (of the shamany-sounding Black Magic Family Band).

Most of the musicians Biscieglia selects to help out on this record are longtime contributors to her sound, also aiding in some of her live performances. Still, it’s no secret that her voice is the frontrunner of the project. While her contributors are experts at creating the perfect complimentary construct, even the theremin and wine glasses used in “Palace” can’t upstage her naturally haunting sound.

You can lose yourself in Supreme Parallel without even trying, though I suggest you try it.