When the stage is struck, the chairs are cleared out, and the paintings are down off the walls, Philly performing arts space PhilaMOCA is a very different place than concert crowds, theatregoers or film aficionados might recall. Director of programming Eric Bresler likens it to a blank canvas.

The room was empty like this when I met up with Bresler a month ago. He was getting ready for the inaugural Cinedelphia Film Festival, an eclectic and imaginatively curated showcasing of locally-made and locally-themed cinema that wraps up this weekend. 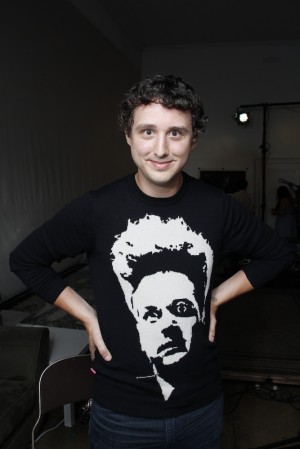 Over the past month, the festival has screened the infamous 1968 documentary High School (filmed at Philly’s Northeast High), reunited the TLA Video crew, screened selections of news footage from Temple University’s Urban Archives and bought together a who’s who of Philly punk players past and present for Joseph Gervasi’s Loud! Fast! Philly!

This afternoon it’s offerings include a screening of 1977’s Rollercoaster in sensurround and the bizarro new wave / sci fi flick Liquid Sky with a live score by Philly’s Cheap Dinosaurs. On Tuesday, Pattern is Movement’s album screening party closes out the month.

The festival is also the culmination of Bresler’s first year as director of programming at PhilaMOCA.

“I came in with the mindset of ‘let’s do a little bit of everything,’ but there has to be a common thread,” he says of his first year. “I love the tagline that we are ‘the center of weird.’ I think that applies to a lot of our events. Sure, we have some classier events, but there’s usually an element of weird, whether it be Naked Girls Reading series or our film-themed burlesques, or the weird movies I program.”

The space has come a long way from its days as a DJ party house – and even before that, as a showroom for cemetery furnishings. (It’s full name: Philadelphia Mausoleum of Contemporary Art. Kinda classy, kinda weird.) Many attendees upon arriving will notice the iconic Mad Decent logo in a cement tile at the doorstep – do a geotag search next time you’re there and see how often it’s Instagrammed. Famed international DJ and producer Diplo used to live here, work here and throw occasional events here with his inner circle – including the original Mad Decent Block Parties.

In September on 2010, after that crew had skipped town, filmmaker and musician Gavin Marshall – the space’s executive director today – moved in with a different vision. At the most basic level, he felt Philly needed an all-ages music room of its size that felt like a proper venue.

“With full props and credit to all of the DIY scene, what I was going for was something different,” Marshall says. “I didn’t want to see the bands I love play in a smokey basement with shitty sound, or some warehouse with bare walls that smelled like puke. That time in my life had passed. As a musician myself, I was out to create a great-sounding venue for both the performers and audience.”

He also saw the potential for more. Art on the walls. Projections on the musicians as they played.

“Much of the building’s appeal is due to the fact that it’s a relatively large space with a high ceiling and no middle support columns to obstruct a projector or audience view,” Marshall explains. “Projections not only light up the musicians, but provide a huge moving backdrop. They add to the fun of the event.”

One of the first events to make a big splash with this approach was the Jesus Returns concert on May 21st, 2011 – the day the world was supposed to end, according to preacher Harold Camping. Hop Along and Netherfriends performed to a packed crowd, backed by footage of various biblical films and TV specials – including (I believe) Franco Zeffirelli’s Jesus of Nazareth.

From here, full on film screenings were not far behind, and when Bresler came on in April of 2012, he worked that into the space’s repertoire. His background in the city’s film scene is extensive, from premiering his anime documentary Otaku Unite at the 2003 Philadelphia Film Festival, to gigs at TLA and the Philadelphia Film Society, founding the Cinedelphia blog and beginning to host Cinedelphia screenings around the city.

The weekly PhilaMOCA fundraiser Tuesday Tune-Out is an innovative idea he brought to the space – it uses music as a catalyst for exploring film by asking bands to screen their favorite films, and it spans different cultural scenes in Philly via different monthly curators. In addition, film screenings feature regularly on the venue’s calendar – as well as events in a variety of other disciplines.

Music is still a regular feature on the calendar – sometimes through promoters like R5 Productions, sometimes through independent booking agents like Andy Molholt of Laser Background and Norwegian Arms. Molholt booked many early shows before Bresler joined the venue, and continues staging concerts there today – Bresler calls him a trusted source when it comes to the Philly music scene.

“Pretty much everything about the running of the space leveled up,” Molholt says of the past year. “The website looks really professional, Eric is great at marketing the events. Since I was involved before he came on, I wasn’t sure what to think – like who is Gavin going to hire, you know? But when Eric started, our views aligned in a lot of ways about how things should be and what kind of programing should be there.”

He says the venue’s growth is analogous to New York space Glasslands, which started with Death By Audio and 285 Kent as more scuzzy and underground, but grew into so something more reigned-in. “The last time Norwegian Arms played, the show got written up in the New Yorker,” Molholt says. “That’s crazy!”

He also observes that the current production crew have started bringing in interns and part-time help from the DIY house show scene – folks who book at places like Maggot House and Pi Lam.

“Its a good introduction for them into the world of professional promoting, bridging the DIY world and a legit venue,” he says. “And some might fault PhilaMOCA for that, but I think if you’re good enough to become a proper venue, you should.”

Marshall says he could not be happier with that growth.

“It has always been my intention to let the space grow organically within the community, and be open to all forms of art and culture,” he says. “There’s an endless amount of variety in music, performance art, film and comedy, and we’re open to anything. We have no rules.”

For Bresler, it’s all been leading up to the festival, and he says “I would love to see it become an annual thing.”