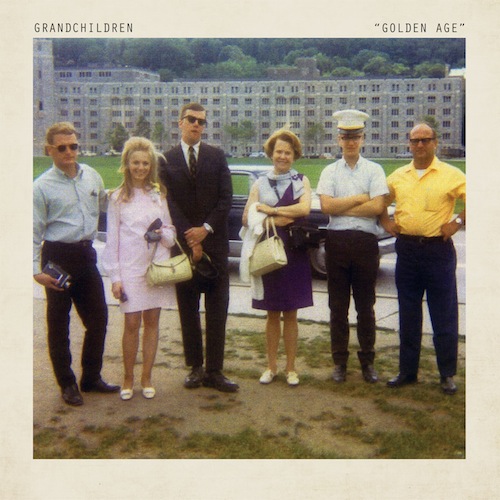 Much like a track runner, Granchildren see the benefit of getting off the block with the burst of energy that will maintain you through the finish line.  Momentum is key to Golden Age, the new album by Grandchildren, out May 7th on Ernest Jenning. The album is big in scope and big in sound, though not maximalist. The album explores quite a few variations of their orchestral pop, while being a more cohesive compared to the band’s debut album Everlasting . For example, the percussion is brought to the forefront on the album and is constantly apparent – though never overwhelming – and never close to being redundant.

Awaking the album is the pulsing and humming “Sunrise,” with it’s tribal percussion, distant keys and ascending vibraphone. From the start you can hear the complexity of the arrangements, which flow into each other like bodies of water meeting and growing as an ocean. Without slowing down much the album progresses to the dreamy title track “Golden Age” and then into one of the standout tracks, “End Times.”

As you reach the middle of the album it opens up into a different kind of album where, instead of combining all the ‘essential’ parts of Grandchildren, like they did to begin the album, they explore the various directions their arrangements can go. This begins with the jumpy, precautionary track “No Way Out” which is highlighted by an idiosyncratic clapping part, otherworldly falsetto and wandering horns.  The atmosphere completely shifts for the next song to a gentle, calming surrounding, with something magical in the air. The light strumming, distant drums and lead singer Aleks Martray’s soft, and comforting voice all compliment each other in the beautiful song. Rounding out the middle of the album is the cinematic “Into Gold” which blooms in front of you, and does so elegantly.

The back of the album is less easier to define musically. “You Never Know” is one of the most restrained moments of the album. It shows the band’s musical chops, but does so in a different light.  On this album there are various moments where the songs can go in different directions, either going big or pulling back on the reins.  This album succeeds because, despite their large size and ability to go bigger, they choose to restrain compositions as a way to let them breathe.  The band, on their previous album, were working on defining their sound. Equally important to a band having a sound, though, is having a “voice” and a “vision.” On Golden Era, Grandchildren continue to evolve and mature their sound, while finding focus in their songwriting, arrangements, and studio performances.