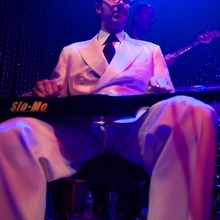 As far as Philly Local musicians go, Mike “Slo-Mo” Brenner needs no introduction. But we’ll introduce the guy anyway. A versatile guitarist whose career has spanned folk to raga to slide guitar blues, he’s been a player in town for close to twenty years. In the 90s, he was in the breakout roots ensemble The Low Road; he also collaborated with Marah, took part in genre-spanning collaborations with DJs in the early 00s, and embarked on a hip-hop project with Mic Wrecka (playing XPoNential Festival and other XPN events). Most recently, Slo-Mo traveled to India to study slide guitar with teacher Debashish Bhattacharya. He’s the featured artist in this week’s edition of the WXPN Philly Local Busker’s Series at The Porch at 30th Street Station, and will play outdoors tomorrow from noon to 1 p.m. (indoors in case of rain). Below, watch a video documentary of Slo-Mo’s travels to India.