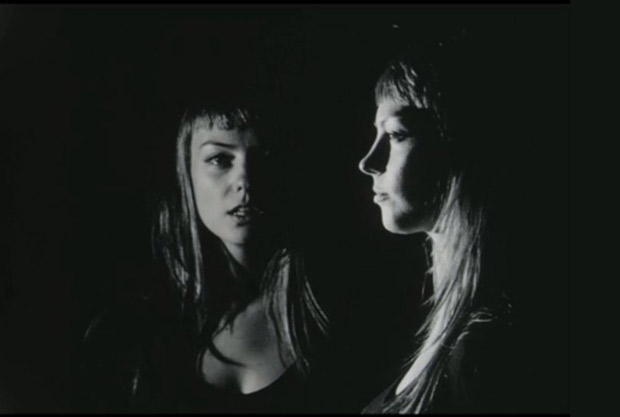 Angel Olsen, the Chicago-based singer-songwriter, released a gorgeous and haunted and joyous album last year titled Half Way Home (Bathetic). And when she was in Philly last winter, she stopped by the WXPN studio to record a Folkadelphia Session, where she performed three songs from it. One of them was an extended version of “Lonely Universe,” where Olsen tries to make sense of a tragic world where the source of life has just died. It’ll bring you to your knees, and then lift you back up on your feet. “You won’t always be walking the safest streets,” she sings. “But you can find your way home.”

Olsen has since signed with the Jagjaguwar label. A release date for her upcoming album has not yet been announced. But, she says, “I’m working on some new things. I don’t want to force them, though. I have some vague idea of when I might record, but we’ll see. It will be sooner than later because I don’t want to wait too long. It has to come naturally.”

In the meantime, you can catch Olsen live in Philadelphia as she performs an opening set for Kurt Vile on May 18 at Union Transfer. We recently caught up with Olsen while she was touring the West Coast, and we spoke to her about television shows, books, painters, movies, and some other stuff. Here’s what she said.

Angel Olsen: Not much. I just played Phoenix. It was really fun. Now we’re in Tempe, Arizona. We’re looking for a swimming hole. We’re going to a place called Kenyon Lake. And now I’m drinking some coffee. I just woke up like 30 minutes ago, so I feel like I’m going to be very experimental with answering these questions.

TK: Good. It’s Friday, and everyone’s over everything. So I won’t ask you all the dumb questions interviewers usually ask like, “How did you get the name Angel Olsen?” I’ll just ask you some random questions like this one: Do you watch television?

AO: Not really. But I got really into Downton Abbey over the winter. Me and my friends did. It was pretty ridiculous. I don’t know what’s so good about it—I couldn’t tell you. I’ve never been a television person, but I watched a lot of that. And I always go back to Freaks & Geeks. Every episode is so perfect. But I only really watch television in the winter because there’s nothing to do in Chicago and I get tired of going out and forcing myself to do things. But, in the summer, I’m normally out riding my bike, or getting some tacos, or running around outside. You know, living.

TK: Are you saying that watching television is not living?

AO: It’s living, it’s just, yeah. It can suck you in and make you emotional about things that have nothing to do with your life when you should be emotional about living your own life. I don’t know. It’s like when you start watching something and you get really into it, and you have to sit there and watch the whole thing. I don’t want to do that. I don’t want that to happen in my own life. But it does sometimes.

TK: Have you seen any good movies recently?

AO: I saw Rust And Bone. It’s about a woman who is a whale trainer, and she loves to go dancing: she loves to go to the club. And the other main character is really into boxing, and he has a son that he doesn’t take care of, but then he has to. It’s hard to feel empathy for either character in the beginning. There are some really intense plot twists. She eventually loses her legs. They become good friends. I won’t say anymore, but it was amazing.

TK: You almost spoiled it.

AO: Almost, but I didn’t. There’s more, Elliott. You have to watch the whole movie. You still don’t know what happens.

TK: I’ll put it in my queue. Do you like books?

AO: Yeah. Do you know António Lobo Antunes? I went to the bookstore the other day to find one of his book. I’m really into Carlos Ruiz Zafon, too. He writes a lot about love and incest and murder and war. I just finished one of his books called The Prisoner of Heaven. The title is kind of whack, but it was awesome.

TK: “Whack.” Wow. I haven’t heard that word used in a while. Do you have a favorite book that you go back to and reread?

AO: There was this one Paul Auster book that I got really into once. But now I can’t remember the name of it.

TK: I’ve read a lot of his stuff. What’s it about?

AO: It’s about a professor whose family dies in a plane crash…

TK: That sounds like The Book Of Illusions. That’s a good one.

AO: I love that book. He becomes obsessed with some Charlie Chaplin character that disappears in the 1930s, and then he gets a strange letter in the mail, and his life changes. I tried to get more people to read it. The first time I read it, I was like 18 or 19, and I loved it. I really like Paul Auster. He’s hit or miss, but I love his books. I read them even if they are shit and they go nowhere.

TK: I went to a Paul Auster reading at the library here in Philadelphia a few months ago and he signed one of my books. He was a nice guy. When I walked over he said, “Hello, young man.”

AO: Oh, really? He has a really interesting face. He seems like a character in one of his books.

TK: Sometimes he is a character in his books. It seemed like we could’ve been good friends if we’d had more time together.

AO: Maybe he could put you in one of his books.

TK: That would be nice. Do you do any writing outside of songwriting?

AO: I like to write postcards and letters. I love writing letters to friends. I don’t know if I’m good at it, but I enjoy doing it when I have the time. I send letters to close friends who’ve moved away, and other people I don’t see very often.

TK: Interestingly, Paul Auster’s new book is a collection of correspondence between him and a friend.

AO: That’s amazing. I should go through all my old email and check that shit out. There’s probably some good stuff in there. And probably some dumb stuff, too.

TK: Do you write fiction?

AO: Not really, but I’d like to. I’d like to spend more time on it, but I end up getting frustrated. I like trying to write dialogue.

TK: Do you do any other creative stuff that’s not music?

AO: I like making lo-fi music videos. That’s fun. I don’t have fancy equipment, but I’ve been doing stuff like that recently. I have a lot of friends that make noise and experimental music, so I’ve made some videos for them. I used to make that kind of music, too, but I don’t really anymore. Maybe I will in the future. I used to play accordion, and drone it out. It sounded totally crazy. I love hearing that music and being around it.

TK: Are you into visual art?

AO: I was actually just talking about this artist the other day named Remedios Varo. She’s a woman from Spain who moved to Mexico and joined the Surrealist movement, but not in that order. I really got into her work.

TK: Do you paint?

AO: I have, but the paintings look so dumb. If someone sits in a room, and I spend hours working on it, it’s pretty good. But I can’t draw or paint from memory. I did some paintings of women, because I feel like I know the anatomy of women pretty well. But really boring stuff, like people’s faces. Nothing too experimental, really. Maybe in the future you’ll see some Angel Olsen art.