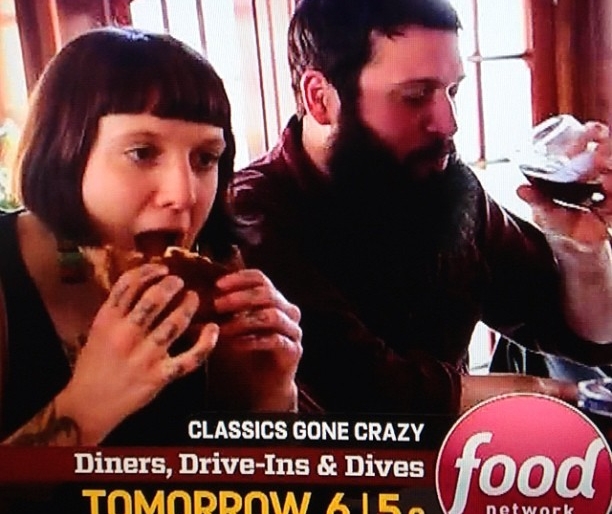 The above image that appeared on Arrah and the Ferns‘ Instagram yesterday afternoon prompted a barrage of questions in my brain. Why is singer-guitarist Arrah Fisher eating a sandwich on The Food Network? What kind of sandwich is it? (It looks tasty.) And what restaurant is this?

Swapping Facebook messages with Fisher, I got answers to two out of these three questions this afternoon. The sunny eatery where we see her (and boyfriend Scotty) is the South Philly Taproom, one of two places where Fisher bartends and waits tables when she’s not rocking stages. (Fun fact: the other place is SPTR’s sister gastropub, American Sardine Bar, and holy cow their patty melts are delicious.)

The restaurant / watering hole will be featured in a new episode of The Food Network’s Diners, Drive-Ins and Dives tonight at 10 p.m. Fisher says she was not personally interviewed for the episode, but she was present for the cameras, meaning there’s a cameo or two. You can check it out tonight at 10 from the comfort of your own home, or from South Philly Taproom itself, where a screening party will be hosted. There’s even talk of free head cheese tacos and other surprises, but you’ll have to attend to find out for yourself. The Taproom is located at 1509 Mifflin Street, a short walk from the Tasker-Morris stop on the Broad Street Line.