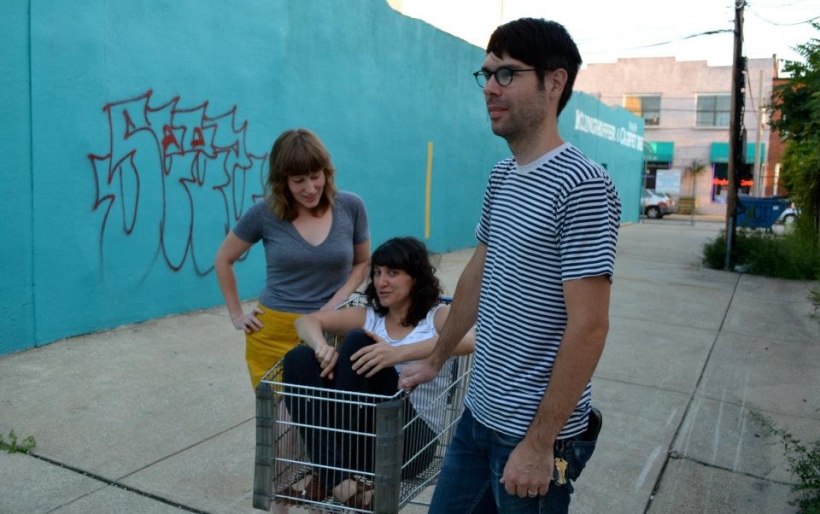 Breaking a nearly year-long silence, riot grrrl-inspired Philly three-piece Break It Up announced today that its long awaited self-titled debut LP will be released digitally and on CD on June 4th with a vinyl pressing in the long-range plan. The band has been working on the record for the better part of the past year; they recorded in a quick three-week run with Jeff Zeigler at Uniform Recording back in late summer, while post-production with Dave Downham at Gradwell House commenced through the fall and into the spring.

I caught up with singer-guitarist Jen Sperling over email, and she tells me that the eleven-track album will feature some familiar material from the band’s live setlist, and some brand new cuts. She explains that taking it into a studio world allowed them to dig into each song’s sonic possibilities, “things like layered vocal harmonies, feedback, and other subtle production effects.” Sperling says the result is simultaneously more pop and more grit.

“I think that we’ve been able to further evolve what is an obvious nostalgia for a previous era of bands in our songs, into something more thoroughly modern,” she says.

You can hear that in the first single, “New Penzance.” It builds on the punchy, melodic approach of the band’s earlier singles (see also: “Excavate,” and “Paint the Town“), and crafts a striking contract between snappy pop sensibilities and a fuzzy punk rock drive. Tomorrow, the band makes its first appearance since last summer, sneaking onto a bill at Ortlieb’s Lounge that also features Heyward Howkins and Taggart.

Sperling says she is excited for her return to the stage. “We are definitely ready.  We all really love performing, and are eager to present the songs to an audience in that format again.”

“Some of these songs might well be considered ‘old’ at this point,” Sperling continues, “But playing live always breathes new life into them.  Anything can happen when you’re interacting with an audience, and that sense of unknown, that energy and mystery, is something we’ve all really missed.”

Below, watch a trailer video of Break It Up in the studio with Zeigler, and listen to a stream of “New Penzance.”After the jump, check out the tracklist of the album.