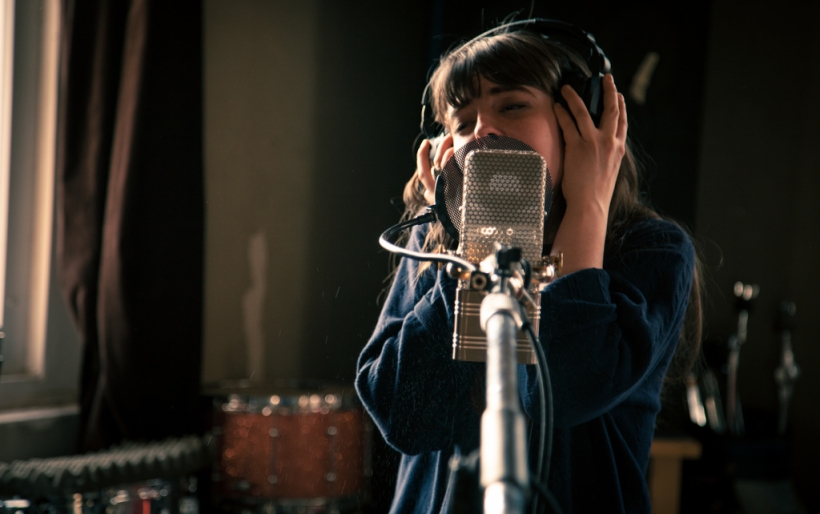 Earlier today, the folks at Weathervane Music debuted the latest installment in their Shaking Through series – a gritty, poppy number from Philly’s Hop Along called “Sister Cities.” The song is loosely based on Günter Grass’ book The Tin Drum, it was written this winter and recorded over the course of 24 hours at Fishtown’s Miner Street Studios. This is something of a change of pace for Hop Along – frontwoman Frances Quinlan is an admitted perfectionist, and their excellent 2012 LP Get Disowned was the result of two years of hard work at Headroom Studios. What was it like going into a situation where they had to finish the song in a day? How did “Sister Cities” grow from its solo beginnings we heard at Quinlan’s PhilaMOCA show in January to the rager we hear today? And will this experience change how Hop Along works in the studio? I caught up with Quinlan at Johnny Brenda’s last week to find the answers to these questions and more.

The Key: How would you say songs, this one in particular, change between when you first write and when you have a finished / recorded project?

Frances Quinlan: This was really different from songs I’ve worked out in the past; it’s been a while since I’ve really felt like I had to beat the shit out of a song. I remember reading this interview with Tom Waits and he was talking about how some songs come to you in a dream and some songs are like a dance. And some songs you have to drag kicking and screaming and, like, fight with them. I really felt like this song was a fight. I remember we were jamming it a while back and everyone was like, “yeah, you know, this is cool.” But we really did not have strong feelings about it until we got in the studio and hashed it out. The structure was the same, but the feeling of it changed in the studio.

TK: So when you say, “when we got in the studio” do you mean you got to Miner Street and didn’t know that was song you were going to record?

FQ: No, we knew. We had no other song that I really felt confident enough to say, “oh sure we could make this work in a day”. This one started out as a very straight song. I thought it was mellow! To me it was like a uniform feeling all the way through, but it was steady and I was like, “that’s what we have, this is what we can work with, we can do something and it won’t be terrible”…you know? But no, we got in there and it was like 75 percent, 80 percent done. It needed some character to it. But that’s why you take that shit to a studio and figure it out! [laughs]

TK: Getting it to that 75 percent, is that just stuff you worked out with Mark [Quinlan, drummer], Tyler [Long, bassist] and Joe [Reinhart, guitarist]?

FQ: Yeah, basically by playing it again and again and again. And really, a major thing was just the way I’d been singing it for so long. When that changed, for me it was a pivotal change for the song. And also the parts that Joe wrote and Peter [Helmis, keyboard player] wrote. When we practice, it’s hard to hear everybody; it sounds a little bit chaotic.

TK: And then the extra character that the song picks up in the studio setting…does that just come from being that environment and knowing that you’re committing it to a recording?

FQ: I think it’s just having a good producer, and I think Brian and Jon did a great job. I was working with people I felt comfortable with, with whose opinions I felt comfortable hearing. I mean, I’m still difficult as ever…I still went downstairs and I was like, “I don’t know, I don’t know.” But I always do that! But Brian was really great, because Brian’s a vocal guy. He really cares. For a lot of people the most exciting part is the guitar or the drums or just the instruments rather than the lyrics or the vocal takes. And I think with Brian, he’s like me, he really cares. He was like “Alright that’s good. Let’s take another pass.” It’s like “thank you!”, because most people are like, “alright that’s good, let’s stop” when I don’t feel good about a take. In the studio, there needs to be a leader. I’m not a very good leader. I’m not good at saying, “Listen, let me tell you why this is the take we need to use of yours,” you know? But luckily, Mark and Tyler are confident enough to be like, “that was my best.” I feel like I need somebody to be there to be like, “Frances, they’re getting worse” or “Frances this is a really good one.” But even then I’m still like, “you don’t know, I know!” [laughs] But there’s times when I’m like “listen we haven’t gotten there yet, I can do it, just give me a few more tries.” It’s hard, because sometimes you don’t even realize when you’ve done your best take. You really don’t. And that happens even with great producers.

FQ: It’s like the antithesis of that? [laughs] Well, I think every record should be different, I think every recording experience should be different. I’m glad we didn’t do Get Disowned in a day, because we weren’t ready, we did not go in ready. But it’s not like we walked in and they said, “surprise you’ve got a day.” We knew the whole time, so we practiced the shit outta that song, and we still knew that there were pieces of it missing. But that’s what they want. They didn’t want us to come in with like an 100 percent “alright let’s lay it down” and that’s it. You know, we had a lot of room to do some cool experimental stuff, and try different methods and that’s what they wanted and that’s what I wanted to. And, God, if Joe told us, “alright, you have a day to record every song for Get Disowned” I’m sure we would’ve approached it a lot differently, but I’m glad we did that the way we did it, I mean, it was very honest to that time. And for the next record, I wanna approach that differently. I probably wouldn’t say, a song a day, cause there’s just so many…we had five players. I can’t believe we did it in a day. But it worked out, and, I love how it came out. I think Shaking Through is a really cool thing and I love seeing the process. You know, like I’m totally into process and stuff like that. And that was fun man, that was a fun two days. And they had good coffee; it was such a blast! But again, every time you record something, you’re in a different space you’re not the same person you were from the last record you made, right? So the experience should change, so I’m really grateful to know now that we can do it. We could, with the right people and resources, we could record a song in a day and be proud of it. That’s very exciting. I’m glad to know that we don’t have to spend two years on the next record. [laughs]

Shaking Through: Hop Along from Weathervane Music on Vimeo.

TK: When you said that it was five players, you mean Joe and Peter were there too?

FQ: And the three of us? Yeah. And dude, everybody made it, everybody changed that song. The second I finished my vocal take, I did not feel strongly about it at the time and I was kinda like, “huh, I don’t know,” cause I had just changed it. The version that everyone is gonna hear is, I had changed how I’d been singing that song for months into that version and I had kinda just figured it out. And so we kept one of the early takes and I felt so unsure about it and then Joe went in a laid down his guitar and it was fucking phenomenal and it changed the whole song. And then Peter put his keyboard down and that changed the song even further. And I’m like, “thank God you guys are here” It’s awesome to know that we’re a five piece and that every piece is fundamental to that song, you know? Nothing is wasted. And when you have a day, you can’t waste time being like, “well what if we just, played flute backwards and see if…” I mean, we still did some stuff like that, but it’s easier to be like “look, we don’t have time, let’s keep it.” It’s cool to do a barebones song.

TK: Yeah, it’s like it focuses it a little bit.

FQ: Yeah, and it was exciting to like write a song and have it come out like…I feel like it’s a little Replacements-y. Like, just that great driving pop sound, you know? And I love that. I mean, I never do that. I always write, weirdly-patterned things, you know? And that song…I was really excited to write a straight song.
TK: So what’s in the future for new Hop Along material?

FQ: A lot more writing I need to do. I’ve kinda put a lot of songs at the wayside. And that was one of those things, it’s just the year where I have to beat the shit out of all of my songs.