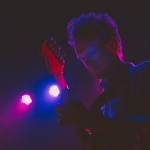 As the digital world slowly overtakes the physical, things like vinyl and CDs are becoming extinct as fewer and fewer people buy physical copies of their music. A long time ago, I decided that I just couldn’t go along with this, that I had to buy physical copies of all the music I owned. But as the years goes by I find myself buying less physical records, and more mp3s.

One of the last records I bought was Father John Misty’s Fear Fun. This is a record worth buying. Not only is it filled with the amazing tongue-in-cheek folk-rock of Father John Misty (aka Josh Tillman, aka J. Tillman) but it also comes in a beautiful package. The album cover is a work of art, there are interesting quotes inside the case, and the liner notes are a giant trippy story written by Tillman himself. In the case of Fear Fun, having the physical album serves to shape an entirely different experience from the recorded music alone. And that’s exactly how a Father John Misty concert works as well.

As Union Transfer slowly filled up for the first show on a new tour for Fear Fun, Pure Bathing Culture squeezed onto center stage to play its own brand of dream-pop. After beginning to a lukewarm audience, Pure Bathing Culture soon gathered their attention and received big applause as they left the stage. But that’s when the real show started.

Before the band even took the stage, a huge backdrop was hoisted up, featuring a naked Josh Tillman leaning on a golden gate, a Marlboro birthday cake, a rainbow on fire and many more ridiculous images. In addition, two giant disco balls where brought to either side of the stage.

After creating this huge set, the backing band took stage and began the album opener, “Fun Times in Babylon” as Tillman pranced on stage to join them. Wearing a tucked in white shirt, slacks and worn-out dress shoes, Tillman danced and sang until ten seconds before the song ended, pausing to banter with the crowd for a good two minutes before singing the last line of the song.

Each song received more applause than the next, crowd favorites being, “I’m Writing A Novel,” to which Tillman added an entire extra verse at the end, and his closer, “Hollywood Forever Cemetery” during which the band really cranked up their instruments, ending the song in a cacophonous blur of lights, sound and running around on stage.

The group returned for an encore featuring a lively cover of the Beatles’ “Happiness is a Warm Gun,” sandwiched in between two brand new songs. The first was so new that Tillman hadn’t yet played it with the band, and did a quiet acoustic version of this quirky love song, telling the audience, “you’re gonna play an instrument and it’s called silence. So just pretend you’re doing a really long silence solo.” The second was his non-album song, “I Love You Honeybear” which he played with the band to roars of approval from the crowd.

And while all of the songs during the hour and a half set were amazing, it was the live presence that really made the show. Every song was changed just a bit, so that the audience was always on the edge of their metaphorical seats waiting to see how a familiar song could be made brand new. In between songs, Tillman continuously brought the crowd to laughter taking about the history of the venue (“I’m gonna turn this old spaghetti station into a train factory”), yelling Benjamin Franklin at concerts, and his younger sister’s high school graduation. At one point he even decided he would turn the concert into a musical, singing his banter in between each song. With the new take on old songs, flashy stage set, dancing and hilarious stage-presence, Father John Misty make live shows well worth it. Father John Misty isn’t just a band; it’s an entire experience that you just don’t get with any other artist these days.