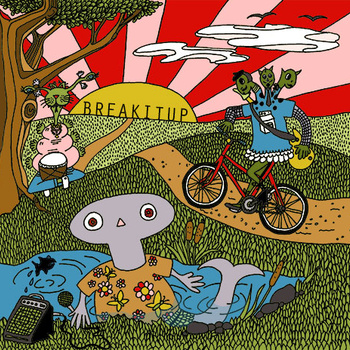 Unlocked: The Key’s review of Break It Up’s self-titled LP

The two songwriters in Philly’s Break it Up always wore their 90s indie roots with pride.

Singer-guitarist Jen Sperling, in her previous band The Fourelles, played a snappy, catchy blend of Riot Grrrl aggression and radio-ready alt-rock – Sleater-Kinney with maybe a touch of Veruca Salt. Meanwhile guitarist (and sometimes singer) Daniel Morse, in his prior group The Wigwams, comes from a more dissonant, mind-bendy art rock world – the stuff of Yo La Tengo and Sonic Youth.

I love all of those bands, which is why it probably took me zero time to decide I like Break It Up as well. But here’s the thing – they’re a good example of musicians not simply parroting their influences as much as they use them to create a new whole.

For the most part, Break it Up’s Break It Up sounds like Break It Up. Even Morse’s spotlight moment “Suzuki” – which, of the batch, is the most overtly drawn from the band’s record collection – has a notable flair thanks to his cathartic delivery railing against numbing prefab homes and suburban sprawl. It might remind you of Thurston Moore circa Sonic Youth’s DGC era, but he makes it his own.

Elsewhere, Sperling has her own go at reminding us what she might be have listening to – there’s a teeny bit of Mika Miko in the angular bop of “Out of Time” – but the rule across the whole of the album is being less overt with the homages and simply writing solid songs. See “Amplify Me,” the single we’re spotlighting all week. It’s got no clever references, no tricks, it’s simply an anthemic rocker about the power of music to make your voice heard – or even to hear your true self among the din of the workaday world. “Just turn it up, turn it up,” Sperling hollers, and it’s tough not to comply.

There’s also the excellent “Excavate,” the strident slice of self-determination and motivation that turned us on to the band in the first place; the irresistibly intertwined guitar lines of “New Penzance” and its tale of childhood dreams clashing with adulthood realities (“run away with me when we grow up / we know everything except where we go / and we can’t go back, so close the window”).

The album nicely balances these poppy moments with more explosive songs like “Subterranian,” an out-the-gate rager where Casey Bell’s drumming goads on frenzied guitar picking by Sperling and Morse into a crescendo of white noise. The brooding “Good Bones,” a live favorite, stands out in the album’s second half too with Bell’s kickdrum pulse and Sperling’s frustrated wail as she vents about aggression and abandonment.

It would be easy to say that songs like this come more from Morse’s hand, while the singalong ditty “Architect” is all Sperling pulling on her tastes. But the best thing about Break It Up is how it’s not that simple. “Excavate” is a gritty, rumbling song despite its positive melody; “Good Bones” is dark, but catchy. On its full-length debut, Break It Up owns up to and pushes beyond its influences, but also blends them, creating a musical world that is simultaneously loud, raw, uplifting and infectious.

Break it Up is the featured album in this edition of Unlocked; hear the spotlighted single “Amplify Me” in yesterday’s post, preorder the album at Bandcamp and check back later in the week for interviews, video and more.