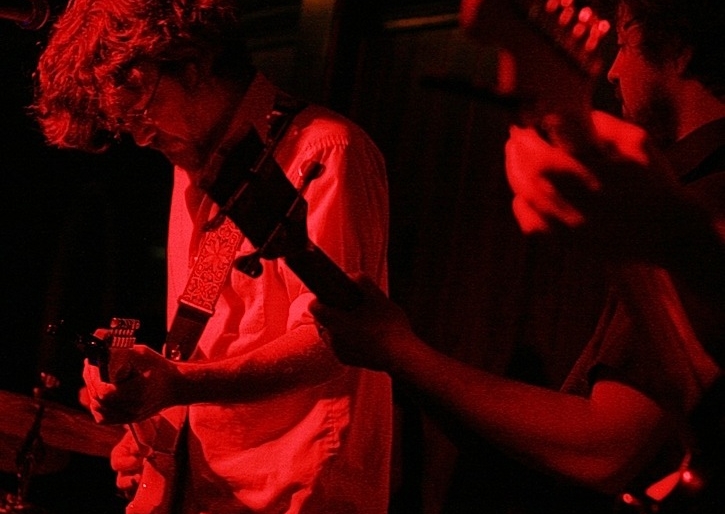 “It’s funny, people still call them solo-guitar records,” Chris Forsyth muses over coffee at Double Shots in Old City. “But there was almost no solo guitar on them.”

The experimental instrumentalist is talking about the LPs he’s released since arriving in Philadelphia back in the late aughts. Dreams (2009), Paranoid Cat (2011) and Kenzo Deluze (2012) all saw him exploring expansive sonic avenues and evocative tones, stretching sound across a generous amount of space – Kenzo clocking in only five songs in 40 minutes. Though the focus is usually the guitar notes coming out of Forsyth’s rumbling amplifier, of course (think of the haunting score Neil Young recorded for Jim Jarmusch’s Dead Man). But that’s not all you’re hearing.

“There would be trumpet, harmonium, percussion, whatever,” he says. “They were pieces I could play solo, but these various instruments were added to them that I would bring in friends to play on.”

This month Forsyth has a group of friends performing live with him – he’s backed by his Solar Motel Band during a residency every Thursday at Ortlieb’s Lounge in Northern Liberties. It’s the first time since his arrival in Philadelphia that the traditionally solitary performer has a full group onstage with him, and they’re looking to be a long-term fixture. Forsyth assembled the band so he could perform the new material from his forthcoming LP – also called Solar Motel, out this October on Paradise of Bachelors Records. But then the band took on a life of its own.

For the forty-year-old Forsyth, this is hardly his first time performing with others. Before he moved to Philly in 2009, he performed in the Brooklyn underground outfit Peeesseye. When that group disbanded in the late thousands, Forsyth felt simultaneously at a loss and liberated.

“I was in a situation where I had this project for so long and all of a sudden I didn’t have it,” he says. “There were always ideas that I couldn’t really bring to that group, that didn’t quite fit, and so that’s when I started playing solo.”

Relocated to Philly, Forsyth was working odd jobs to make ends meet – bartending, private guitar lessons – when a Pew Fellowship in 2011 allowed him to focus on his music. “It happened when my son was around six months old,” he recalls. “Which was a time when I was thinking ‘I don’t know if I can do all this.’ Bartending, trying to do music, being a dad, a husband, et cetera. That gave me the freedom to not have to bartend. And since then, I’ve just been trying to work as hard as possible, getting the music stuff going.”

That included Early Astral, a collaborative LP with Mountains‘ Koen Holtkamp; last year’s Kenzo; and a performance at Kensington Picnic with like-minded six-string explorer Steve Gunn. He still teaches at University of the Arts, and gives outside lessons on occasion, but his focus has been his own body of work which, with the new album, is about push into a realm that could help re-define what people are talking about when they talk about jam rock.

As a collection of songs, Solar Motel is rich and expressionistic – loud at points, gentle at others. Its four pieces start out slight and swell to emphatic heights in a post-rock kind of way. So it’s of a similar mindset as Godspeed You! Black Emperor or Explosions in the Sky, but not as bombastic. Forsyth likens it to the cinematic moments of The Grateful Dead, but “without the cultural trappings of the Dead scene.”

Which is to say – do you love the version of “Dark Star” on Live Dead? Then you’ll love this album.

Forsyth recorded it with a group of players he knew from the New York scene: bassist Peter Kerlin, keyboard player Shawn Hansen (a native of Kansas City) and versitle drummer Mike Pride – a guy who, Forsyth boasts, can span the jazz scene and the dissonant hardcore noise rock scene.

The album was completed last year and squirreled away for later release. This spring Forsyth realized he needed to begin playing the songs live, so he began working with his friend Paul Sukeena of the band Spacin’. Paul suggested drummer Steven Urgo , formerly of War on Drugs. Kerlin came down from New York to round out the group, and practices commenced.

“We got together to play, and the chemistry just really clicked, in a really weird way,” Forsyth says. “I had sent them recordings of the stuff, and there wasn’t really any talking, we just started playing, and all of a sudden, it was there.”

But what, exactly, is this elusive “it”? For Forsyth, it’s a balance between composition and improvisation. He likes songs and tunes, familiar melodies that a listener can latch on to. But he wants to hear something new be created every time the band plays – something different.

“Some of the songs are pretty strictly arranged,” he says. “It’ll be a six or eight minute stretch, where there are maybe some fills that are improvised, but we’re hitting these spots every time, and then it opens up. And there are other songs that are just a couple of phrases, which we know we’re going to return to, but how we get there is a little more open. The structures all change, but they’re always this combination of form and chaos.”

Because the music is so in flux, Forsyth has taken to recording each rehearsal – and each of the performances. After every installment of the Ortlieb’s residency, Forsyth will post the recording to his Soundcloud page and make it available to the public for the week, until the next show is played. This not only gives folks at the show something to revisit, it gives him and his bandmates something to review. When you’re in the moment, he says, you don’t have a picture of the whole – everybody is distracted, or rather hyper-focused on what they’re playing.

“It’s hard to step back and understand what’s going on with the whole band at all times,” he says. “There have definitely been realizations, or greater understandings of what’s going on, upon reviewing the tape, for sure. It contributes to songwriting, too.”

It’s also a good reason to attend more than one of the residency shows. Each one, Forsyth reasons, will be a completely different concert. He says the regular gig has him inspired in two ways – by the jazz history of Ortliebs itself (which continues to its day) and by the proto-punk tradition of the non-jazz residency. “You read about New York in the seventies, and it was like Television and Patti Smith every Thursday, Friday, Saturday and Sunday – two sets a night! – at CBGB’s,” he says. “It wasn’t like here’s your 35 minutes, now get offstage so we can get some more people that might bring in a new crowd. That’s a relatively new club owner strategy.”

And it’s one Forsyth isn’t fond of (“it blows, musically”) since at the 35 minute mark, the band is just getting warmed up, when all of a sudden the show is over.

“ So this is a chance to stretch out a little bit, experiment, but have it be a little bit low stakes,” he says. “It’s not like it’s the only show this month we’re playing in Philadelphia. If something doesn’t go right, we can adjust it for the next set.”

Looking ahead, Forsyth and the Solar Motel Band will hit the road in the late summer / early fall around North Carolina’s Hopscotch Festival, with a possible European tour to follow – and of course some Philadelphia dates in the mix. Forsyth is optimistic.