All photos by Rachel Barrish | raddrhapsodies.com

A lot of people say that rock is dead. There’s no large-and-in-charge band that takes the stage to a packed room. No more crowds of rabid fans waiting to hear Led Zeppelin play their epic songs or Page’s soaring guitar solos. There are no more girls screaming at the sight of The Beatles as they step off their plane. There are no more Pink Floyd laser light shows. Rock bands are still out there, but the rock fan has dwindled and rock has become more of an add-on to other genres. Indie rock, electronic rock, folk-rock, etc. So we’ll never have another truly great rock band.

Or so I thought until I went to see Tame Impala at The Electric Factory last night. The place was packed to the rafters with longhaired spectators waiting to hear the Australian group. The room was electric with energy; the ambience was perfect. Next to me, fans were arguing about which song would be first.

But they’d have to wait to hear Tame Impala, because Light Heat was up first as the openers. A relatively new Philly band, Light Heat came on and rocked the stage with a very full and very loud sound. At times, it was hard to hear their instruments, as the speakers blended everything into one large mass of a chord. But Light Heat brought a powerful energy with them and warmed up the crowd with songs from their self-titled debut that comes out on Tuesday, giving it their all on stage.

After a short break, I got a taste of my first real modern rock band. As Tame Impala took the stage, the audience began screaming. After a quick hello, the band burst into, not a song, but a long psychedelic jam, taking the crowd aback with surprise until the jam somehow morphed into “Solitude is Bliss.” The audience went wild. 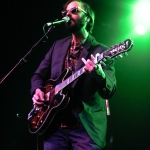 As they played each new song, the crowd danced, sang, cheered and filled the whole room with a smoky haze. All the while, a giant screen behind the band, showed images of undulating strings and blobs of color, which moved to the groove of their music, creating the perfect psychedelic atmosphere.

As the group rounded their fourth song, “Apocalypse Dreams,” they really showed their prowess, stretching out the music into a long and incredibly catchy jam filled with guitar solos and booming drum fills. As it came to a close, the crowd roared louder, only to stop in surprise as they released the band was still going, quietly bringing the volume up until their drummer burst out with a speedy drum solo and right back into “Apocalypse Dreams.” The audience was floored.

In between songs, Kevin Parker would sometimes stop for a brief “hello” or “thank you” to which the audience responded with shrill screams, reaching up their hands to touch the Australian rocker. But Parker’s best line probably came when he said, “this is a song you all can boogie to,” and began chugging his guitar along to “Elephant.”

It’s rare to find a rock band nowadays that use long solos in their music or simply jam on stage, but some of the best moments of the night came not from the groups songs, but from their danceable, free-form instrumentals. After playing “Feels like We’re Only Going Backwards” drummer Julien Barbagallo and keyboardist Dominic Simper started a simple beat and melody which quickly grew into a full band, five minute jam. The same thing happened as the group finished their set with one of their oldest songs, “Half Full Glass of Wine” and Barbagallo really showed his chops. But perhaps the most interesting non-song moment was when Parker turned to the music-sensitive screen and just played random notes and chords in an attempt to make cool shapes. Watching this, I could easily picture him doing the same thing for hours in his Perth house until he finds a sound (or shape) that he likes.

After their final song, the group came back on stage to throw drumsticks and picks into the audience and play an encore: “Nothing That Has Happened So Far Has Been Anything We Could Control” which inevitably stretched out for ten minutes, making their one-song encore into what for most bands would be two or three songs.

Going into the show, I had no clue what to expect, as Tame Impala rarely film their performances. But leaving the venue, it felt like for that brief few hours, I had been transported into the 70s to watch the greatest rock-n-roll show ever performed. Tame Impala are the stuff of legends, a rare breed that’s nearly extinct in music these days. I say let’s put them on an endangered species list, cause this is the type of band we must preserve.

Encore:
Nothing That Has Happened So Far Has Been Anything We Could Control