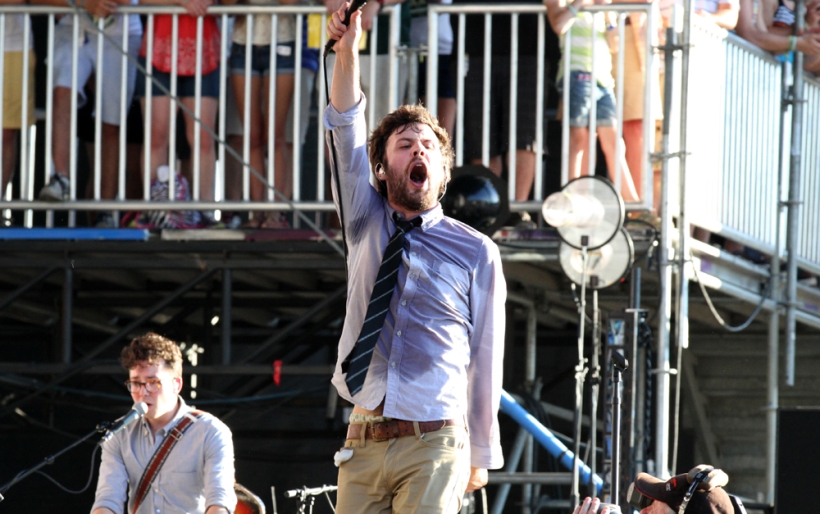 The Firefly Music Festival wrapped up its second year in a giant field off of the Dover International Speedway with some rain, considerably more mud, an army of inflatables and a lot of fun.

Haim‘s poppy, percussion heavy set greeted us as we entered the grounds, followed by LA singer LP early on – she had a bright blue suit, a ukelele, a voice reminiscent of Chrissie Hynde, a stylish 90s alt-pop sound and a great command of the crowd; when the skies opened up for the first time in the afternoon in the middle of her set, folks kept dancing. The second rainstorm happened a little later during Matt and Kim‘s set, but their insanely catchy songs and practically mandatory crowd participation won out over the storm clouds just as handily (check out a video of a balloon / beach ball release here). That said, holy cow those are two ridiculously perky people, and not necessarily in the best way.

Thankfully Kishi Bashi was a nice comedown – the versatile indie violinist (Of Montreal, etc) and sound loop artist created a portable chamber orchestra show on the festival’s backyard stage. He worked through his 151a album and shouted out the fan in the crowd waving a Ron Swanson flag apropos of nothing. Next, California band Trails and Ways played an impressive set of wandering, worldly pop-rock on the festival’s (unfortunately) under-promoted Coffeehouse Stage. Through the woods and across a field, Toro y Moi delighted their crowd with a set of synth-groove disco as the clouds broke and the sun beamed in.

Passion Pit frontman Michael Angelakos bounded on the mainstage with tremendous energy, determined to atone for the band’s cancellation at Firefly 2012 (when, he explained, “I was in the hospital, it was fucked up, I didn’t think I’d ever play a show again”). He grumbled a bit about allergies, then went on to tear across the set, sounding great but maybe overdoing it a bit since his voice blew out near the end. He explained this, and said “I’m really going to need you to sing along on these last few.” Though it initially seemed like gimmick to drum up singalongs, by the ending notes of “Little Secrets,” you could hear his falsetto straining and wheezing. But Angelakos kept pushing it further – poor dude.

Providing the perfect wrap-up before we hit the road, Vampire Weekend played a 90-minute set on the festival’s Lawn Stage, hitting the old favorites (“A-Punk,” “Cousins”), the vibey deep cuts (“Diplomat’s Son,” “Ladies of Cambridge”) and a good portion of the excellent new Modern Vampires of the City (“Everlasting Arms” sounded incredible, “Hannah Hunt” was sweet too). We’re pretty excited for their return to Philly in September. More photos from the festival after the jump, and earlybird preorders for Firefly 2014 (June 20 through June 22) go on sale Wednesday. Inflatables in the crowd | Photo by John Vettese Ron Swanson flag-waver in the audience | Photo by John Vettese