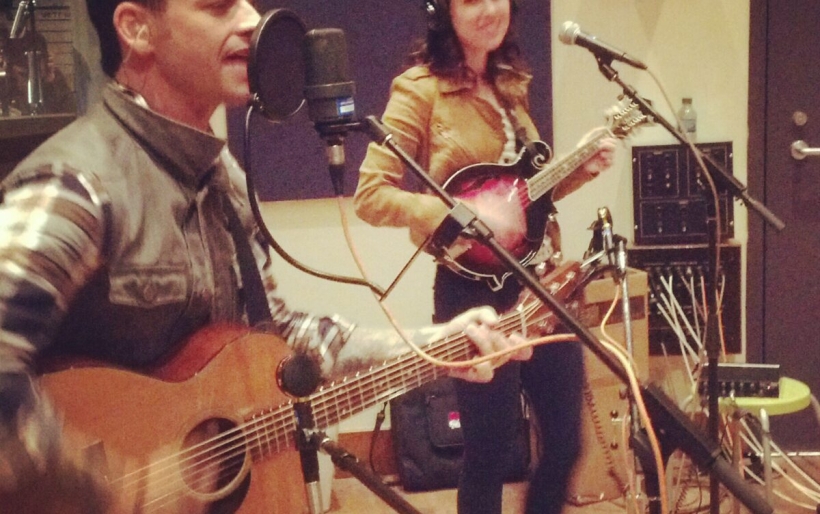 The first show of their first legitimate tour. Well, technically before their first show, and that’s how Twin Forks arrived at the XPN Studio to record their Folkadelphia Session. There was a contagious nervous excitement as the band loaded in their gear, set-up, warmed up, filmed a little check-in video, and snagging a few Instagrams. We talked about the formation of the band, the handful of shows under their belt (they had recently been to South By Southwest), and, of course, the future. When a band is this fresh and new, with so much potential, you can’t help but look forward – it’s all anticipation and adrenaline.

These are characteristics of a new band that is just getting underway; a band plunging headfirst into the world of living on the road and hopefully developing a certain chemistry that will enable them to keep writing quality music for years to come. This type of boundless energy is common for newbies and rare for often jaded vets. That’s why Twin Forks is impressive to behold because while the band is freshly minted, the players are not exactly what you’d call wet behind the ears. Twin Forks lead singer and guitarist Chris Carrabba fronts a little band you might have heard of called Dashboard Confessional (and before that, lesser known, but no less celebrated indie act Further Seems Forever). Dashboard Confessional all but ruled the “heart on sleeve” songwriter field throughout the first decade of the 2000’s and has been insanely influential to so many folks that picked up a guitar, a marble bound notebook, and some raw emotions, whether they’d like to admit it or not.

Carrabba, now joined by members of scene stalwarts the Narrative and Bad Books, has formed what is frequently being called a “supergroup.” I, however, would like to forgo that term which in my mind has certain negative connatations of sluggishness, decadence, even frivolity or egoism. Twin Forks is passionate, giddy, and hungry to share music and bring fans together. At the helm, Carrabba is as exhuberant as ever – he sings, he shouts, he runs, he plays, he’s everywhere at once – and this is just at the studio, where it’s just his bandmates, my two engineers Clark & Eric, and me. Imagine the guy at an actual show.

I love these tracks because they are perfect snapshots of animated live playing. Folks making music and having a great time doing it. Beyond hearing it, you can actually feel the enthusiasm in the room creep down your spine. We’re happy to have bottled that energy here for posterity. Help Twin Forks keep up the passion we witnessed in the studio- download their EP, catch them on tour, and support their efforts. You can start here with our session below.