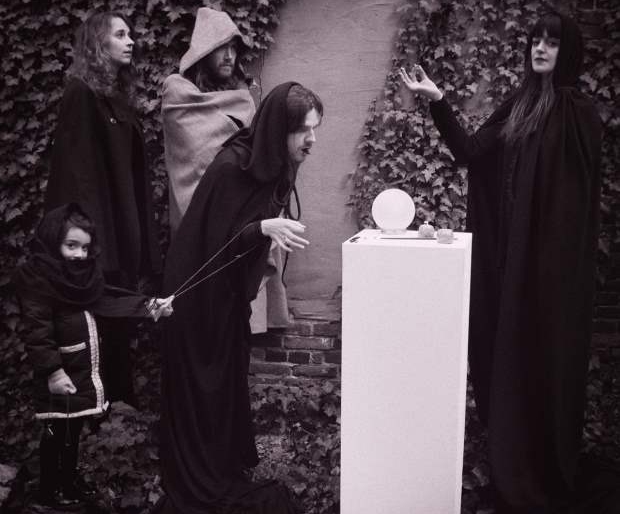 Let’s try a bit of free-association. Loud amplifiers and long hair. Crackling vocals, screaming voices. Blues riffs in B, watch me for the changes, try and keep up. Howlin’ Wolf and John Lee Hooker. The sound of a tom drum, a bari-saxophone, a bass and a cymbal colliding, with a handclap on the downbeat. These are the things that kick “Evil Eye” into motion (okay, I’m not entirely sure it’s in B, I just liked the Back to the Future quote), and with it the debut long player from Philadelphia’s Lantern roars out the tracks.

The band is known around these parts for being hard working and hard touring. They’ve criscrossed the country at least three times since we first heard of them a couple years ago. Their discography, as we mentioned yesterday, is a lengthy assemblage of limited-run, lo-fi, home-recorded singles or three-track EPs. It’s a collection showing the affinity that partners (creative and otherwise) Zachary Devereux Fairbrother and Emily Robb have for blues music, early rock ‘n’ roll, and the lore that goes along with it.

The new Rock ‘n’ Roll Rorschach, out next week on Sophomore Lounge Records, shows what those fasciations sound like when taken out of the basement. With a dramatic increase in production value (and a generous retention of sonic grit), these songs are big, booming, aggressive and unruly. This album is Lantern realizing the potential of its vision.

Bassist / guitarist / vocalist Robb steals the show on the opening with the aforementioned “Evil Eye,” which we shared with you yesterday. But the vibe doesn’t let down from there in the slightest; the song’s blistering pace roars directly into Fairbrother’s vocal entrance on “King of the Jungle.” This one launches with a half-time thumping tempo as a crunchy guitar riff kicks in hard. It dabbles in occult lyrical nods and in guitar machismo (I totally hear some Jon Spencer in the mix). It also doesn’t change out of the verse riff for the refrain or the bridge, which could be monotonous in other hands. But here it works – Fairbrother is a charismatic singer and a skilled guitar player, and he keeps our attention both growling at the mic and tripping out on a guitar solo with wild runs of notes but intense focus.

The title track swings along to a heaping Thorogood-style fuzz as handclaps guide the way; midway through, that sax re-emerges for a sick Muscle Shoals / Motown effect. “She’s A Rebel” simmers things down to a dusky mood and a meditative two-chord change (the reverberating tambourine is a sweet touch), but with Fairbrother’s wandering bass plucking and Robb’s loose and unstructured lead, it shows how much room there is to play with sounds and space, in even the most minimal composition.

“The Conjourer” brings the beat back up with a wild delta shuffle and some emotive harmonica playing; at “Out of our Heads,” we’re back at rock and roll blastoff point. And to wrap the show, “Heart In Your Tongue” is a double-time finale, with a full horn section bleating desperately and Robb harmonizing a Staples-style soul refrain. Eight songs, 32-and-a-half minutes and you’re almost itching to rush back to the start and begin again.

So what have we established, then? Lantern are tremendous players with a ton of energy and a well-curated aesthetic. They’ve got this style down pat, and on this release they don’t mess around in making it sound like a force to be reckoned with. And if there are points where the album feels short on that nebulous concept known as “message” – the band does a respectable job with lyrical cadence and wordplay, but overall it just seems to be saying “let’s go crazy” – that’s okay, because sometimes the message is the music. And what do we get from the music in Rock ‘n’ Roll Rorschach? Let’s free associate again: Catharsis, liberation, nonconformity, exploration, and a love of the roots of American songwriting. Turn it up.

Rock ‘n’ Roll Rorschach is the featured album in this week’s edition of Unlocked. Download “Evil Eye,” the album’s highlighted single, in yesterday’s post, and check back tomorrow for an interview with the band, plus more later in the week.