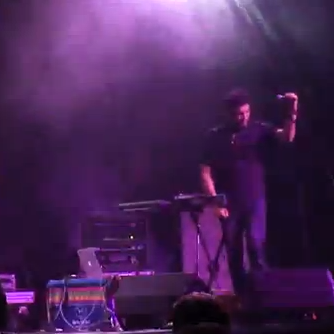 Unlocked: Watch Daughn Gibson and his band play “Kissin’ On the Blacktop” live

One thing you’ll notice straightaway on Daughn Gibson‘s new Me Moan, out this week on Sub Pop Records – it’s very out front. It’s very forceful. It rocks hard in a way that its predecessor, All Hell, did not quite match. Which isn’t to say that All Hell was a lesser album, as much as it had a different agenda – it documented the creative experiments of somebody making music by themselves, without much expectation of ever performing. On Me Moan, Gibson began collaborating for the first time – a result of realizing he wanted to perform his music live, and make his show lively. Joining him in the studio was guitarist Jim Elkington of Chicago acts The Horse’s Ha and The Zincs, and live the duo is further fleshed out by onetime Philadelphian Areif Sless-Kitain (of Aquila Rose, South Congress, and DC / Dischord-affiliated act Regulator Watts) on drums. The band made its live premier at Primavera Sound Festival back in June, playing a set on the Pitchfork Stage. Watch a performance of “Kissin’ on the Blacktop” from that show below.

is Me Moan is the featured album in this edition of Unlocked; hear the spotlighted track “The Sound of Law” in Monday’s post, read yesterday’s album review; and check back later this week for an interview and a exploration of Gibson’s musical past.