A magical night with Belle & Sebastian and Yo La Tengo (review, photos, setlist)

There are plenty of reasons to like a band. They might write catchy melodies, or great lyrics, or boast a really great stage show. None of these are the reason we love Belle & Sebastian, although all of these are certainly true about Belle & Sebastian. No, our love for Belle & Sebastian goes deeper. It’s the way they just seem to get us—the smart, the quirky, the maybe a little dorky, the cynical, the wandering, the artists. It’s the way they seem to effortlessly capture every emotion we’ve ever felt, from gleeful zest to detached nostalgia, while still providing something we can nod along to. They’ve been there for us since we were much younger, and as time has passed and other bands have faded to obscurity, they’ve grown with us, moving from tunes about awkward adolescence and life in the suburbs to the ennui of the workweek and the slow acceptance of always being broke. And last night at the Mann Center, they proved they’ll be sticking around quite a bit longer.

The first thing you notice when Belle & Sebastian take the stage is: there’s a lot of them. Twelve actually, last night, although at one point I swear I counted 13. This includes a string quartet (two violins, two violas), two keyboard players, a trumpet, a drummer, a percussionist, a guitarist, a bassist, and a singer—although everyone traded off so much it was basically a band of multi-instrumentals. And the singer, of course, is Stuart Murdoch, the voice and spirit of Belle & Sebastian, whose banter and dance moves brought the show to life.

The band’s sweeping hour-and-45-minute set drew from their borderline two-decade discography, and included pretty much every song I secretly hoped they’d play (and judging from the shrieks of joy around me, others felt the same). They kicked things off with short instrumental “Judy is a Dick Slap” before transitioning—with glee—to “I’m a Cuckoo,” the crowd dancing and skipping to the zany celebration of weirdness.

As front man, Murdoch was engaged and engaging, regaling the crowd between songs with tidbits about Philadelphia—yarn-bombing the Rocky statue, wild dogs (?) running rampant in Fairmount Park—and bounding and boogying across the stage with seemingly endless energy. During defeated intellect dirge “Lord Anthony,” he donned a wide-brimmed hat, and climbed into the crowd, allowing them to raise him up, deity-like; later during funky jawn “Your Cover’s Blown,” he James Brown-leapt across the stage. And through it all, he maintained an almost superhuman sense of control, never missing a single note, or allowing a hair on his head to fall out of place. It’s part of the magic of Belle & Sebastian.

But if Murdoch is the band’s fearless leader, guitarist Stevie Jackson and multi-instrumentalist Sarah Martin must be his right and left hand—Jackson with a shy, bookish charm, and Martin with a gossamer voice that seemed beamed straight from the heavens. Jackson’s lead vocals on “To Be Myself Completely” felt sincere and refreshing, and when Martin joined in on violin, it felt like a sweet bedroom dance. Later, Martin took up lead on “I Didn’t See it Coming,” and her voice seemed so airy and sonorous that you could have sworn a warm cloud had floated over the lawn.

For the end of their set, Murdoch invited the audience on stage to dance (also tossing out a shout-out to the B&S dance party!), and a dozen or so eager fans bopped along to “The Boy With the Arab Strap” and “Legal Man,” arms and legs flailing as they yelled, “Get out of the city and into the sunshine!” The directive could not have felt more appropriate.

The band closed their set with fan favorite “Judy and the Dream of Horses,” then returned for a short encore of “Dirty Dream Number Two“ and “Get Me Away from Here I’m Dying”—the latter of which is considered (at least by me)  possibly the greatest B&S tune of all, a perfect statement of self-deprecation and purpose, in one catchy melody. “Nobody writes them like they used to, so it might as well be me,” crooned Murdoch. I can’t think of anyone I’d prefer.

Setlist
Judy is a Dick Slap
I’m a Cuckoo
Le Pastie De La Bourgeoisie
My Wandering Days Are Over
I Want the World to Stop
To Be Myself Completely
Lord Anthony
Funny Little Frog
We Are the Sleepyheads
Piazza, New York Catcher
Your Cover’s Blown
I DIdn’t See It Coming
Simple Things
The Boy With the Arab Strap
Legal Man
Judy and the Dream of Horses

Encore:
Dirty Dream Number Two
Get Me Away From Here I’m Dying 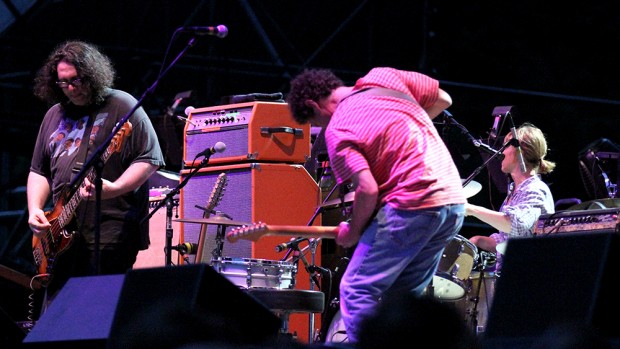 Belle & Sebastian might have closed out the night, but the early part of the evening saw a set from Jersey vets Yo La Tengo, who offered a pretty much perfect mix of slow-burners and garage-y rock numbers, drawn from recent record Fade and earlier releases. Part of the appeal of YLT live is how they can be so indulgent without ever feeling stoner-y—and how each member boasts their own unique stage presence. Ira Kaplan, as guitarist/lead vocalist, is of course the most wily, getting squinty and sensual on “Autumn Sweater,” then freaking out and attacking his guitar on “Ohm”—while his wife/drummer Georgia Hubley maintained an understated grace, crooning so gently on “Before We Run” and imbuing “Ohm”—with its lyrics of “Nothing ever stays the same; nothing remains”—with extra poignancy. And bassist James McNew is the X-factor, mostly standing silent and stoic, but bobbing his head maniacally and pounding out riffs.

The band’s hour-long set ricocheted in style, between low-key “picnic songs” (Kaplan’s words) like “The Point of It” and “Big Day Coming” and dirty garage ragers like “Nothing to Hide”—with drawn-out jammers stuffed in between. Yo La Tengo have been writing tunes and touring for nearly three decades now, yet still every time I see them, I’m blown away all over. They’ve never been the flashiest, or the catchiest, but there’s something about them—a quiet understanding of the power of music to make you feel, and that’s what makes Yo La Tengo so great. 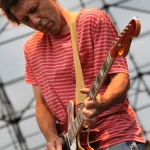