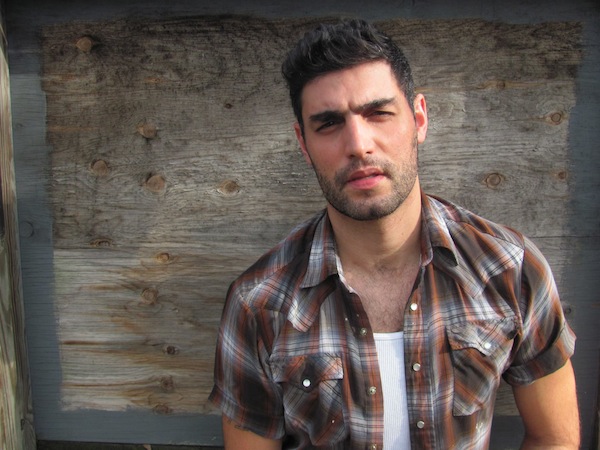 This week, Daughn Gibson released the hard-hitting, unapologetically twangy and uncannily experimental LP Me Moan on Sub Pop Records. The Carlisle, Pa. songwriter – whose roots lie in the prog-metal scene of the aughties – went into the studio with the intention of making the antithesis of a laptop record. He wanted it to pop, he wanted it to come out charging – and he wanted it to be something that would make for a compelling live show. In all those cases, it’s a winner, and chatting with Gibson, it’s quickly evident much thought and sincere appreciation of a wide spectrum of music goes into his work. You can also tell how the 32-year-old Gibson’s approach was shaped by the decade-plus he’s clocked in as a performing musician.

The Key: With solo artists, a lot of times it’s one person doing a little bit of everything. Is that how you’ve operated thus far?

Daughn Gibson: Last year, my first record All Hell came out and I quickly had to figure out how to do something live. I was living in Carlisle, and I was having a hard time finding players, so I had to pretty much do it solo. I built everything in a laptop…I built it like a hip hop record would be built. I figured, well I’m not rapping, I’m just singing over this, so I’ll try it that way and maybe have one person helping me out with piano or guitar. I grew up playing in bands and turning up to 11 and wanting to hear volume…so doing this, I was like ‘Something’s weird. This is not happening for me.’

TK: I feel like as an audience member, sometimes you can see people play to a track on a laptop and put on a good show. But sometimes you wind up with the syndrome of somebody just standing there and staring at the computer. How do you feel in instances like that, as somebody who goes to see music?

DG: I love to dance as much as the next guy, and if there’s a good DJ, my head is firmly in the front-of-house speaker and I’m watching him and thumping along. However, I suppose if someone is making their stuff on the laptop and singing on top of it, I do want to see a little more engagement with what they’re doing, if it’s on the fly or improvised. So, that’s a totally fresh and new idea for me as a performer – to try and figure out how to do that. It’s been a year, so now I can do those things I’ve learned with a band and it now feels great. It feels like it used to, except now there’s bizarre samples and laptop shit going on in the background.

TK: Me Moan definitely feels a lot bigger, a lot bolder as a record. Do you think that was a result of that progression you just described?

DG: Absolutely. When I started writing the record, I set out that I want to do this live, I want it to be loud, and I want it to feel like I’m behind chicken wire. So with just about every song I kept in mind that this is going to get played live, and certainly there were piles of songs that were very easygoing electronic songs…which didn’t make the cut for me.

TK: Tell me about the band you’re playing with, and if they’re the band you recorded with.

DG: As a guitarist, I have Jim Elkington. He’s a brilliant dude who plays in Brokeback and The Horse’s Ha…he came into the studio with a recommendation from someone from Drag City who I used to be in a band with on their label back when I was in Pearls and Brass. So, he came in and laid stuff down and we made stuff up and it was great. I asked him if he wanted to tour with me and he said yes and he recruited his friend Areif Sless-Kitain…he’s playing drums right now and he’s phenomenal. I don’t think I’ve ever been so blessed with players before in my life. These guys are real pros and sweet dudes, so it’s been great.

TK: You mentioned playing in Pearls and Brass, and I think about that a lot when listening to your music. Just because you played in a prog-metal band doesn’t mean that was all you listened to, but even so, the music you made in Pearls and Brass and the music you’re making as a solo artist are very different from one another. How did you come to write your current style of music?

DG: I mean, when we started Pearl and Brass, we weren’t listening to Blue Cheer and Groundhogs – that stuff came later with recommendations. We were basically listening to Skip James, Blind Willie Mitchell, and Robert Johnson, and then trying to do something with it, even though it was a re-invented wheel from 60’s proto-metal bands. For this, it’s kind of a similar process. I’m not referencing Scott Walker and Nick Cave so much as I’m just listening to country music that I like and trying to blow my brains to ribbons with it in my own little room by making it expansive and cinematic. So it’s certainly not similar styles of music but it’s almost the same approach: let’s take something simple and make it weird.

TK: How do you think playing in Pearls and Brass prepared you for what you’re doing today?

DG: As a performer, you always get your sea legs if you’re playing in bands. There’s no performance anxiety, and you get kind of addicted to the whole lifestyle – wanting to play in front of people and wanting to keep making music. I would say that’s the only thing that prepared me, in that ‘well, I have to go on stage and do this thing that I crafted at home.’ Other than that, there’s no easy transition from sitting behind the drums and going into being front and center. It’s a rather terrifying experience, honestly…that, in and of itself, takes a lot of time to get used to and figure out.

TK: Especially because it was a year ago that you started doing solo shows and now playing with the band. It seems that that’s a pretty quick jump versus several years playing in a band.

DG: The only benefit I have is sympathizing with drummers the world over, because they have more or less the hardest job, in terms of just getting sweaty and going deaf. I certainly can get behind there and try stuff out, help out and conduct and arrange, not just from the point of view of the guy singing and performing, but as a musician who is trying to make things come together.

TK: On All Hell, the country vibe was there but it was very subtle, whereas on Me Moan you really embrace the aesthetic. Why do you think you chose to embrace it so strongly this time?

DG: I think it was a natural progression, and it’s also a challenge. I considered staying put, and just delicately balancing the atmospheric, electronic stuff with country music. But I felt that the real fun and challenge would be to go more country; if there was any concept in mind, it was that I wanted to be the terminator in a honky tonk, and maintain that sentence throughout. Because I don’t come from a country background, and I just appreciate and listen, I’m trying to do things in such an informal way. That’s basically what you’re hearing – there is no school for learning how to play country music where I come from. So in that way, it becomes its own thing. I’m kind of the freak in the corner making the thing he doesn’t know how to make.

TK: How has living out in Carlisle shaped you as a songwriter and musician?

DG: In all other ways aside from musically, I think set and setting has a lot to do with how you write, especially how you’re writing words. The day to day things that you absorb in your self-conscious obviously leak into what’s on your pen. I have good friends in Carlisle who are phenomenal musicians, but they just come from a totally different school. The guys I play and jam with in Carlisle – they have no interest, nor could they pull off what I’m doing now, despite the fact that they’re so good. They’re just doing something else, working with funk, Stevie Wonder kind of stuff…they’re real savants. In that way, it is instructive: can you try this lick for me, can you do this, can you give me a couple of notes here? But as an influence or anything I’m going to take to go to the next record, it hasn’t gelled that way yet, but I’m not ruling it out.

Me Moan is the featured album in this edition of Unlocked; hear the spotlighted track “The Sound of Law” in Monday’s post, read Tuesday’s album review, watch a live full-band performance of “Kissin’ On the Blacktop” in yesterday’s post, and check back tomorrow for a exploration of Gibson’s musical past.