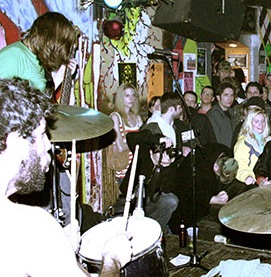 Unlocked: Getting to know Daughn Gibson’s roots in Pearls and Brass

Before Daughn Gibson was Daughn Gibson, he was Josh Martin, a hardworking musician and drummer for the Bethlehem-based prog-metal band Pearls and Brass. From roughly 2001 to 2009, they explored the expanses of bluesy proto-metal riffs and generous runtimes, often having to contend with the “stoner rock” tag but doing so with general good cheer and maximum volume. In our interview yesterday, Gibson discussed how his time in Pearls and Brass shaped him as a solo artist. To close out our Unlocked spotlight on him and his new album Me Moan today, we’ll take a look (and listen) to Daughn Gibson’s formative band.

Me Moan has been the featured album all week on Unlocked. ear the spotlighted single “The Sound of Law” in Monday’s post, read Tuesday’s album review, watch a live video of “Kissin’ on the Blacktop” in Wednesday’s post, read yesterday’s interview with Gibson, and check back in the future for more Unlocked spotlights from The Key.