All photos by Chris Sikich | countfeed.tumblr.com

Bosnian Rainbows made its second Philadelphia visit of the year last night to Underground Arts. Their first trip in February to the First Unitarian Church was a night of glorious, raucous discovery, leaving the crowd in a rock-induced frenzy. And Saturday, less than a month after their masterful self-titled debut album dropped, they picked up where they left off in the dead of the winter, thriving in the heat of the summer with their 1980’s-infused synth rock transfixing the crowd for their hour-long set. Consisting of the rousing, one-of-a-kind lead singer Teri Gender Bender (of Le Butcherettes), guitar elite Omar Rodriguez-Lopez (of The Mars Volta, At the Drive-In), the drumming extraordinaire Deantoni Parks, and synth-master Nicci Kasper, the Bosnian Rainbows are a big gulp of musical fresh air. From Gender Bender’s avian-esque dance moves and willingness to leap into the crowd (she did this twice on Saturday) to the raw energy of Rodriguez-Lopez, who constantly bops around while expertly strumming his guitar, the Bosnian Rainbows are a force of aural power to be reckoned with. Concluding the night with their powerful end song to the album, “Mother, Father, Set Us Free,” Gender Bender sang to the crowd, holding hands with those willing, and taking a leap into the audience. This audience will certainly not soon leave their side, since to listen to and experience Bosnian Rainbows in the flesh is to jump into the grand possibilities of music at its purest and most electric. It transports you to the rock and roll stratosphere and beyond. Below, see photos of their set as well as openers Sister Crayon and Philadelphia’s Mohican. 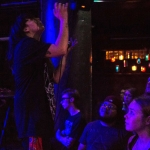