The Veloso Bar in Rio Who is the girl “that swings so cool and sways so gentle?” That’s “tall and tan and young and lovely?” Why, it’s “The Girl From Ipanema”, of course. 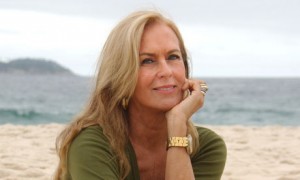 When David Dye and World Cafe went to Brazil for Sense of Place: Rio, they had a chance to find out more about the world’s most iconic Bossa Nova song. Written by composer Antonio Carlos Jobim and poet Vinicius De Morae, the duo were inspired to compose the song by a teenage girl named Heloisa Eneida Menezes Pais Pinto, a native of Rio, in 1962. According to writer Bill DeMain in Performing Songwriter, the song was written at the Veloso Bar (pictured above), a short walk from the beach at Ipanema. It didn’t start out as “The Girl From Ipanema,” however. What began as a song for a musical comedy took a unique twist all because of “the girl.”

Jobim and de Moraes were stalled two verses in on the song they called “Menina que Passa” (“The Girl Who Passes By”). They needed a fresh breeze of inspiration, something vivid to stir their blood. Conjuring up the vision of their favorite hip-swaying distraction, they poured out all their secret longing and lust into the newly titled “Garota da Ipanema.”

The rest is history. When it was recorded by Astrud Gilberto with Stan Getz and João Gilberto in 1964 on the Getz/Gilberto album, English lyrics were added to the song and it became a Top 5 hit song, bringing the sounds of Brazil to the world. It won a number of Grammy Awards including Album of the Year and Record of The Year for “The Girl From Ipanema.”

“The Girl From Ipanema” is the second most recorded song ever. Andy Williams, Amy Winehouse, Kenny G, Sammy Davis, Jr., The B-52’s, Louis Armstrong, Cher, the Charles Watts and the 103rd Street Rhythm Band, and the Four Tops are just some who have covered it. And in case you were wondering, the most recorded song ever is “Yesterday” by The Beatles. David Dye has chosen some killer versions of “The Girl From Ipanema” for you below. From David:

Here is Stan Getz on sax (in a killer cardigan) and Astrud Gilberto playing the song in gorgeous metrocolor in the film Get Yourself A College Girl (and yes, that’s Gary Burton on vibes)

Among the historically important versions of “The Girl From Ipanema” is this one with Frank and Tom (Sinatra and Jobim) in concert.

This one takes a moment to get going but it is Stevie Wonder and his daughter Aisha playing in front of a huge audience at the 2011 Rock In Rio Festival.

Watch this guy spin the original.

A number of women over the years including Dionne Warwick and Petula Clark have turned “the girl” into “The Boy From Ipanema” but Crystal Waters version is my favorite.

Explore the sights and sounds of Sense of Place: Brazil/Rio here.