From The Districts to Dr. Dog, local artists shine at XPoNential Fest
News

From The Districts to Dr. Dog, local artists shine at XPoNential Fest

Despite age, genre and prominence, local acts who played the 2013 XPoNential Music Festival showcased their best for a hometown audience, both on the stage and on the air.

For Aaron Brown, front man for Philadelphia-based rock and soul band Aaron and the Spell, kicking off the festival on Friday night made for an “absolutely fantastic” experience.

“For me and my music, its helping me to find an audience,” Brown said. “It’s really hard to break out there, it’s a lot of bands doing a lot of great work. It’s hard to get out there and get people to even know about you.”

Brown said he hopes playing the festival helped him come away with a few new fans, if not for him personally, than for any members of his talented nine-piece band comprised of all Philly musicians.

“I’m blessed and thankful that new people can find something in me and my band that they appreciate and, hopefully, want to follow, whether it’s the amazing background singers or the amazing horn players or the amazing drummer or guitar player,” he said. “Even if I’m at the bottom of the list, I don’t care.”

Though his soulful voice and sound is sometimes compared favorably to Stevie Wonder, Brown said he doesn’t mind getting constructive criticism from listeners.

“If you see music and you don’t like it and it’s bad, tell the artist,” Brown said. “Don’t be mean, but tell them so artists can get better, some critical thought there that artists can continue to improve. I appreciate that. People do that to me all the time, people tell me I suck non-stop. But you know what, it’s cool and it helps me out.” 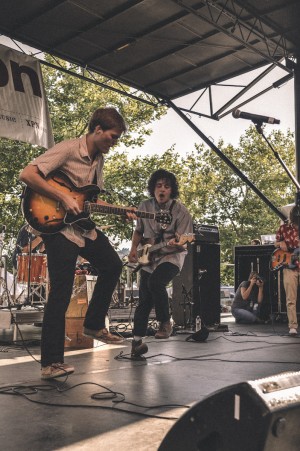 The Districts | Photo by Eric Ashleigh

Lancaster-based bluesy rock band The Districts have had little time between playing Philly house shows and one of its biggest festivals, but didn’t falter during their first set for such a large crowd.

The four-piece band of 18- and 19-year-old musicians agreed that, aside from playing for new people, the best part of the festival was playing alongside some of their favorite national acts on the line-up.

“It’s coolest from like a fanboy stance,” said frontman Rob Grote (even though high-pitched screams from female fans echoed during their own set).

The Districts also cite Philly favorites like Dr. Dog, Man Man and Toy Soldiers as some of their biggest influences, and enjoy playing in the city because of the huge amount of other great acts.

“There are so many people to meet, so many places to go, and the connections between [bands], you find out they’re all connected somehow,” said guitarist Mark Larson. “So once you’re in, word just kind of spreads around. It’s a very music- accepting city.”

Festival-goers saw and very warmly accepted several more regional bands throughout the weekend. Alo Brasil, a Philly-based Brazilian band, brought out the drums, djembes and dancers both on the stage and in the crowd. Even a few members of Red Baraat, a rhythmic bhangra/funk fusion band from Brooklyn, indicated origin from Philly and Jersey, and received verbal praise from the crowd.

Saturday opened more quietly with a set from Lancaster-based folk band The Stray Birds. Maya de Vitry – fiddle, banjo, guitar player and vocalist for the band – was surprised by the volume of the early crowd in both senses of the word. “I [didn’t] know who’s going to be coming out for lunch time at the festival, but they were awesome, and they were loud, too,” she said. “They kind of made up for anybody who didn’t come this early with just the screaming, so it was great.”

The Stray Birds started out playing straight folk, but de Vitry said they’ve recently been branching out into realms of Americana. It’s bands like Mumford and Sons and The Lumineers, who headlined the festival Saturday at the Susquehanna Bank Center, who are really helping to popularize folk music to a larger audience.

“I think they’ve kind of knocked down another door for that folk instrumentation,” she said. “It’s really great because people are like, ‘Oh, well I like them, I’m going to give this a try.’ It’s all connected.”

The fact that the festival aligns both national and local acts benefits both the musicians and the community at large, de Vitry added.

“For us this means a whole lot,” de Vitry said. “I know that there are probably some people playing at the end of the day that it’s like just another big festival. But the fact local artists get a chance to have the same exposure is really, really incredible. …It helps people feel like they are from a really musically rich area themselves. They don’t just have to import music, there’s great music in their backyard.”

During the set of Philly-based pop rock band The Fleeting Ends, frontman Matt Vantine expressed his excitement of being literally aligned with one of his favorite artists. 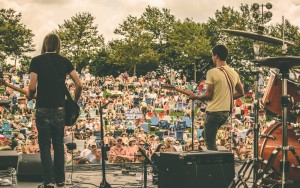 “Who’s excited for Dr. John?” he asked the crowd. “I am. His green room is right next to ours, know how cool that is?”

From the line that formed in the meet-and-greet tent after their set on the big River Stage, there were attendees excited to see their band, as well.

“This was the first time that we’ve seen over a dozen people singing the words to our songs, and obscure songs too, which is very cool,” Vantine said.

“It just felt so natural up there,” added drummer Matt Amadio. “It felt better to play in front of a huge crowd than playing a night club, you know. It felt so much better to be out seeing that many people. It was so surreal almost, to me. It was fantastic.”

Though they felt accomplished after their set, The Fleeting Ends promised this is only one “amazing step forward” for the band. Their driven work ethic falls in line with many other Philly-area musicians.

“Because there are a lot of true, good, honest artists here, and they’re really trying to do something,” Amadio said. “They’re not just like, ‘Oh, I want to start a band.’ They really want to make it something and be something. I think that’s really important because finding drive in people is really hard nowadays, but some of them here really want to do it and get it done.”

“Some of the best music comes out of the mot difficult economic times,” added Vantine. “With everything that’s going on, a lot of good bands are coming out of that. They’re struggling, but that’s what makes you good. You need those defeats. They’re all crucial to you becoming better bands. I think right now is a good time for music.” 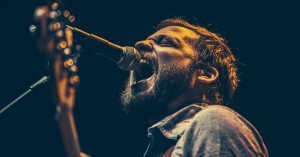 A great example of hard work paying off for local talent is the success of Philly-based (Chester County native) indie rock band Dr. Dog, who opened at the Susquehanna Bank Center Saturday night. The band brought along a few new songs for their hometown audience, and even detailing local inspiration

“I wrote that down by the dog park at 48th and Springfield,” said singer-bassist Toby Leaman after performing a new rocker called “The Distant Light.”

Also ready with some new tunes as they opened Sunday for the XPoNential festival audience was Philly rock band DRGN King, who debuted their song “Fail Big” while also playing tracks off their most recent record, Paragraph Nights. Demand for the local band was high both on and off stage, with a huge line for their meet-and-greet and a sell-out of CDs after their set.

“I’m going to retire now,” joked keyboardist Ritz Reynolds about the velocity of their set.

“Ritz hasn’t played with us live in a while, so it was really cool,” added Dom Angelella about his band’s other founding member. 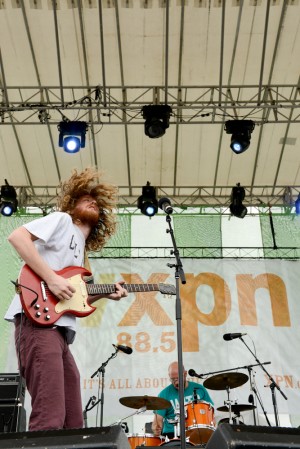 The band said they enjoyed the festival’s diversity both in acts and in people. Angelella was most excited to catch Phosphorescent later that day.

“The thing that’s cool about this festival to me is that it’s really versatile,” he said. “A lot of festivals are almost like secret clubs. Nothing against Mad Decent Block Party, but that’s a very specific style, you know. But this is all pretty versatile.”

Angelella was surprised by the amount of people there early for the third day of the festival despite a drizzling rain that fell during DRGN King’s set. Unknown to him was the impending storm, which lasted from Sunday afternoon into the evening’s performances by Ryan Bingham, My Morning Jacket, Wilco and Bob Dylan.

But rain or shine, it was hard to deny the bright lights of talent, admiration and dedication that shone through the local acts of this year’s XPoNential festival.