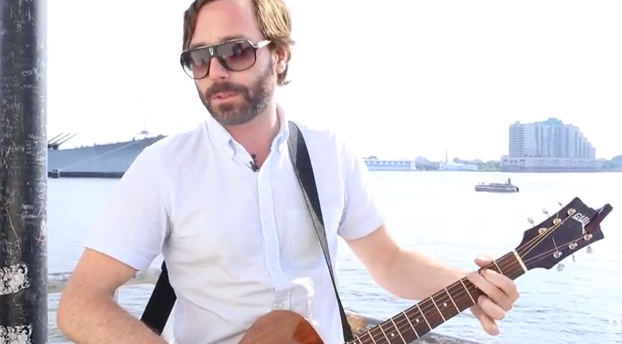 This weekend, Matt Pond and his band played a rousing set at the XPoNential Music Festival on Saturday afternoon (listen back to it here). When he got done, he caught up with our friends at Out of Town Films, who were camped out around the festival grounds capturing offstage performances by several of the bands on the lineup. Their session with Pond, released today, is the first of five videos they shot over the weekend. From OoTF’s Colin Kerrigan:

As you can imagine, electrical outlets are pretty scarce at music festivals so when Matt Pond asked to do a ‘plugged in’ session at WXPN’s XPoNential Festival presented by Subaru we were a little hesitant. So much so that we told them we’d bring an acoustic guitar for them to play. However, things were a little hectic leading up to the festival and we forgot to bring an acoustic.

Luckily, the guys were cool about our forgetfulness and were actually pretty glad we forgot the acoustic since they wanted to do a ‘plugged in’ session in the first place. We found a little space behind their trailer that had an outlet and set up with an enormous battleship in the background. There, they played us two songs. The first being this song, “Hole In My Heart”. Hope you enjoy.

Watch Pond and guitarist Chris Hansen play “Hole in my Heart” below.