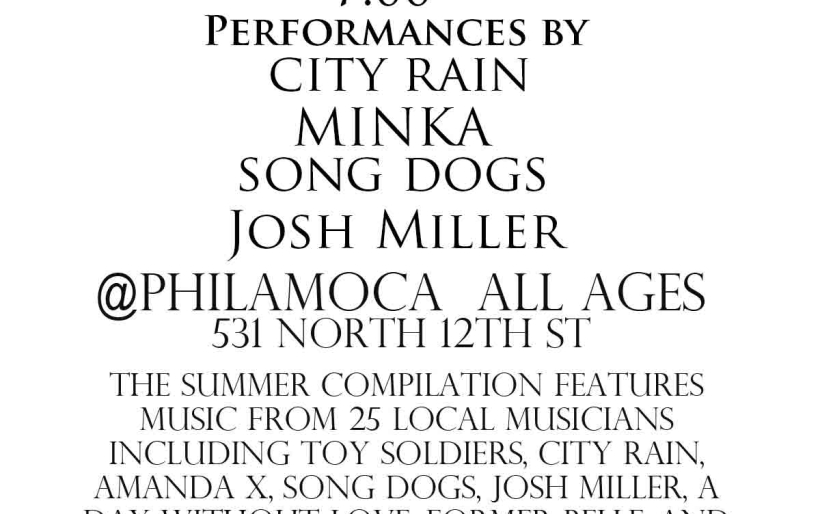 Brian Walker, the singer and songwriter behind Philly’s A Day Without Love, is more than just a musician. He’s on a mission, and a quite noble one at that, “to bring communities together, and to help them grow” though music. His ideals are taking shape with The Quarterly Project, a digital charity label that aims to “unify the diversity of the Philadelphia music scene while being able to help the youth of the community.” In other words, like several other Philly music musicians of late, Walker wants to support music education for Philly youth, despite state budget cuts.

Walker rounded up 25 local musicians, among them Toy Soldiers, Amanda X, City Rain, and Former Belle, each of whom contributed a song to a compilation called Summer 13. The heavily collaborative effort was released last Thursday, August 2nd via Bandcamp, and all of the proceeds will be donated to the local nonprofit, Rock to the Future – a North Philly-based organization dedicated to providing free music education for undeserved Philadelphia youth.

When discussing the project Walker says that “It is important that musicians from the Philadelphia community do their best to not only network with each other, but also help their own community to keep the music growing.” The Summer 13 compilation became available to purchase via Bandcamp last week, and at the end of this month, on August 29th, there will be a an all-ages listening party/benefit concert held at PhilaMOCA, the lineup of which includes Philly artists such as City Rain, Minka, Song Dogs, and Josh Miller. Stream The Quarterly’s Summer 13 comp below; for more on music education in Philly, read our article about Rock to the Future here, read about the H.O.M.E. project at Andrew Jackson school here, and find out about a rally for music education at Liberty Lands Park starring The Dead Milkmen here.