Yes is a dinosaur band that has been reborn: John Diliberto reviews Yestival
Artists

Yes is a dinosaur band that has been reborn: John Diliberto reviews Yestival

This review of the Yestival by John Diliberto, host and producer of Echoes, originally appeared in The Echoes Blog. Listen to Echoes on WXPN Mon-Thursday evenings from 11PM-1AM.

In 1971 I went to the Orpheum Theater in Boston for a double bill of Yes and King Crimson. Being too hip for the room, I was there to see the Islands edition of Crimson. Yes, of course, were just too pop for me. I mean, they had actual hits with “Roundabout” and “I’ve Seen All Good People.” Krimson gave a good performance, although this was the least interesting edition of the band. But Yes, this night anyway, wiped them off the stage with a combination of charisma, impeccable musical virtuosity and Jon Anderson’s choirboy yearning. I walked out a fan, and would have to wait for the Lark’s Tongue edition of Krimson for them to catch up.

I found myself in a similar place this past Saturday night at the Yestival, a one day festival of progressive rock headed by the latest iteration of Yes, and the most controversial. This band always had trouble holding its personnel together, but there was always at least one constant, the signature voice and lyrics of Jon Anderson. But Anderson was effectively booted from the band in 2008, due to a combination of illness and apparent lack of commitment. With the absence of signpost members like drummer Bill Bruford and keyboardist Rick Wakeman, I felt like I was seeing a shadow of this band, no more credible than the Genesis tribute band, The Musical Box, who opened. This couldn’t be the Yes of Fragile or Close To The Edge. This was just a touring paycheck machine.

Uh, I was wrong, which was something that about 5500 people at the Yestival in the Susquehanna Bank Center in Camden, NJ already knew. Anderson’s replacement, (his second actually), Jon Davison, is frighteningly good. The singer for the American symphonic prog group Glass Hammer, he sounds like a clone of Anderson, except a clone who hits all the notes, sings with passion and ties the band together with his stage presence. By the time they hit the “Total Mass Retain” section of Close to the Edge, no one was missing Jon Anderson and no one was thinking Davison was a substitute. He is the lead singer of Yes.

Since this was a festival, Yes was slated to play only two albums straight through instead of the three they’re performing on their solo tour. But they decided to throw in the third album anyway playing Close to the Edge, Going for the One and The Yes Album. What magnificent works they are and beautifully performed. Bassist and co-founder Chris Squire and guitarist Steve Howe, a member of Yes beginning in their classic years, anchored the band. Howe switched between electric guitar and lap steel, whipping out the slides of “Going for the One” and nailing the intensity of “Starship Trooper.” 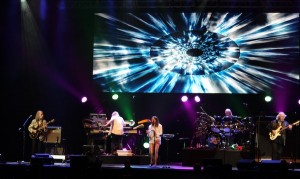 Still an underrated player, Howe matches fleet fingered runs with beautiful tone. Squire stalked, grimaced and yowled stage left, ripping out those chunky bass-lines that are such a Yes signature. Neither keyboardist Geoff Downes nor drummer Alan White, both members of later Yes editions, took much of the spotlight, but they provided the orchestral color and rhythmic thrust so essential to this group, who, for all their odd time signatures and multi-movement works, really drives as hard as any rock band. I don’t care about the excess; nine keyboards stacked up just have a certain gravitas and power that the smaller keyboard set-ups of Volto! and Renaissance couldn’t match. I can’t say the same for Chris Squire’s triple necked guitar he pulled out at one point. One Rickenbacker bass is really all he needs.

The staging was tasteful and immersive with a wide screen projection that took the appropriate Yes album covers, animated them, ran them through digital effects and mixed them in to other surreal scenes and digital designs.

Yes is a dinosaur band that has been reborn. Now all they need is some good new material so they don’t become a nostalgia act. Hearing Close to the Edge, Going for the One and The Yes Album in sequence made you realize just how glorious this band was and can be.

Speaking of nostalgia acts, there’s The Musical Box, part of a Festival undercard thought would’ve made for an average Nearfest line-up, the late lamented annual ProgRock Festival that ended last year. The Musical Box is a French-Canadian Genesis tribute band known for using actual costumes from the Peter Gabriel-era of the band and mimicking everything from instruments to microphones to stage stances, like François Gagnon, playing Steve Hackett, sitting down stage right. I never saw the band during Genesis’ golden age, but I always took Gabriel’s approach to be very serious. Although Denis Gagné does a good Peter Gabriel imitation, he turns serious to dour. Opening with “Watcher of the Skies” they assayed several Genesis classics with Gagné going through something like nine costume changes including the bat wings and flowerhead that Gabriel used to wear. In replicating the pre-Lamb Lies Down On Broadway-era of Genesis, The Musical Box made the mistake of creating a smaller stage within the large Susquehanna Stage. Surrounded by white curtains that cut stage depth by two-thirds and halved the width, they made their performance space more like a large club rather than a large arena. And the effect of their performance seemed to shrink proportionally. I know Genesis fans who love the Box, but I found them unnecessary at best.

Preceding The Musical Box was Renaissance, true veterans of the Progressive rock era although only singer Annie Haslam remains from the classic line-up of the band. After some shaky years, Haslam’s voice has been getting consistently stronger and she hit those high, soaring notes on “Carpet of the Sun” and “Mother Russia,” although there was always an edge to it, like she might not make it. But she did. On tracks from their new album, Grandine il Vento, she sounded much more comfortable, working in a range more suited to her current voice. Surprisingly, after nearly 40 years of performing, Haslam lacked any stage presence at all. She set herself left of center on stage with the center microphone taken by her bassist. She seemed especially uncomfortable during instrumental passages, rocking and swaying awkwardly in what could best be described as over-sized red print pajamas. It could worst be described as unflattering. Surrounded by a relatively faceless band, Renaissance lacked the magical sound of the original band.

How can you tell when it’s the drummer’s band? When the drum riser is at the front of the stage.

That was the case with The Carl Palmer Band. Think of it as the anti-Keith Emerson and Greg Lake edition of Emerson, Lake & Palmer: No keyboards and no vocals. A slide collage during “Nutrocker” would have you think that ELP was Carl Palmer and Friends. CPB is an instrumental power trio turning ELP songs into heavy metal.

Carl Palmer is aging with a golf pro’s grace, but behind the drums he whipped up a storm. Guitarist Paul Bielatowicz looked like he snuck in from the School of Rock band that was playing the second stage, but he could play, taking Keith Emerson’s lines and Greg Lake’s vocal melodies and turning them into fret-burning licks. Bassist Simon Fitzpatrick, who may be a refugee from the Allman Brothers Band, locked down Greg Lake’s bass riffs and then some. They tore into “Knife Edge” (lifted from Leo Janacek’s “Sinfonietta”) and did a version of Mussorsky’s “Pictures at an Exhibition” that I found more inventive than the original ELP version. And did I hear a Black Sabbath riff in there somewhere?

Heavy Metal was also evident in the sound of Volto!, a new quartet consisting of Lance Morrison on bass, Danny Carey (of Tool) on drums, John Ziegler on guitar, and Jeff Babko on keyboards. The band oscillates between Sabbath-style metal riffs and Mahavishnu Orchestra-style pyrotechnics. Sitting in a chair and looking like a goateed Buddha with a pork pie hat, Ziegler is a ferocious player who starts in overdrive and accelerates from there. With his double-kick drums, Carey is in familiar polyrhythmic turf here while the bald Lance Morrison eschewed Jaco Pastorius fusion flash for deep, propulsive grooves.

Apparently, a band called Scale the Summit opened, however, they came on before the scheduled start time and were never announced in any material I saw. With the departure of Nearfest, Yestival was a welcome replacement although I suspect Yes is so far above the rest of the bill that they probably could’ve gotten this audience on their own. The only sour notes of Yestival were the absence of the advertised quadraphonic sound and the between-act music. I like James Brown, but this was a Progressive Rock festival. Save James Brown for the R&B shows and get a DJ who can deliver the Prog next time.

In summary, a cynic of the newborn Yes has been silenced. That would be me.