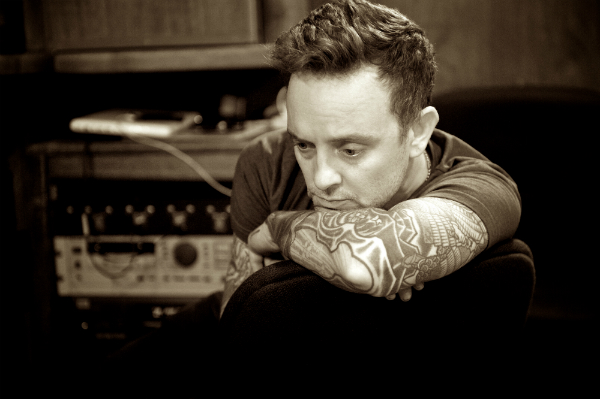 Watch Dave Hause record his new Devour LP with members of Frightened Rabbit, My Morning Jacket and the Watson Twins

Dave Hause probably gets tired of being called a “punk troubadour”, but it’s a title that fits him so well. There are those tatts, the anthemic hooks, and the hardcore background in bands like Paint it Black, The Curse and The Loved Ones. But there’s also his knack for melody, attention to songwriting detail, and the circles he moves in as a touring and recording artist.

This week, American Songwriter revealed some details on the new record, due out October 8th on Rise Records, and shared a trailer video showing Hause in the recording studio with his band. In an accompanying interview, Hause reveals the personal undercurrent of the new songs:

“The lyrical content on Devour was pretty extreme; I was writing my way through some significant mid-thirties heartbreak, and I was coming to terms with how my own demons — and the appetite that’s hard-wired into American culture — can end up haunting you as you get older. It was a really difficult album to finish. I wanted to find a silver lining, and it took a while to figure out how to end on a hopeful note. That ended up being the last third of the record.”

Watch the Devour album trailer below; for more, listen to Hause’s new single “We Could Be Kings,” released last month.