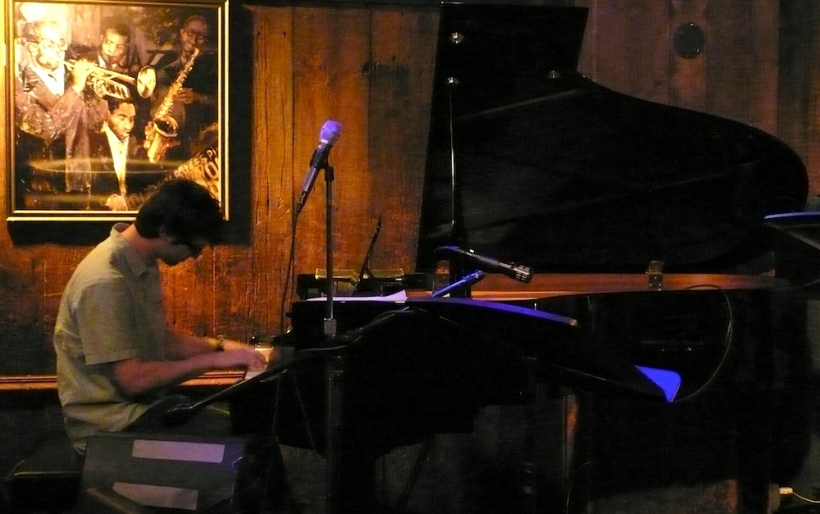 As a genre, jazz is quick to be associated with an older generation of musicians, but the Alex Cross Quintet seeks to rework (and revitalize) this image.

The frontman of the ensemble, Alex Cross is a jazz pianist. He’s played a handful of gigs in Philadelphia, performed for the past several years, and he’s done all of this before his twenty-first birthday.

A native of Wallingford, Connecticut, Cross received his first classical piano lesson when he was five. He continued his instruction, but began listening to the likes of Herbie Hancock and Bill Evans in high school and became fascinated by the syncopated drum beats and slow modal harmonies.

So Cross put Tchaikovsky and Chopin on the backburner, took up jazz and has not looked back. “I enjoyed the classical piano,” Cross says, “but I felt that my creative side needed to get out there. With jazz you’re able to improvise, to include your own emotions.”

Cross explains that since jazz seemed like the perfect fit for him, he decided to make it his primary focus in college. Now a rising junior at Temple University, he majors in jazz performance. Cross began his studies by concentrating solely on perfecting his technique and mastering the works of established musicians — but once he started to explore composition, Cross looked for additional avenues that would allow him to refine and experiment with his abilities.

“I realized it was good opportunity and a good time to start my own group,” says Cross. “It’s one thing to sit in a practice room and go over ideas and find your own sound. But the second you get on the bandstand, you have to try to let everything happen naturally.”

As a result, the Alex Cross Quintet was founded about a year ago. All of the group members (Alex Cross, Phil Arrington, Andrew Pereira, Jack Synoski and Matt Nelms) are Temple undergraduates, who participate in the same performance program. Arrington, the drummer of the quintet, shares Cross’ enthusiasm for the improvisation afforded by jazz. He adds, “Jazz is a quest to understand a deeper type of music. It requires a lot of knowledge and a lot of practice.”

On the approach of the group, Cross explains that the quintet enjoys modernizing tunes that have been admired for generations. “We like to take jazz standards and re-harmonize them or introduce different arrangements,” he shares.

A recent transfer to Temple University and an alto saxophone performer, Andrew Pereira appreciates that the group can create in an open environment — able to explore original work while respecting the traditions of the genre. “A group like [the Alex Cross Quintet] is great for testing the waters with some of our own original material, which is important for developing artists,” Pereira says.

But Cross says that the quintet also performs material composed or arranged by contemporary artists. In particular, Cross is inspired (and intrigued) by the work of Terence Blanchard, Erin Parks and Robert Glasper.

“They take what artists have done in the past, and while keeping that music true to the jazz genre, have thrown in new sounds to make it more modern or futuristic,” says Cross. Cross also highlights the communication to be found in jazz, whether it’s between collectives or individual group members.

“When you’re playing in a group, it’s a team effort,” Cross says. “You bounce ideas off of one another and really talk through the music. There’s no better feeling in the world.”

Arrington agrees, noting that the group members are not only fellow musicians — willing and wanting to develop sound together — but that they are also close friends.

“Musical connection is a personal connection, and jazz, above all other genres, allows you to form that connection,” says Pereira. “You create something you could never create on your own.”

The Alex Cross Quintet has now performed four or five times at Chris’ Jazz Café, a staple of the jazz scene in Philadelphia. Booking agent Alan McMahon explains that the club has increased its focus on younger bands in order to offer them a creative outlet and a chance to be heard.

“One of our priorities is having some room for young developing talent,” says McMahon. “They need a place to play.”

McMahon also emphasizes that the younger bands are often successful at self promotion, using the tools of social media to their advantage and filling the audience with friends and fans. And on the whole, he believes that this generation will be able to continue the jazz tradition.

“These musicians are coming from colleges with great programs,” McMahon says. “They’re in the developmental stages, but they’re the future of jazz.”

Although Chris’ Jazz Cafe is perhaps the only fully functioning club in Philadelphia which offers a range of mainstream jazz, the members of the Alex Cross Quintet are optimistic about the opportunities available in the area and intend to try their hand at a career in the jazz world.

“Philly is great place for musicians to practice their craft because it’s such a close knit community of musicians and there’s a lot of talent,” Pereira says.

Take a listen below to a live set performed by four members of the Alex Cross Quintet at Chris’ on July 25th and check out the club’s schedule for future events.