The Key's Week Of Folk: Entering into the world of Philly Folk Fest with At Fest - WXPN 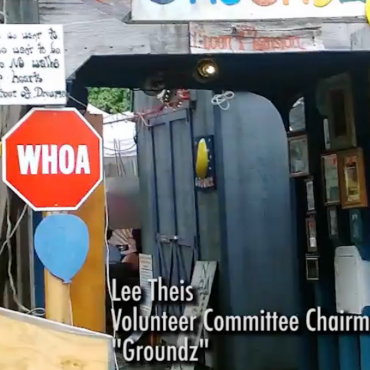 The Key’s Week Of Folk: Entering into the world of Philly Folk Fest with At Fest

Welcome to Week of Folk, a series of interviews, reviews, artist spotlights, playlistings and general ephemera to get you ready for the 52nd Annual Philadelphia Folk Festival, happening August 16th to August 18th at Old Pool Farm in Schwenksville. We begin with our thoughts on one documentary filmmaker’s attempt to sum up Philly Folk in the 90-something minutes.

You know you’re with a devoted audience when the movie screening has cheering sections.

As soon as Lee Theis, chair of the Philadelphia Folk Festival “Groundz” committee (and an utterly recognizable face at the festival every year), appeared on the big screen, a roar emerged from the right rear of the theater. Or more like a burst of applause and a swell of voices hollering “Groundz!” Later on, members of the recycling committee made their first appearance on screen, and a similar enthused, “go team” reaction emerged from the front row.

It happened when longtime folks-about-Fest were interviewed, it happened when popular scenes of campground absurdity (like the annual water balloon fight) appeared onscreen. It was clear that this was an amongst-friends audience, and that the film – James Wallaces’ At Fest, which made its world premiere at The Trocadero last Wednesday night – was on a certain level a film about festies, by festies, for festies. But it was also a great introduction for the uninitiated, an explanation of this long-running regional event and the culture surrounding it (albeit through a G-rated lens). 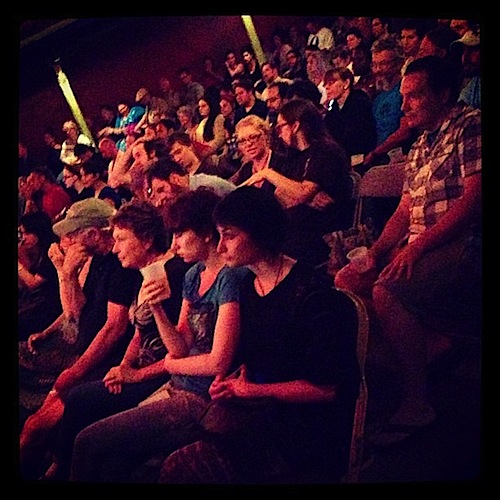 To underscore the night’s homey atmosphere – and to presage the dwellings that much of the festival-attending crowd will call home for the coming weekend – the At Fest crew set up a decorated tent next to a crepe-paper campfire towards the back of the theater. The first five to ten minutes of the film is a montage of soundbites from ateendees who all share a common refrain. “I met my husband / wife here. I grew up here. This is my family.”

“Here” refers not only to Folk Fest in general, but to its sprawling campground in specific, and the community housed within. This is an element of Folk Fest that the day-trippers – the crowd who just comes in for the afternoon, watches whatever headliner, and heads home – completely miss out on. It’s unshowered and often muddy; it can be a bit dysfunctional at times; but it’s also utterly filled with joy. At Fest spends a good deal of time dissecting this community, interviewing festival goers, parents and granparents, following them in as they pitch tents and help their neighbors when the rain storm crashes down, talking about their lives in the outside world and how Folk Fest plays in. The film paints perhaps a bit of an overly wholesome picture of the campground experience. It’s a big party, Wallace shows us, it’s kooky and weird! But if you were to go solely by his lens, you’d know nothing of the more, er, illicit things that go on within the gate (that, for better or worse, are part and parcel of any music festival in 2013).

Still, by focusing his lens on the family-friendly, Wallace captures moments of breathtaking beauty that are unique to Philly Folk – such as a stunning sequence where he takes the viewer inside the mass launch of paper lanterns after dark. It’s one thing to catch a glimpse of the floating orbs from the lawn of the festival as musicians are performing on the stage in front of you. It’s something else entirely to watch first hand as they are set aloft.

From there, the film travels a variety of paths. WXPN’s Gene Shay provides history and context about the festival’s origins and the continued relevance of the folk revival. Spotlights on performers give a view of the artist experience. We see touring favorites David Wax Museum (one of the national bands on the 50th annual Folk Fest, when this was filmed) alongside locals HogMaw and Philadelphia Jug Band, who were not only performers at the 50th, but also longtime campers.

The latter show both worlds of the Folk Fest – HogMaw fiddler Ryann Lynch in particular being the most compelling interview of the film. She is shown as an artist touring regionally and performing on the Old Pool Farm stage. She’s also seen as a woman with a day job as a music therapist who talks about how Fest walks hand-in-hand her real-world life. And we see her camping with her sixty-something parents, talking about growing up in the Folk Fest universe, and showing how with this summer’s 52nd festival, the community has truly crossed generations.

James Wallace’s At Fest screens tonight at Brooklyn Bowl in New York, and will be available on DVD at the Philly Folk Festival. Check back later today for an audio overview of this year’s Festival lineup.