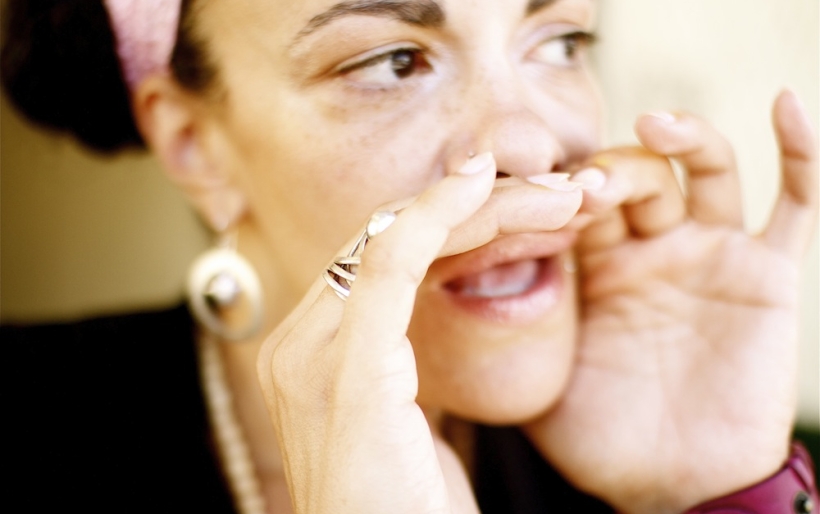 The Key’s Week of Folk: Ursula Rucker, and four other artists you didn’t realize are playing #PFF2013

The Key’s Week of Folk is our series of interviews, reviews, artist spotlights, playlistings and general ephemera to get you ready for the 52nd Annual Philadelphia Folk Festival, happening August 16th to August 18th at Old Pool Farm in Schwenksville. This installment highlights a handful of artists we didn’t even were realize were playing – so it’s possible you didn’t know either.

On Monday we talked about what a daunting task navigating a festival lineup can be. Between sheer volume of names, late lineup additions and lag time between initial announcements and the actual show, I find myself at festivals – any festival – saying at least once “oh, woah, they’re playing!” (Confession: it even happens at our own XPoNential Music Festival.)

For this installment of The Key’s Week of Folk, we’ll highlight a handful of don’t-miss you-almost-missed-thems, beginning with the one and only Ursula Rucker. Her’s is a name that Roots aficionados should know well; the Philadelphia poet first came to prominence closing the group’s first several albums with spoken word pieces (and appearing throughout the mix on 2003’s Phrenology). Sometimes tender, sometimes shocking, but always marked by beauty and eloquence, Rucker’s collaborations with The Roots – as well as with Bahamadia and King Britt – ultimately paved the way for a solo career that notably includes 2001’s Super Sista, 2006’s Ma’at Mama and most recently, 2011’s She Said. Along with writing, Rucker is an educator and activist, and recently has been combining her words with the stylish guitar of fellow Philadelphian Tim Motzer. The two will perform together at the Cultural Tent on August 16th at 7 p.m. Below, watch a video of Rucker and Motzer on the 1k Sessions, and listen to Rucker’s contribution to The Roots’ Things Fall Apart, “Return to Innocence Lost.”

Short of some outstanding vocal harmonies, Philly rocker Juston Stens and his band The Get Real Gang don’t exactly do a lot that you’d consider “folk.” That’s okay, though. They’re sure-fire crowd pleasers, and have a variety of material to draw on, from their debut LP Trash or Treasure to the soon-to-be-released Share The Road. The riffs are driving 70s rock style, the look is Easy Rider and moustachioed, and the energy is through the roof. The band plays the Helen Leicht-curated WXPN Philly Local Showcase on Saturday, August 17th at 12:10 p.m. Watch a BITBY video of their appearance at Caravan Festival 2012 below.

For the amount that banjofied six-piece New Sweden gigs around the area, I can’t say I’m totally surprised they’ll be at Philly Folk. The Wilmington crew apparently even played a pop-up show at XPoNential Fest! On this lineup, though, they’re official, and appearing throughout the weekend. On Friday, they’ll be at the Cultural Tent at 4 p.m., giving a talk about the fundamentals of songwriting. On Sunday, they’ll play the Front Porch stage at 3 p.m. And in between, they’ll hit the festival “backstage sessions” with a group of their peers at least twice. Below, watch a video of them performing “Frying Pan” in the parking lot of Ram Jam last year.

Spend enough time on the folk circuit, and you’ll notice lots of genre-stretching and fusion; bands informing what is essentially pop songwriting with traditional sounds, rather than the other way around. Philly’s Runa, on the other hand, stands out in that they’re essentially a straight-up traditional Celtic group, from Shannon Lambert-Ryan’s haunting vocal delivery and multi-octave range, to evocative fiddle work by Tomoko Omura and driven arrangements by the group at large. The band released their album Somewhere Along the Road last year, and plays the main stage Friday night at 8:30. Below, watch a video of them performing “Lowlands of Holland” at a house show.

Shawn Hennessey drums for so many musicians in the tri-state area, it’s good to see him coming into his own with the eclectic army that is Hennessey Bonfire. A thirteen-piece at last count, the group draws from a variety of global music sounds from Afro-Cuban to Indian and beyond, synthesizing them into a meditative and groove-based whole. The project’s 2013 album Let’s Get Carried Away is something like five years in the making, and it sounds like it, between the broad net it casts and the layers of sound it delivers. Catch them at the lobby stage on Friday at 2:50, and listen to “Save Me Some Relief” below.