The Key's Week of Folk: John Hartford's classic 1971Aereo-Plain to get the full album tribute treatment at #PFF2013 - WXPN | Vinyl At Heart

The Key’s Week of Folk: John Hartford’s classic 1971Aereo-Plain to get the full album tribute treatment at #PFF2013
WXPN Local

The Key’s Week of Folk: John Hartford’s classic 1971Aereo-Plain to get the full album tribute treatment at #PFF2013

The Key’s Week of Folk is our series of interviews, reviews, artist spotlights, playlistings and general ephemera to get you ready for the 52nd Annual Philadelphia Folk Festival, happening now through this Sunday at Old Pool Farm in Schwenksville.

In 1971, folk/country/bluegrass singer-songwriter John Hartford released his groundbreaking Aereo-Plain album on Warner Brothers Records. For many, it become the blueprint (a very early one at that) for “newgrass.” No Depression, who says Hartford put the “American in Americana,” assembled a band of virtuoso players and acoustic music legends: Norman Blake, Vassar Clements, Tut Taylor, Randy Scruggs (son of bluegrass / country legend Earl Scruggs). The album was produced by David Bromberg. Old timey, eccentric, often tender yet equally as bizarre, Aereo-Plain was richly steeped in folk tradition. The album has some of Hartford’s most memorable songs on it including “Boogie,” “Turn The Radio On,” and “First Girl I Loved.” All this from the same musician who wrote the classic mainstream Grammy award winning pop hit “Gentle On My Mind.” 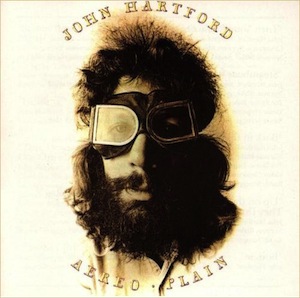 Tomorrow at the Philly Folk Festival (2:30PM at the Craft Stage), Hartford’s Aereo-Plane gets the album tribute treatment by a group of Philly’s most talented players: Phil D’Agostino, Brad Hinton, Jay Ansill and Michael Beaky. John Vettese of The Key reached out via e-mail to Phil and Brad to hear more about the project and to get their perspective on the importance of the album.

Brad Hinton (BH): Phil had the idea to cover this seminal album. We have been playing “Steam Powered” tunes for a while now in previous bands. I guess I first heard the album when I started getting into bluegrass back in college. Much like Old and in the Way (the 1973 bluegrass “supergroup” album project featuring Jerry Garcia, David Grisman, Peter Rowan, Vassar Clements, and John Kahn – editor’s note) was a bridge of sorts between genres, Steam Powered Aereo-Plain introduced bluegrass to a different audience. Hartford’s album was released in 1971 and is regarded as the first “Newgrass” record. Was mostly a jam of sorts, the band was made up of some heavy hitters. John Hartford was a witty and talented man, playing the fiddle and singing while accompanying himself with tap shoes on a wooden board. He was also a tremendous banjo and guitar player.

Phil D’Agostino (PD) : This record, to me, is progressive music in the truest sense of the word. Not in terms of the genre or technically dazzling or intricate, but before this record bluegrass/folk music was in one place and after it it was somewhere else. Progressed. And it will never stop being progressive because as a bluegrass or folk music fan or musician, once you hear this record for the first time you’ll think about the music in a whole new way.

The idea came up when Brad and I were in Wissahickon Chicken Shack. We had a weekly residency at the Dawson Street Pub in Manayunk and we wanted to do a different record in its entirety each week. We did the Byrds’ Sweetheart of the Rodeo and Gillian Welch’s Revival. We planned on doing Aereo-Plain but just never got it together. Last summer I told Jesse Lundy (of the Philadelphia Folk Festival) one night how I’d like an opportunity to somehow do that record sometime, and he said “Lets do it!” so we’re doin’ it.

BH: During our performance, we will play Aereo-Plain in its entirety much like you’d hear it on the record. We didn’t want to take too many liberties with this material. After the album we will play a few other classic Hartford tunes not on the album, featuring guest performances by local musicians.

The Steam Powered Aereo Band tribute to John Hartford takes place tomorrow at the Philly Folk Festival at 2:30 on the Craft Stage. With these players and special guests, it’s surely a performance to not miss. Below, sample a couple of classics from Hartford’s Aereo-Plain.