The Friday lineup at the 52nd Annual Philadelphia Folk Festival was eclectic and exciting, beginning with a cluster of Philadelphia music scene staples and wrapping up with electrifying and impressive performance from folk scene mainstay Richard Thompson.

The Lawsuits kicked off the day on the main stage with an assortment of songs from their forthcoming LP Cool Cool Cool; they were poppy, they were country, they were classic rock, with songwriter Brian Dale Allen Strouse stepping behind the Steinway for a snappy take on “Onion” and singer Vanessa Winters owning “Long Drive Home” with a twangy vocal.

Lancaster trio The Stray Birds performed an assortment of songs from the as-yet-untitled album they just finished recording last week, Marc Silver rocked out some songs from his new story-centered album A Miner’s Tale, andToy Soldiers tore across a lively set of bluesy rockabilly from their forthcoming sophomore LP The Maybe Boys, due out September 10th.

Poet Ursula Rucker’s collaborative set with Philly guitar wizard Tim Motzer was easily the day’s highlight. While she read (and occasionally sang) pieces addressing social justice, racial prejudice,. gender and identity (among other topics), Motzer played a hypnotic guitar backing. Her performance of “Philadelphia Child” was particularly moving, as was the concluding call-and-response of “Super Sista.”

After an enjoyable performance from Philly-area celtic crew Runa, Richard Thompson took the stage to a thinning (but devoted) crowd. Thompson has played the fest several times as a solo artist; this time he was with his electric trio, which began on a jarringly funky note, but quickly settled into a groove that let Thompson’s guitar skills shine through. His nimble guitar shredding was impressive, “Shoot Out The Lights” backed by the band packed a punch that the song lacks when Thompson plays it solo. And his solo stab at “1952 Vincent Black Lightning,” while not unexpected, didn’t disappoint either. Check out photos from the day in the gallery below. 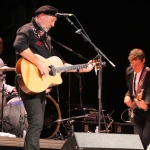