By John Vettese
August 21, 2013
11:08 AM
Share
Gathered in the Dulcimer Grove, waiting out the fire evacuation | Photo by John Vettese

The Sunday lineup is typically the quiet denouement of Philly Folk Fest, but this year was jam-packed with happenings, including a rootsy wakeup set on the Camp Stage by Spirit Family Reunion; an impressive showing on the Tank Stage by Philly’s Up the Chain; a capella gospel harmonies from Como Mamas; and what MC Gene Shay later dubbed “a fire drill.”

A small fire broke out in the food vending area at the top of the hill on the main concert grounds, and the crowd was quietly rounded up by security and ushered off to either the craft area of Dulcimer Grove while the Upper Salford Fire Company was called in to dispense with the blaze. Meanwhile, impromptu performances by guitar-carrying Fest volunteers popped up in the grove while the crowd waited for a little over a half hour. (Evidently, Carolina Chocolate Drops also played an impromptu acoustic set while stuck backstage.)

A banjo lick from the CCD’s signaled that it was safe for everybody to return to the festival grounds, and the night wrapped up with sets from The Rev. Peyton’s Big Damn Band, David Bromberg and Asleep at the Wheel. Check out photos of the day in the gallery below, and don’t miss our week of festival coverage in The Key’s Week of Folk. 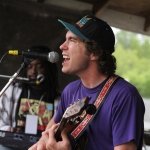