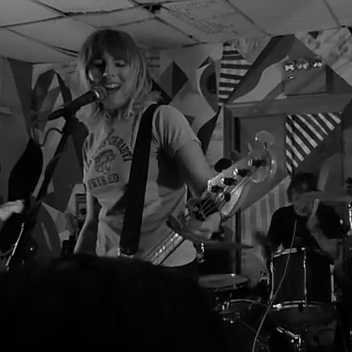 As much as they excel at snappy hooks and soaring harmonies, Bleeding Rainbow‘s passion clearly lies in noisepunk shredders. On Thursday night, the Philadelphia four-piece played Death By Audio in Brooklyn with A Place to Bury Strangers, and unveiled a new jam called “Start Again.” The nervy song kicks off on a racing tempo with guitarist Rob Garcia on snarling solo vocals for about the first minute, before bassist Sarah Everton enters and the group’s trademark harmonies come to the surface. Conclusion: the song ultimately lies fuzzed-out pop we love Bleeding Rainbow for, but takes a super badass route to get there. Watch a video of “Start Again” below.