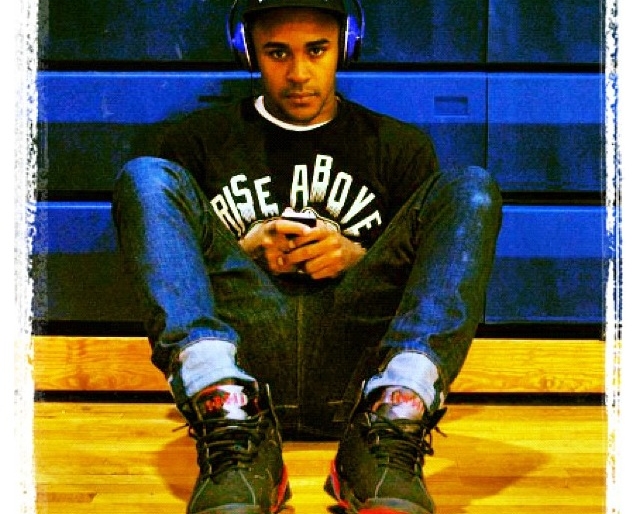 Philly rapper JustXSudan released his first track just over two weeks ago. It’s only a minute and a half long, but it sounds like something much greater – a fully-formed slice of philosophical hiphop that has this 18-year-old spitter looking like he’s poised to do great things.

“Away,” produced by New York beatmaker Chuma Osse, launches with a suave guitar line and two layers of interlocked beats. It’s swift and punchy, and JustXSudan raps about, well, rap – performance as a means of connection and socialization, performance as a way of living one’s dreams.  A rumbling bass kicks in, and he contines: “Focused my vision / promised my mom that I would never take the prison route.”

His mom, we should note, is Ursula Rucker, poet, activist and longtime collaborator of The Roots, King Britt and more. We came across this track from JustXSudan while reading up on her appearance at Philly Folk Fest a couple weeks ago; at the festival, we got to meet him and talk about how his own musical path emerged.

“I was always in the studio growing up,” he said. “You’d think I’d get tired of it, but I’ve just grown a huge love for it. And I have people like King Britt, all these people around who can help me. I’m just around good people. They all said I should be doing something.”

Sudan says he rapped and kind of kept it to himself for years, until the encouragement from his friends and family pushed him to make the leap. This summer he decided he’d put something out, and hoped people would like it. He says he connected with producer Osee at a diversity conference in New York, and began working on the project (tentatively an EP called JustXRight) in a West Philly basement studio – the same space that got OCD: Moosh and Twist on their way to mass-popularity. When he started out, he says, “I was more trying to rap like everybody else. I rap for my mom a lot, and she kind of pushed me to do my own thing, you know? So basically I rap about whatever I’m feeling. Sometimes it will take a week to finish one rap.”

“Away” concludes on a powerful line that cycles back to why Sudan wants to be a performer: seizing the moment, living for oneself. “I never stop, ’cause I could be Tray / shot in the chest, never to see the day.” He wrote that line the week that a Florida jury found George Zimmerman not guilty in the shooting death of Trayvon Martin. Sudan says he was moved and let his feelings come across in the studio.

“I just went into the booth, I was rapping, and it just came to my head,” he says. “It was not written down. And I was surprised too! I was like woah…it was spontaneous! I’m actually trying to do that for the rest of my rhymes; I’ll finish it and add a little bit on at the end of each.”

This fall, JustXSudan heads up to Queens for his freshman year at St. John’s University; it’s where J. Cole went, and he admits that influenced his decision a bit. But we wrapped up our conversation by talking about another influence – Rucker, his mom, whose unflinching poetic lyricism can be shocking sometimes, it can be tender and beautiful other times, but is always emotionally affecting.

“Yeah, it’s pretty intimidating,” he laughs. “I’m still afraid to rap for her sometimes, ’cause going into rap as a teenager from Philly, I’m influenced by so much negative stuff too. It’s hard to break away from that sometimes. Sometimes I’ll rap about stupid stuff, but my mom really pushed me to just, you know, be myself. … It’s hard having Ursula as my mom, but it’s also a really good thing too.”