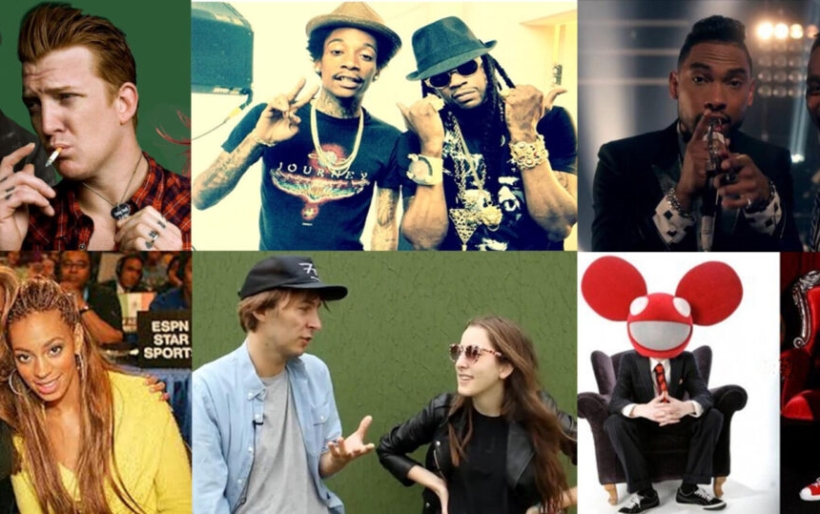 9 live collaborations we hope will happen at Made in America

Ahh, music festivals. There are so many reasons to <3 live festivals, from the constant performances all around you, to stumbling upon your new favorite groups, to the energy and vibes of everybody else, excited to be outside, watching their favorite bands.

Yet music festivals aren’t just great places to catch sets—they’re also unique breeding grounds that allow myriad artists, who might not necessarily perform together otherwise, to come together, spurring new or unique collaborations. From Bob Dylan joining Joan Baez at the 1963 Newport Folk Festival—to Bon Iver joining Kanye more recently at Coachella—we love being surprised by artists not afraid to try something new. In honor of the Made in America festival hitting town this weekend—here are 9 dream collaborations we’ve love to see live—and a rough guess at the probability of each.

Likelihood: somewhat likely. The two groups will head out on tour together this November—and Haim have even started learning French to prepare (adorable video here). Both bands are scheduled to play the fest at different times on Saturday—which means Haim should have plenty of time to grab some eats and change, before hopping on stage with Phoenix to sing back-up.

2. Nine Inch Nails and Queens of the Stone Age

What could be better than seeing these two ‘90s rock stalwarts together, in one face-melting performance? Both bands helped us through the awkwardness of adolescence, providing an outlet for rage, and hair-brush singing (although our parents HATED us listening to “Closer”) and this Sunday, both take on the same stage…possibly together?

Likelihood: somewhat likely. Trent Reznor collaborated on QOTSA’s new record, …Like Clockwork, and even jammed with QOTSA frontman Josh Homme and Dave Grohl for the Sound City soundtrack earlier this year. So the two bands are definitely friendly—we’re  hoping QOTSA play “Kalopsia” (featuring Reznor) and we can all revel in hard rock raucousness.

West Coast rapper Kendrick Lamar made headlines earlier this month with a rap verse (left over from Big Sean’s Hall of Fame record) that dissed a whole slew of current rappers, Rocky included. Many of those named were quick to respond (in verse form or otherwise) but our man Rocky held his cool, saying that hip-hop is all about competition and that “rap is an outlet to express and say anything you want.” Will they settle their beef publicly at MIA?

Likelihood: unlikely. While this is probably the collab people attuned to the story are most hoping for, we say it’s probably not gonna happen. Both rappers play different days of the festival, and Lamar is already scheduled to appear with his own entourage of guests, including Schoolboy Q, Jack Rock, and Ab-Soul. Is there room for Rocky too? We’ll see.

The electro and dubstep contingent at this year’s MIA Fest should be pleased, with DeadMau5, Wolfgang Gartner, and Nero all providing body-rocking beats guaranteed to leave you sweating. We’re already feeling DeadMau and Gartner’s 2010 collab “Animal Rights”—not to mention Nero’s remix of DeadMau’s “Ghosts N Stuff”—but does this mean we’ll get to experience it live?

Likelihood: somewhat unlikely. DeadMau and Nero perform on different days of the fest, making a joint appearance less feasible—but DeadMau and Gartner perform just one hour apart on Saturday night. We know DeadMau rarely performs without his giant mouse head—but that doesn’t mean Gartner can’t hop on stage with him, and do some re-mixing on the fly.

Wiz and 2 Chainz have joined forces before, on Fast and Furious 6 tune “We Own It,” and on Wiz’s new track “It’s Nothin”—and as far as we can tell, share a love of good vibes and um, good bud. But do they share a love of performing together?

Likelihood: somewhat unlikely. The two rappers perform on different days of the fest, which means the other would have to LEAVE his hotel-suite party and stumble down to the Parkway on his off-day to perform. So we’re not gonna say it won’t happen, but… you know…

Miguel is a man of many collaborations. In the past two years alone, he’s lent his sultry vocals to everyone from Fat Joe to Mariah Carey—and has rocked each performance thanks to his versatility and skill. For MIA this year, we’d love to see him join forces with Kendrick (who contributes a verse to his 2013 single “How Many Drinks”) or Wiz (who he collaborated with at the 2013 Grammy awards.)

Likelihood: unlikely. Miguel’s set immediately follows Kendrick’s, and precedes Wiz’s—on different festival stages. Should the gods of time grant Miguel a wormhole, which allows him to travel back and forth magically—this could happen. Otherwise…it probably won’t.

7. The Gaslight Anthem and The Front Bottoms

The Gaslight Anthem and The Front Bottoms both rep Jersey hard, with passionate, working class anthems that makes us want to head-bang happily. As far as we can tell, they’ve never collaborated before, although we’re willing to bet they’ve at least shared beers together once or twice, perhaps at the Stone Pony?

Likelihood: We’re going to go ahead and call this one somewhat likely, even though we have no proof these bands know or like each other. They’re both playing Sunday night, with set times far enough apart that it could happen. Should it? We say yes!!

Knowles sisters Beyonce and Solange share a last name, a penchant for fashion, and the gift of amazing pipes. And while the two powerhouses have each found success on their own terms, they’ve always been supportive of each other, and have been known to share in good times as a pair.

Likelihood: likely. If Tina Knowles taught her daughters anything, it’s to never forget where you come from (and to always look amazing). We’re hoping Solange hops on stage during big sis Bey’s headlining set—and minds are blown, hearing both Knowles at once.

Ok, so technically Jay Z isn’t scheduled to perform at the fest…but we’d be lying if we said we weren’t hoping for an appearance from the MIA creator and organizer, and it seems only natural during headliner (and wife) Beyonce’s set.

Likelihood: Somewhat likely. I mean, they are “crazy in love” after all, right?