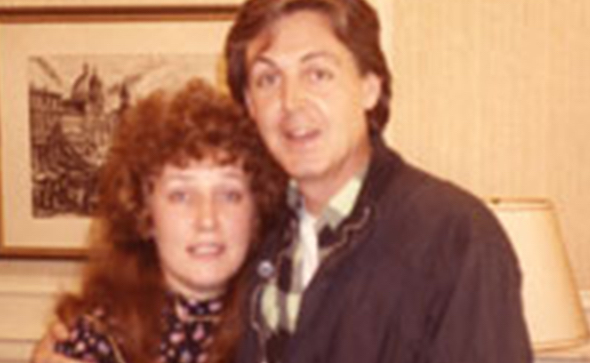 With the announcement of his brand new song called “New” and a forthcoming album of the same name, Sir Paul McCartney called WXPN today for an interview with mid-day show host Helen Leicht; you can listen to an archive of the entire interview below.

Their conversation began by talking about New, which will see a U.S. release on Concord Records on Tuesday, October 15th.

McCartney recorded the new album with a team of heavy-hitting producers: Paul Epworth (known for his work with pop sensation Adele), Ethan Johns (he’s recorded Ryan Adams, Ray LaMontagne and Kings of Leon), Mark Ronson (popular for his work with Amy Winehouse as well as his solo albums) and Giles Martin (who staged The Beatles‘ Love show). As McCartney explained in the interview:

Conversation turned to songwriting in general, and what keeps him at it. McCartney called it “an eternal fascination.”

“It really is just down to the fact that I love it. … If you said to me now that, okay, this afternoon, you’re just going to sit down and write a song. That wouldn’t depress me or frighten me, that would really excite me. I’d go ‘Oh, yeah, great great great.’And then taking it into a recording studio…and eventually you take it out on the road, and you play it for real people. That is the ultimate excitement. If you look at that whole line of stuff, it’s pretty cool.”

On revisiting his Beatles-era music when performing live, McCartney likened it to being somebody else reviewing a young man’s work. “I’m listening to myself as a 24 year old. As I’m singing the songs, I’m reviewing the lyrics and thinking ‘This kid wasn’t bad!'” Some moments, like “Being for the Benefit of Mr. Kite,” are downright challenging (“It’s contrapuntal, man!”). When Leicht pointed out that today is the anniversary of The Beatles’ final show in San Francisco’s Candlestick Park, McCartney began to reminisce, but with a footing in the present.

“It is great to look at the old newsreels. You go, oh my God, is that really me? Obviously it was another time, and yes, we were younger. It was very exciting in its own way. The 60s were very exciting times, and I meet a lot of younger people who say ‘Wow, I wish I’d been there.’ I say ‘Well, no, don’t wish that, just be here now and enjoy this one, because there’s plenty of cool stuff going on now.'”

Listen to Leicht’s interview with Paul McCartney in its entirety in the player below. To hear his new single “New,” go here.